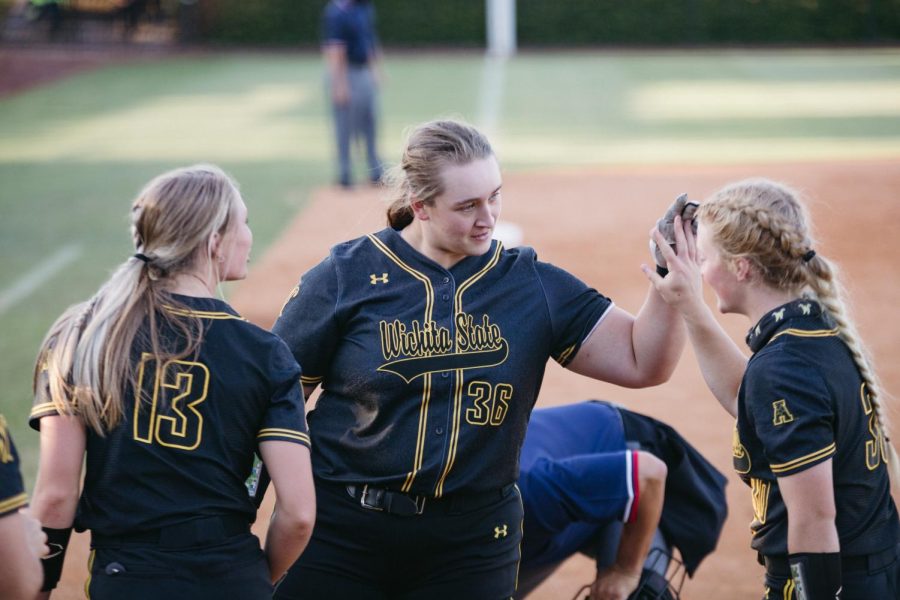 Wichita State sophomore Lauren Mills celebrates at home base during the game against Tulsa on May 14.

The Wichita State softball team will get to stick around for another game in the American Athletic Conference Tournament Championship. The Shockers beat Tulsa on Friday in the semifinals of the AAC Tournament with a 9-4 victory.

Tulsa got on the scoreboard in the top of the 1st, making it a 1-0 game. However, in the bottom of the 1st, senior second baseman Kaylee Huecker got the Shockers started with an RBI double, leading senior third baseman Ryleigh Buck to score.

The Shockers continued to pull ahead with three runs scored in the bottom of the 3rd, increasing their lead to 4-1. Tulsa added on another run in the top of the 4th. In the bottom of the 4th, sophomore designated hitter Lauren Mills hit a grand slam to help increase WSU’s advantage to 9-2.

Mills said when she got up to the plate, she was really focused on the current at bat and nothing else.

Tulsa scored two more runs in the top of the 6th, but it was not enough to seal the victory for them.

Prior to the conference tournament, the Shockers played Tulsa in a regular season conference series.  Despite the Shockers winning that series, they did not get a conference sweep due to Tulsa handing them a loss in the final game.

Buck said the team got to work right away after that series to see what adjustments they could make against Tulsa.

“When we got home we really started breaking down film, how they pitched us, and really how they got us out because at the end of the day when we are successful they are going to change something,” Buck said.

Senior pitcher Bailey Lange started in the circle for the Shockers. Lange allowed four runs and four hits in five innings. She struck out four batters and walked three. Juniors Erin McDonald and Caitlin Bingham pitched one inning of relief each.

The Shockers will play against the University of Central Florida in the championship game. Head Coach Kristi Bredbenner gave her thoughts on the matchup against UCF.

“They’re a great ball club, they’ve got great pitching, good hitters, they play the small ball really well, they play great defense,” Bredbenner said. “Obviously we ended with a tie at the end of the series there, so I definitely think they’ve had their sights set on us at the end of the year for a long time so it’s going to be a dog fight, and we are going to be ready for it.”

The Shockers will play the Knights on Saturday, May 15 at 1 p.m. This game will be shown on ESPN 2.