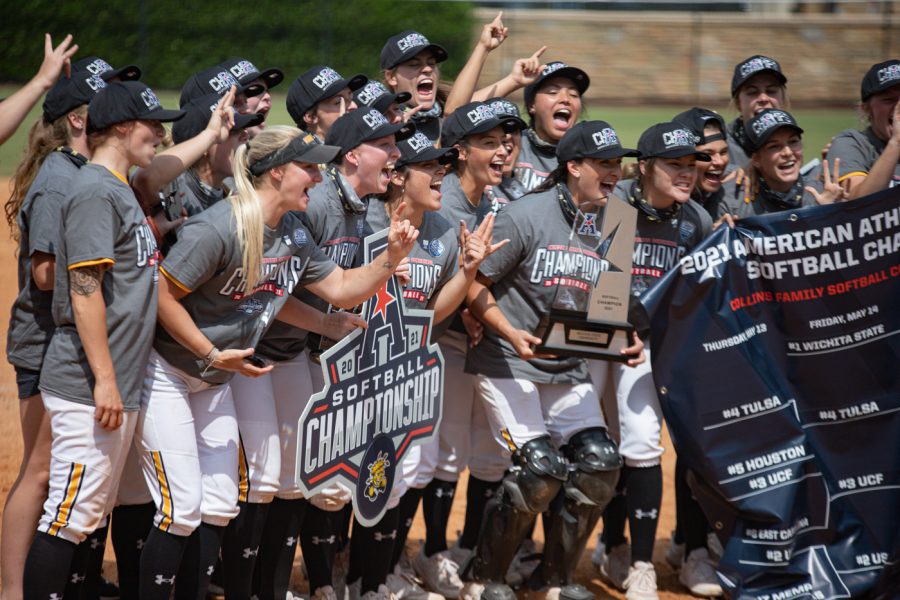 Shockers win first-ever AAC tournament tittle after beating UCF 7-4 in the championship game on May 15.

The Wichita State softball team can check off two goals of theirs for this season. They are now regular season conference champions and conference tournament champions. The Shockers beat No. 3 seed Central Florida on Saturday 7-4 to win the American Athletic Conference Tournament Championship.

After starting the game from behind, Head Coach Kristi Bredbenner said she reminded her team that there is still a lot of softball left to play.

“I just reminded them it’s a seven-inning game,” Bredbenner said. “It doesn’t end in the first inning, and we’ve got that same amount of energy to put into this game and a lot of time and a lot of swings to put us back into it. They battled, they had some huge at-bats, and you know I’ve got every confidence in the world in this team.”

In the bottom of the 3rd, freshman right fielder Addison Barnard hit a homer down the line, leading freshman left fielder Bailey Urban to score. This put the Shockers down by one with a 2-3 score.

The Shockers took the lead in the bottom of the 5th after senior catcher Madison Perrigan hit a three-run shot. Senior third baseman Ryleigh Buck then hit the Shockers third homer of the game on a two-run shot, scoring junior first baseman Neleigh Herring.

After five innings of play, the Shockers lead UCF 7-3. The Knights added on one more run in the top of the 6th.

Against Tulsa, Perrigan described her hitting as an off day. She said she was glad that she could put her team in a good position to win after hitting a three-run homer.

“I mean that’s a dream come true right there in that situation,” Perrigan said. “I knew there were a couple of instances yesterday whenever Syd and Addi were in scoring position and I didn’t get the job done, so today I just came through with a new mindset. I came up today and knew I just wanted to put the ball in play hard somehow and help my team and got the job done with a home run so I was really happy I got to do that for them”

Senior pitcher Bailey Lange started in the circle for the Shockers. Lange allowed six hits and four runs in six innings. She struck out one batter and walked zero. Junior pitcher Caitlin Bingham pitched one inning of relief.

Next up, the Shockers will head to regionals of the NCAA Tournament, after securing an automatic bid with their win on Saturday. Selection Sunday is slated for Sunday, May 16 at 8 p.m. on ESPN2.