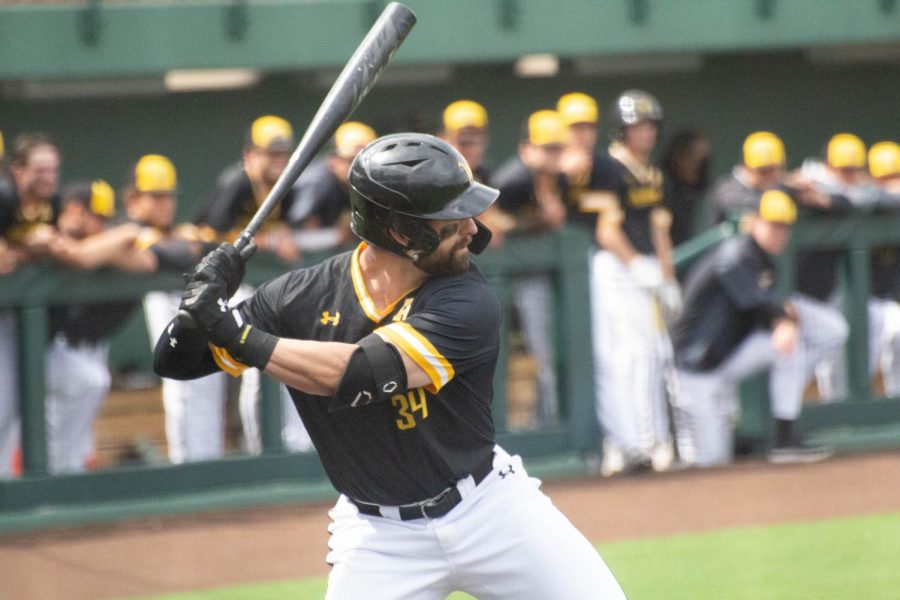 Senior Corrigan Bartlett prepares to take a swing during Wichita State's game against South Florida on Friday, May 14 inside Eck Stadium.

After dropping two of the first three games of their series against South Florida, the Wichita State baseball team picked up a 6-4 victory on Sunday, earning them a series split.

The Bulls jumped out to a quick first inning lead as senior starting pitcher Gareth Stroh allowed back-to-back home runs to open up the game. Stroh went on to throw two scoreless innings after the opening frame but would exit after four innings with WSU trailing 4-1.

“The effort and the attitude today is what we like to see,” head coach Eric Wedge said. “They came out and jumped on us quick. The first two pitches of the ball game left the ballpark. That’s not something that happens every day.”

The Shockers found a way to mount a comeback as following a Garrett Kocis sacrifice fly and Corrigan Bartlett scoring on an error, the deficit was trimmed to one run. The Shockers would come all the way back to tie the game at four with Ross Cadena scoring on a wild pitch in the bottom of the seventh inning.

The Shockers had a chance to take their first lead in the bottom of the eight. The Shockers loaded the bases up after a pair of errors from USF and Cadena due up at the plate with one out. Cadena pushed across another run as Seth Stroh scored to give the Shockers a 5-4 lead.

WSU would push across another run in the inning as Andrew Stewart, who reached on a fielder’s choice earlier in the inning, scored on a passed ball, giving WSU a 6-4 advantage.

“It’s awesome because that’s a whole team effort coming back in a game like that,” junior Aaron Haase said. “Doing that today, it’s awesome and then doing it at UCF was really good.”

After Stroh’s early exit, the Shocker bullpen did not allow a run in the final five innings. L.J. McDonough threw three scoreless innings in relief while collecting five strikeouts. Aaron Haase then entered with the game tied at four, and ultimately picked up the victory after pitched two scoreless innings to close it out.

Wedge said that when Haase enters the game, he helps to give the team confidence.

“It creates a different feeling for the end of the game for the entire team,” Wedge said. “Obviously, he goes out there and pitches with confidence, uses all his pitches, him and Ross (Cadena) work well together. The game just feels different when he comes in and that’s what you like to have with your back-end guy.”

With the series split, the Shockers will now have to win the conference tournament in order to make a return trip to the NCAA Tournament.

Haase said that even with the pressure heading into the final weeks of the season, the team is just focused on what they can control.

“Just keep going and keep pushing with what we try to push every day and let stuff take care of itself,” Haase said. “Just do what we can do and control what we control and let everything else play out.”

The Shockers will wrap up the regular season with a series against the Memphis Tigers at Eck Stadium. The series will start on Thursday with first pitch slated for 1 p.m.

“It’s a big series for us, they’re all big series when you get down towards the end of the year,” Wedge said. “Hopefully we learned a great deal from what we went through this weekend and we’ll be better for it next weekend.”