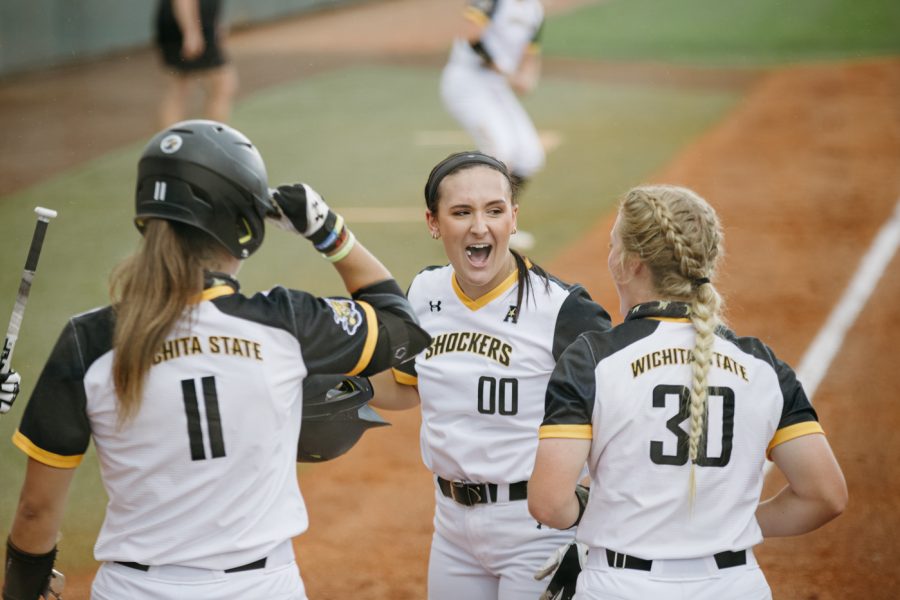 Wichita State senior Madison Perrigan celebrates with teammates during the game against Texas A&M on May 21.

The Wichita State softball team beat Texas A&M, 9-7, in the first round of the NCAA Regional Softball Tournament at Marita Hynes Field in Norman, Oklahoma, on Friday, May 21. The win marked the Shockers 40th win of the season and the second team in school history to have such a record.

Senior catcher Madison Perrigan got the Shockers started right away in the bottom of the 1st when she hit a two-run homer to left field, scoring freshman Addison Barnard. Texas A&M responded in the top of the 2nd with one run scored to make it a 2-1 game.

In the top of the 3rd, Texas A&M hit a home run and scored in one run to put them down by one with a 4-3 score. However, the Shockers improved their lead in the bottom of the 5th with five runs scored.

Perrigan hit her second homer of the game in the bottom of the 5th. This is the second time in NCAA play that Perrigan has hit two home runs in a game.

Perrigan said she knew she needed to be focused every time she stepped up to the plate to help her team seal the win.

“I was just really excited to put runs on the board in the first inning for the team and get us going in that way and the situation when bases were loaded and I struck out,” Perrigan said. “It was kind of like a humbling time, and I was like okay you’ve gotta be locked in on every single pitch. It was the best feeling ever knowing that it worked out for the team.”

Head Coach Kristi Bredbenner said she thought Perrigan’s home run in the fifth gave the whole team confidence that they were capable of holding out the lead until the end of the game.

“To me that was kind of the dagger of the game even though they never gave up but it kind of gave us that confidence of okay we’ve just got to hold on and get through this game and get there tomorrow,” Bredbenner said.

The Shockers will play Oklahoma on Saturday, May 21 at 3 p.m. at Marita Hynes Field. This will be the Shockers’ second time facing OU this season after falling to the Sooners 14-3 in the final game of the regular season.

“We just go in it fearless like we talked about all year,” Perrigan said. “Anything can happen when you believe, and they are a great team but so are we, and we proved that today coming out and getting the first win and we just gotta take that mentality tomorrow.”