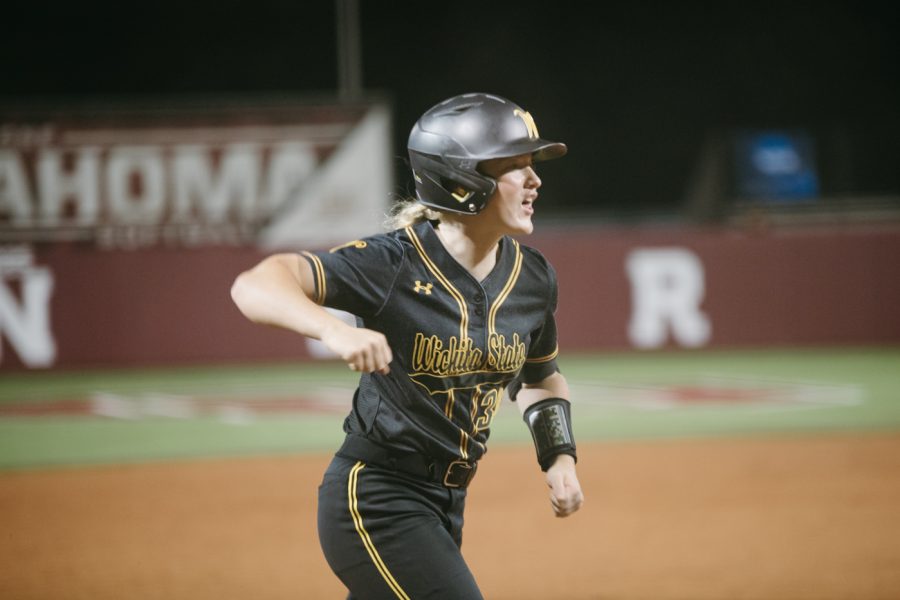 Wichita State freshman Addison Barnard runs home during the game against Texas A&M on May 23.

The Wichita State softball team had themselves a long day on Saturday, May 22 at the NCAA Regional Softball Tournament. The Shockers went toe to toe with No. 1 Oklahoma University. However, the Shockers lost to OU 7-5.

The Shockers started out in the lead when senior catcher Madison Perrigan hit a homer to left field in the top of the 1st inning.  OU then tied the game up in the bottom of the 2nd with a home run of their own.

WSU regained the lead again when senior third baseman Ryleigh Buck hit a homer to left field in the top of the 4th. OU answered back in the bottom of the 5th, by scoring six runs to give them a 7-2 lead.

Hitting two home runs against the No. 1 team in the country felt great to Buck. She had confidence going up to the plate after seeing her teammates hit off  OU’s pitchers.

Buck is from Wellington, Kansas, and said it especially feels like a dream to represent her hometown, and state while playing at a high level of college softball.

“I felt like honestly, the whole team was seeing the ball really well,” Buck said. “So I was just watching everyone else square up and I know if they’re hitting I am too. It really is a dream come true. Since I was little this is what I wanted to do. I’m living my dream right now. All I can say is keep fighting, keep working, just keep going. Anything is possible if you just set your mind to it.”

Senior pitcher Bailey Lange started in the circle for the Shockers against OU. Lange allowed eight hits and seven runs in 6.0 innings. Lange struck out two batters and walked three.

On Saturday night, the Shockers faced Texas A&M for the second time in their regional. The Shockers walked away with a 9-6 win against the Aggies to move on to the regional championship on On Sunday, May 23.

The Shockers started out in the lead against Texas A&M in the bottom of the third. Sophomore shortstop Sydney McKinney hit an RBI double, scoring freshman left fielder Bailey Urban. Freshman right fielder Addison Barnard then hit a homer to left-center to give the Shockers a 3-0 lead.

The Shockers gave themselves a 4-0 lead after a walk from Urban, scoring senior center fielder Bailee Nickerson in the top of the fourth.  In the bottom of the fourth, the Aggies hit a three-run shot, cutting the deficit to one run.

Junior pitcher Caitlin Bingham allowed seven hits and five runs in 5.0 innings. She struck out three batters and walked five. Lange came in for the save in the last two innings.

Head Coach Kristi Bredbnenner said that Sunday’s matchup against OU will need to involve the same mindset that the team had going into Saturday’s game.

“We gotta believe we got a chance, and take care of business,” Bredbenner said. “The targets on their back. They’re the ones that are supposed to be winning, and we are just here to try to and disrupt that as much as possible.”