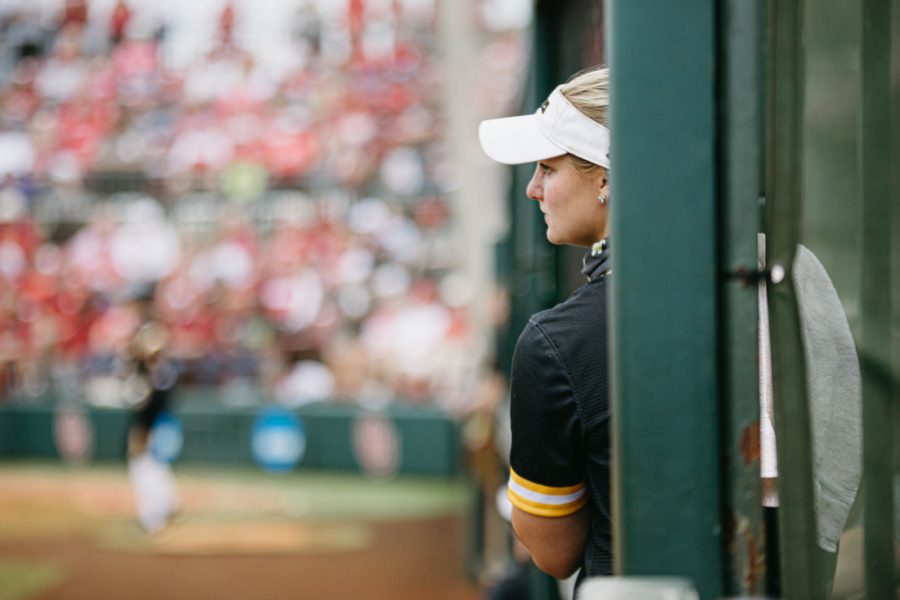 Wichita State senior Bailey Lange watches her teammates from the sideline during the Regional Final game against OU on May 23.

The Wichita State softball team’s season came to an end at the NCAA Regional Softball Tournament at Marita Hynes Field on Sunday dropping the Regional Final to top-seeded Oklahoma, 24-7. The Shockers finished with an overall 41-13-1 record for the 2021 season.

In the top of the 4th, OU added on three more runs to extend their lead 14-5. The Shockers scored their last two runs of the season in the bottom of the 4th. Herring hit a two-run homer to make it a 14-7 game.

OU capped off their win with ten runs scored in the top of the 7th.

Senior pitcher Bailey Lange got the start in her final game as a Shocker. Lange allowed five hits, and seven runs in 2.1 innings. She struck out one batter and walked three. Junior pitchers Caitlin Bingham and Erin McDonald pitched about 2.0 innings apiece.

Head Coach Kristi Bredbenner said she wanted her team to remember not the score so much from Sunday’s game but the effort and ability to go head to head with the No. 1 team in the nation and representing Shocker Softball on a national stage.

“The first thing that I told them is that when they look back I hope they don’t first think about how out of hand the score got in this game because you know we were much closer to being competitive with OU then what the score looks like and a bigger threat than what that score looks like,” Bredbenner said.

Perrigan said the Shockers struggled at the start of the 2020 season. The rest of the season was then canceled due to COVID – 19, and they finished with an 11-16 record. Therefore, she said it made this season even more special in addition to all their accomplishments.

“It was extremely special because no one expected us to come back and be good,” Perrigan said.  “We didn’t take one pitch for granted, and after games, we were dead tired because mentally and physically we gave 110% and that was just how invested and how special this team was.”

Six seniors will leave the team after this season. The example that the seniors set, and the efforts they made to advance the Shocker softball program is something that Brebenner said she is proud of.

“If you want to be the best you’ve got to put up the time being the best,” Bredbenner said. “We’ve had a foundation laid for a while now and it’s getting better, and better, and better. I think our kids that got to experience it this year will hopefully be inspired to continue to keep growing it.”