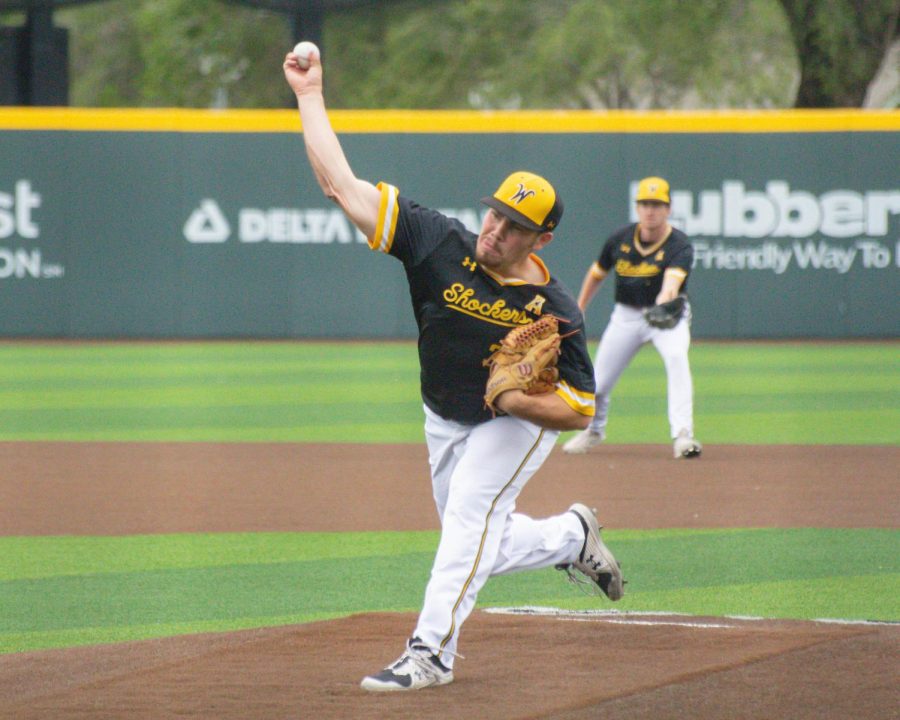 Freshman Jace Kaminska throws a pitch during Wichita State's game against South Florida on May 14 inside Eck Stadium.

Freshman starting pitcher Jace Kaminska headlined the awards by taking home the Newcomer Pitcher of the Year along with All-Conference First Team honors. Kaminska leads WSU with a 2.52 ERA in 11 appearances and nine starts this season. He is 7-1 on the mound and has allowed 15 earned runs on 48 hits with 45 strikeouts in 53 2/3 innings.

Haase has emerged as the Shockers’ closer this year and has collected eight saves, which is tied for the most in the conference. Haase is 2-1 with a 1.09 ERA this season. He has allowed only three earned runs this season on 12 hits with 24 strikeouts.

Although Kocis’ season was cut to only 33 games due to a wrist injury, he leads the Shockers with 12 homers, which is the fourth most in the conference. Kocis is hitting .298 for the season to go along with 37 hits and a team-best .685 slugging percentage.

Wallace has the second-best batting average on the team this year at .328. He has compiled 65 hits in 51 games played to go along with 10 home runs and a team-high 47 RBIs. His 47 RBIs are tied with teammate Corrigan Bartlett for the third most in the AAC.

In Bartlett’s first season with WSU after arriving as a graduate transfer from Saint Louis, he has a team-best .342 batting average. Bartlett has tallied 65 hits, including six homers to go along with his team-high 47 RBIs. Bartlett has also collected seven sacrifice flies which are the most in the AAC and sixth-best in the NCAA.

The Shockers will start postseason play this weekend at the AAC Championships in Clearwater, Florida. WSU earned the three-seed at the tournament and will face off against South Florida on Tuesday. The game will start 47 minutes after the conclusion of No. 2 seed vs. No. 7 seed game which is slated to start at 3 p.m. The Shockers game can be seen on ESPN+.

Player of the Year

Pitcher of the Year

Newcomer Position Player of the Year

Newcomer Pitcher of the Year

Coach of the Year