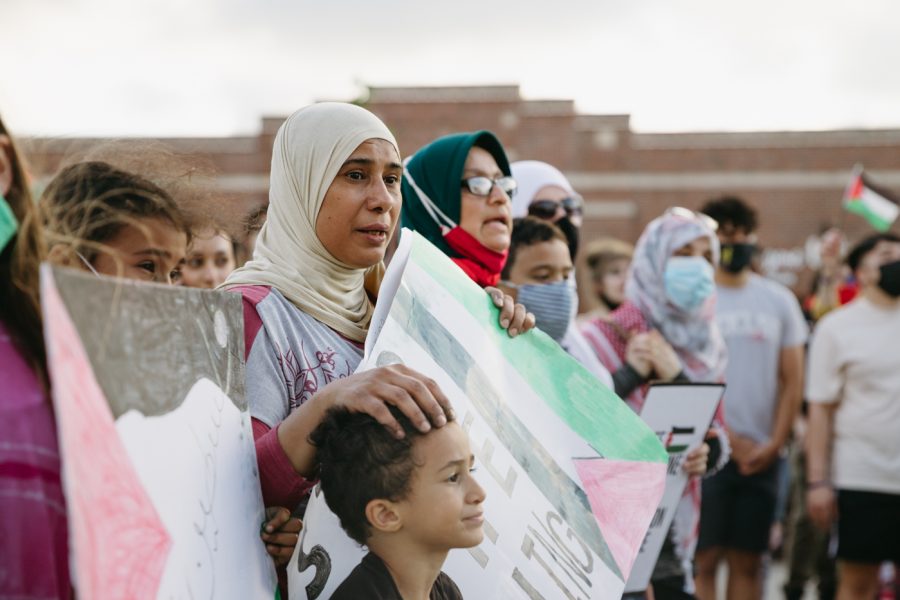 The Wichita community gathers to protest for Palestinian rights in Old Town Square on May 21, 2021.

For those of you who do not know me, my name is Lena Alhallaq. I am a first-generation Arab-American woman living in Wichita with my parents and three brothers. My grandparents on both sides fled Palestine to Qatar amidst the crisis with Israeli. My parents then met each other and married years later. The day after their marriage, they took flight to the United States to live a better life.

We were lucky, but to the Palestinians who were left in their home land, whether that be because they were unable to leave or chose to fight, were not so lucky.

Most Americans don’t think twice when we get up to choose our outfit for the day. We don’t have to worry about whether or not food is going to be on the table.

“What am I in the mood for today? Should I eat at home, or order take-out? Or maybe eat at a restaurant? I should invite my friends, too!”

We don’t think about the roof over our heads, the food on our table, the clothes on our bodies. We have the option of choosing who we hang out with, what we do for the day, what we wear.

We take these items and basic necessities of human life for granted. But not voluntarily; it’s just our routine. We remind ourselves to be thankful every now and then, but can we truly comprehend the idea of not having these things?

Could we imagine what our lives would look like?

Palestinians do not have to imagine.  They are being murdered on their own land. That is their reality. And they are fighting back.

The history of this apartheid dates back decades ago, but it’s important to analyze in order to comprehend how it came to what it is today. The Zionists managed to take most parts in Palestine in justification for gaining a land of their own, yet the Western powers who were in charge of the situation did not stop the escalation of a genocide. Here’s where you can find out more on the history and background of this matter:

Have the Zionists forgotten the atrocity that is the Holocaust, the systemic and state-sponsored cleansing and murder of more than 6 million Jewish men, women, and children? Do they not see the parallels between themselves and Hitler himself, the very man that brought shame to their people?

Do they not see themselves in the eyes of the dying children who lay in rubble as they walk past with their machine guns and protective gear? Do the men not think of their own family at home when they walk past Arab fathers holding their dying sons, sobbing and bellowing into the red skies?

They play a huge role in this crisis, but there are other catalysts that need to be talked about.

To the pro-Palestinian Arabs who say “f*ck all Jews” or protest with signs that say “Palestinian Lives Matter” or “End the Palestinian Holocaust”: just stop, because you’re doing more harm than good.

What good is going to come out of invalidating the movements of other minorities and using it for their own benefit? What good is going to come out of grouping all Jews as horrible people, claiming they’re the main cause of this mess? There are Jews in New York confidently joining pro-Palestine protests right in front of pro-Israeli marches. There are also Arab zionists and white zionists out there in the world. Did you know that? Are we just going to forget about those people and focus on targeting Jews as a whole?

I get it. Our Palestinian grandparents and parents have generations of first-hand trauma from Zionists and choose to group all Jews as bad people as a way to cope. But that’s the same thing as all Americans grouping all Muslims as terrorists after 9/11. Us younger generations need to change that narrative. We cannot fight injustice with more injustice.

To the Americans or anyone living in a third world who choose to be silent: how are you going to tell me that posting on social media has no benefit to the situation? The very people we post about and who are dying overseas are actually the ones encouraging our activism, pleading for us to be their voices.

I remember in history class we would learn about the Cambodian genocide, the Rwandan genocide, the Holocaust, and think to myself, ‘how sickening would it have been to live in a time like that? Were there no sensible people back then to stop this?’ Well, here we are now, and it’s safe to say that I’ve never been more disgusted.

To those around the world ‘protesting’ while dancing and playing Palestinian music: how about we save the festivities until after Palestine is free? You’re painting this movement as a concert, a way to have fun. You’re making others think that perhaps the issue is not as severe as it seems to be, and that is NOT what we’re trying to say here. When our people are dying, there is no reason to celebrate. Take your speakers away, and listen to our solidarity for our dying sisters and brothers instead. Do better.

The bravery of dying Palestinians have to even think about speaking up about their rights, while some of you don’t even bat an eye. Check your privilege.

America has truly created an alternate narrative of the world, but let me tell you this: I know who’s silent, yet are active on their social media. I see you, and I am truly disappointed. I’ve seen the ones who value me as a person, yet are silent. As a first-generation Arab-American woman, you are actively disrespecting me, my family, and my homeland. But stay comfortable!

Remember the red henna you have painted on your hands that may serve as a reminder of the bloodshed on Palestinian soil. Remember the hijabs that are worn as fashion statements amongst Western societies that mothers use to soak the blood of their fallen children, that are ripped off from their heads, that fall onto the Earth’s soil with the rest of the casualties, the very symbol of Islamic faith. Remember the adoption of Kufiya patterns in Western stores yet Palestinians were chastised and berated as terrorists for wearing them, the symbol of their culture, their history, their deceased, their people, Palestine. Westerners take our culture for their aesthetic while turning a blind eye to the ethnic cleansing of our people.

They say take pride in your ancestors and family, your origin, your land, but how can I when the second the word “Palestinian” comes out of my mouth, the atmosphere in the room, the look on their face, changes? How does it look for a child when she’s told that “you’re not who I thought you were” the second she reveals her identity? Why did I feel the need to lie when people asked me where I was from? Why did I hesitate? Because I was taught to keep myself safe, but enough is enough. I will not keep quiet.

How long are we going to keep doing this? We see a huge bombing, we post about it, we move on. A big incident happens yet again overseas, we freak out for a week, then we move on. Do people not see that this is happening every day? There are many hypothetical questions in this opinion piece, but it’s because I am genuinely and utterly confused by multiple groups of people.

This is not a call for you to pick sides. This is not a fight on religion. This is not a conflict. This is not complicated. This is an extremely simple matter. And for those who still choose to be silent because they’re “not educated on the subject”, let me dumb it down for you: human beings are being killed.

We are in the midst of ethnic cleansing and genocide. If you truly only perceive politics and economics when you see a picture of a dying child with half their body scorched off, then you’re missing the big picture: Palestinians are being murdered on their own land.