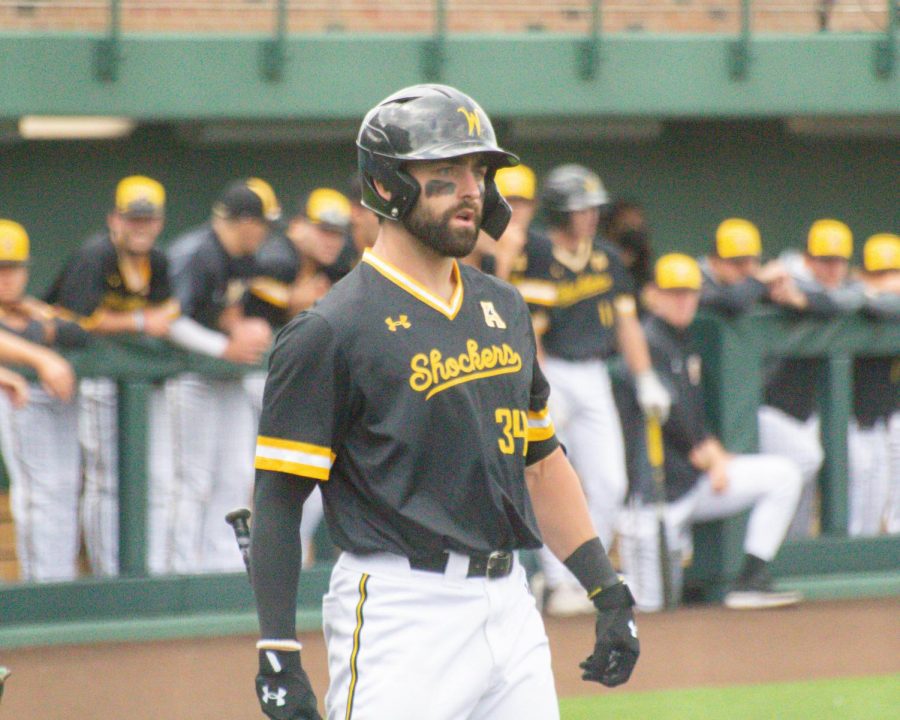 Senior Corrigan Bartlett reacts to a call during Wichita State's game against South Florida on Friday, May 14 inside Eck Stadium.

The Wichita State baseball team dropped their opening game of the AAC Tournament to South Florida, 7-2 on Tuesday.

The Bulls jumped out to an early lead with three runs in the top of the first inning. The Shockers’ starter Liam Eddy only secured two outs in his outing, allowing all three runs. The Bulls added two more runs in the second inning from a two-run home run from Roberto Pena, increasing their lead to 5-0.

“Anytime you’re in a tournament and you can’t get out of the first inning of the first game, you’re up against it and that’s exactly what happened today,” head coach Eric Wedge said. “Then we got a little bit sloppy after that. Our bullpen did a great job of keeping us in the ballgame.”

The Shocker offense battled back in the bottom of the third as Couper Cornblum leadoff the inning with a triple. Cornblum would come around to score later in the inning on an RBI groundout from Andrew Stewart, cutting the deficit to 5-1.

WSU would get another leadoff triple in the fifth inning, this time from Corrigan Bartlett. Similar to Cronblum, Bartlett would come around to score on a sacrifice fly off the bat of Cornblum, cutting the USF lead to 5-2.

The Bulls added on two more runs in the top of the eighth inning as George Cantu launched USF’s second homer of the game which increased their lead to 7-2.

The Shocker bullpen was key in keeping the Shockers close throughout as L.J. McDonough, Ryan Stuempfig and Foster Gifford combined to allow four earned runs in 8.1 innings of work.

Wedge said that when the team falls behind early, it is up to offense to pick the team up.

“We were able to control the bleeding a little bit, but that’s when the offense has to step up,” Wedge said. “If you’re a good ballclub, different areas of the team step up when other areas don’t. That just didn’t happen tonight.”

Wedge said that with the all around struggle, it is important for the team to use tonight’s loss as a wake-up call.

“I think it’s a combination of these veteran players not stepping up like they need to and you’ve got some of these younger players developing and just not quite where they need to be yet,” Wedge said. “It starts with starting pitching and their guy was able to control the ballgame, we were not.”

With Tuesday’s loss, the Shockers are forced into an elimination game Wednesday evening against Houston. The contest will begin 47 minutes following the conclusion of the day’s 2 p.m. opener and can be seen on ESPN+.

Wedge said that the team has to take advantage of the opportunity to put Tuesday’s loss behind them.

The Shockers haven’t faced off against the Cougars since they opened up conference play with eight straight games against them. WSU won seven of the eight games including a sweep during the series in Wichita.

Wedge said the key for them to continue that success is to refocus heading into Wednesday’s matchup.

“They’re gonna be hungry but we need to be hungry too,” Wedge said. “I think whoever’s able to separate a little more clean coming into tomorrow and refocus and dig deep for that confidence and the work they’ve done, that team’s going to have an edge.”