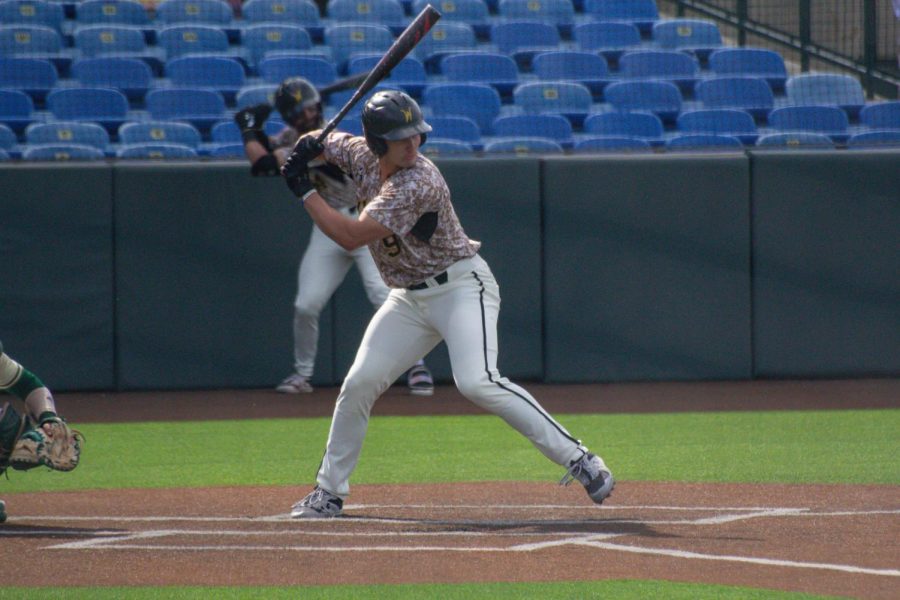 Freshman Chuck Ingram prepares to swing during Wichita State's game against South Florida on Saturday, May 15 inside Eck Stadium.

From a young age, Wichita State freshman Chuck Ingram could tell that he wanted to be a baseball player.

Growing up, Ingram’s father played two years in the minor leagues for the South Bend White Sox following his collegiate career at the University of New Orleans, which inspired Chuck to enter a similar path.

In high school, Ingram played both baseball and football but could tell that he had a different level of interest for baseball. Ingram said that was largely due to his father’s baseball background.

“Obviously because my dad played in college and pro ball which was pretty amazing because he’s helped me in a ton of ways and he has really good knowledge of the game,” Ingram said. “He still helps me to this day, he’ll send me videos of me hitting and tell me what things to fix. It’s really cool to have a dad that’s been so involved with the game.”

Ingram was a two-year starter for Rockhurst High School and posted a career batting average of .318 during his time. Ingram also helped lead them to a state quarterfinals appearance, while also being awarded with second-team All-State.

When it came time to pick a college to continue his baseball career, Ingram picked Wichita State, largely to the program’s new culture under head coach Eric Wedge.

“I came down here for our camp, I didn’t have too many offers at the time coming out of high school, I was kind of a late bloomer,” Ingram said. “I came to a camp here and recognized there’s really good coaches here and my dad had a buddy that played here with Wedge in ‘89 and won the national championship. So, I came down here, they offered me and committed after a day or two because I recognized the good stuff that was going on down here.”

When Ingram finally arrived on Wichita State’s campus this fall, he had low expectations for his role on the team. Ingram was rehabbing after wrist surgery, which took him some time to get healthy.

“I worked really hard in the offseason, especially with my hitting,” Ingram said. “So, when I got back for the spring I didn’t really have any expectations. I just went out and played and started doing really well in our scrimmages.”

Although Ingram didn’t expect it, he got an opportunity to show his abilities this spring. On April 10, starting first baseman Garrett Kocis went down with a wrist injury that forced him to miss over a month. Ingram was called upon to help fill that void and started 15 games over Kocis’ absence.

“I haven’t played first base since I was probably 12 years old so that was tough adjusting and everything,” Ingram said. “It’s definitely been cool to step in as a freshman and play. It’s a good time.”

Everything clicked at the plate for Ingram in the Shockers’ series against conference-favorite East Carolina. Ingram went 5-11, including two home runs to help lead the Shockers to a series split with the Pirates.

For his performance, Ingram was selected to his first ever AAC Weekly Honor Roll.

“You always look on your Twitter and stuff, all the kids that have been winning that stuff and it’s always a goal,” Ingram said. “It’s something that’s in the back of your mind that you want to achieve so to actually do that is really cool.”

Ingram and the Shockers are looking to return to the NCAA Tournament for the first time since 2013. WSU will need to win this week’s AAC Tournament if they want to make that return happen this year.

Ingram said it would be special to be a key piece in helping bring the program back to where it once was.

“It’s been so long since we’ve been able to make a regional, I think it’s really special especially for the town of Wichita,” Ingram said. “It’s a baseball town, they want to see us in the postseason, they want to pack out the games, they want to have packed stands. I think everybody wants to see us get back to that point, where we could host a regional and see a bunch of fans in the stands.”

Ingram and the Shockers will play their second game in the AAC Tournament on Wednesday against Houston in an elimination game.