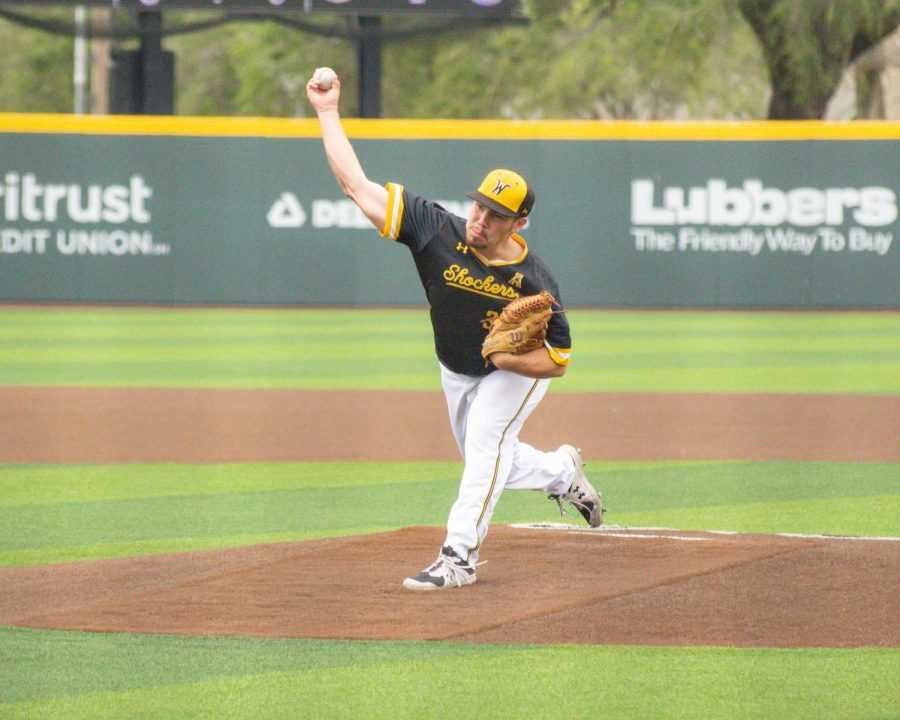 Freshman Jace Kaminska throws a pitch during Wichita State's game against South Florida on May 14 inside Eck Stadium.

With their season on the line, Wichita State defeated Houston, 5-3, on Wednesday night to stay alive at the American Athletic Conference Baseball Championships.

The game was scoreless through the first four innings, but the Shockers were able to take a 2-0 lead after Paxton Wallace launched a two-run home run to give WSU its first lead of the tournament.

“Paxton’s done a great job of setting the tone for us, whether it be early in the ballgame or in the middle,” head coach Eric Wedge said. “That’s his job. When he comes up, obviously he’s a presence in our lineup and has the ability to change the ballgame around.”

The Shockers would add onto their lead in the bottom of the eighth inning, as they tallied three more runs. Hunter Gibson launched WSU’s second homer of the game, with a two-run shot to left field. Couper Cornblum would help add one more run, with an RBI single driving in Corrigan Bartlett, to give WSU a 5-0 cushion.

Jace Kaminska delivered another outstanding performance on the mound for WSU. In 8.1 innings of work, Kaminska allowed one earned run on three hits and six strikeouts. Kaminska’s lone earned run came in the top of the ninth when Houston’s Kyle Lovelace launched a home run over the left field fence to cut the deficit to 5-1.

“He was outstanding,” Wedge said. “He set the tone early, defensively we helped him out early, made some plays, you’ve got to do that. I love his composure, especially for a young person going through a lot of firsts for him and did a great job.”

Head coach Eric Wedge ultimately decided to pull Kaminska and brought in closer Aaron Haase to secure the final two outs. Haase gave up two earned runs in the final inning but helped clinch 5-3 victory with a groundout to end the game.

Kaminska said that even with the season hanging in the balance with this start, he didn’t feel much different than any other start.

“I didn’t feel pressured at all, I felt pretty loose that whole game,” Kaminska said. “For it being that big of a game, I was just loose, I don’t know what it was. No nerves got to me pitching, adrenaline wasn’t crazy or anything. I knew how important it was but it was a little different.”

Kaminska has had one of the most successful freshman seasons in WSU history and leads all Shocker starters with a 2.32 ERA in 12 appearances and 10 starts this season. He is 8-1 on the mound and has allowed 16 earned runs in 62 innings.

Kaminska said the main improvement from the beginning of the season has been his breaking ball.

“I think my breaking ball has come a long, long way,” Kaminska said. “I was in the bullpen earlier this year and I didn’t have much of a breaking ball and then I developed one and I started starting. I’m really able to hit spots, tonight I felt I was really good about hitting spots and then my misses were good for the most part.”

After WSU’s loss to South Florida on Tuesday, Wedge called out some of the veterans on the team for their performance. The Shocker upperclassmen responded in Wednesday’s win, with juniors Paxton Wallace and Hunter Gibson driving four of the five runs in the victory.

Wedge said he was impressed with their response against the Cougars.

“For a lot of these guys, those do or die games in tourneys are foreign to them,” Wedge said. “We talked a little bit before the ballgame and there’s a certain mindset you have to have but still be able to drop your shoulders and go out there and be free and easy. I felt we were a little better with that tonight but I still feel there’s more in us.”

With Wednesday’s win, the Shockers advance to another elimination game on Friday evening against the loser of South Florida/Tulane. The contest will begin 47 minutes following the conclusion of the day’s 2 p.m. opener and can be seen on ESPN+.