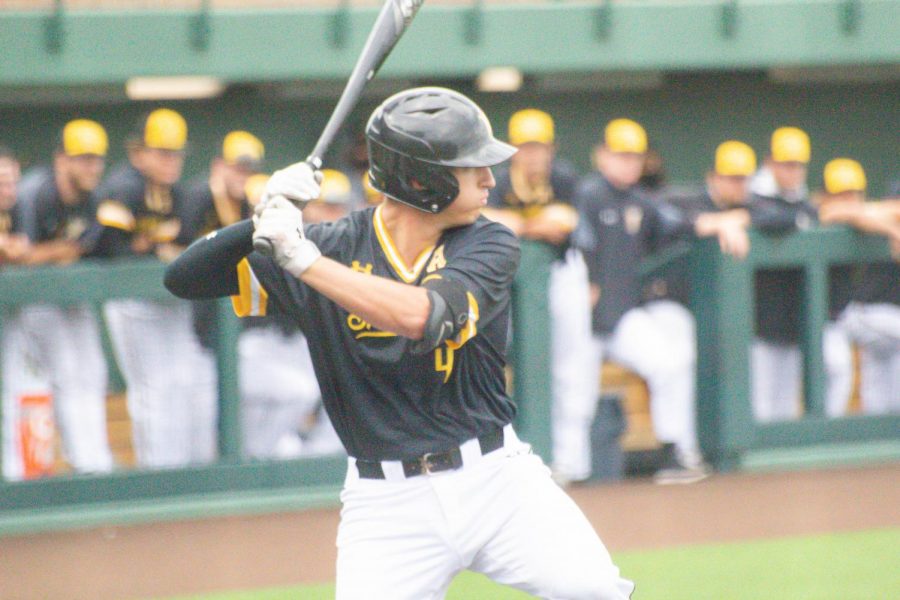 Freshman Couper Cornblum prepares to take a swing during Wichita State's game against South Florida on Friday, May 14 inside Eck Stadium.

Wichita State outfielder Couper Cornblum and the Shockers were off to one of the best starts in program history. WSU was 13-2 and was riding a 13 game winning streak, the longest since 2008. Then it all came to a halt, with the season being canceled.

Cornblum said that with the success he and the program were having, it was tough to have that come to an end with the season’s cancellation.

“To have that canceled was hurting to us because the success of our team brought a lot of excitement to us and around Wichita because having the baseball program get on the right track was something that was nice to see,” Cornblum said. “The early success last year felt good but it kind of hurt because having the season canceled, I felt that I was contributing, putting my team in a position to win. To have that all go down because of COVID was really hard.”

Cornblum was recognized as the American’s best freshman by D1 Baseball, but for him the most important thing was being able to contribute.

“Coming in as a freshman, being able to contribute is always a big thing,” Cornblum said. “A lot of freshmen didn’t get to play and having success early was really cool. Just being to come in and make an impact, that’s always something you want to do each game. It’s special to be able to do that.”

Heading into his second season with WSU this year, Cornblum was awarded on the preseason all-conference team.

Even as the accolades rolled in, Cornblum said he remained focused on helping the Shockers win.

“I didn’t really have big goals, my goal is to come into each day and game and try to contribute in some way to help my team win. I have daily goals, not big set goals but try to put my team in position to win each day.”

Cornblum has followed up that success from a year ago and is currently hitting .290, including a team-best five triples. Cornblum’s 45 hits this season are the fifth-most on the Shockers.

Cornblum said that the biggest difference between the two seasons has been the ability to experience a full season.

“You play 15 games, you’re still full of energy, at the end of a full season, it’s a grind,” Cornblum said. “This is my first full season so each day I’m just learning and working on myself and working out habits of baseball. I’d say that’s the biggest difference, just being able to continue on and realize what a full season of college baseball is like.”

Cornblum said that the coaching staff has been intirical in helping grow through these first two seasons.

“Being able to have two guys that have made it to the professional level and played at that level and just hearing and experiencing and being able to pick their brain, it has been really awesome,” Cornblum said. “Having that type of knowledge within the clubhouse and around the field, every day is something special and not a lot of programs get that.”

The Shockers currently sit one game away from the semifinals of the American Athletic Conference Tournament. The Shockers will need to win the tournament if they want to return to the NCAA’s for the first time since 2013.

“Just in our second year with a new staff, is what I’d consider a quick turnaround into turning the program around,” Cornblum said. “It’s a fun aspect because we’re winning but just being around the team and how close-knit the team is, it’s really just fun to be able to go to the ballpark each day and play with these guys. The commodity of this team is something special.”