Baseball’s season ends with loss to Tulane in AAC Tournament 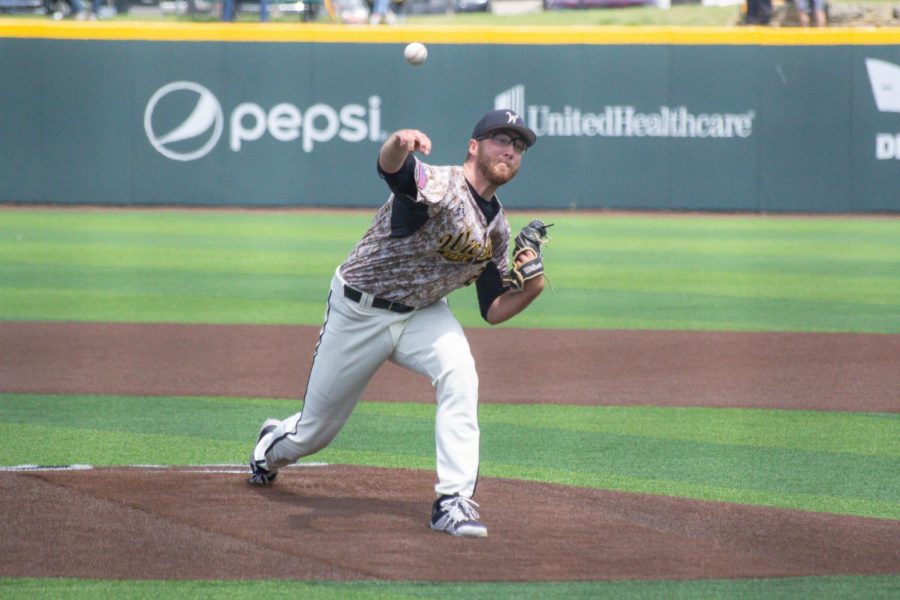 Senior Preston Snavely throws a pitch during Wichita State's game against South Florida on Saturday, May 15 inside Eck Stadium.

The Wichita State baseball team’s season came to a close on Friday, with a 12-2 loss to Tulane in an elimination game at the American Athletic Conference Tournament.

After Tulane took a 1-0 lead after one inning, the Shockers came back to tie the game, in the second inning, 1-1, with a Corrgian Bartlett solo home run to left field. The homer was Bartlett’s seventh homer of the season.

The Shockers would take the lead in the fourth inning as Garrett Kocis drove in Bartlett on a two-out RBI double giving them a 2-1 advantage.

Tulane would regain their lead in the top of the fifth as they scored four runs to take a 5-2 lead. The Green Wave would plate seven more runs in the bottom of the fifth giving them a 12-2 advantage. The Shockers were held scoreless in the final two innings as Tulane went on to run rule WSU.

Starting pitcher Preston Snavely received the loss on the mound after giving up four earned runs on six hits with four strikeouts and two walks in 3 1/3 innings.

“He was very consistent for us,” head coach Eric Wedge said. “Obviously coming over here for one year and late in his collegiate career, that’s not an easy thing to do. He should be very proud of the year he had. He’s a good teammate, a good person and cares about the right things. We were proud to have him.”

As Wedge met the team following the season-ending loss, he told them to do some reflecting heading into next season.

“I just asked them to do some reflecting both individually and collectively,” Wedge said. “Obviously it’s a disappointing way to go out but it’s ultimately a way to get better moving forward. Not just today, but this entire tournament. Everything that we went through this season is going to be stepping stones for us to get better and make adjustments and some changes moving forward.”

Wedge said that despite the disappointing ending, this season was pivotal in bringing WSU back to its goal of returning to the postseason.

“I’m never going to be as happy as I want to be until we’re a championship caliber ballclub but that’s everything we’re working for,” Wedge said. “If we do a few different things down the stretch in this tournament, we might continue to be playing, so we’re that close. These kids made a lot of progress this year.”

Wedge said that one of the team’s areas of improvement for next season is finding consistency, no matter the opponent.

“It’s our job to make sure that we help point them in the right direction,” Wedge said. “It shouldn’t matter who we’re playing, it should matter how we play. When we get to the point where we can know what we can count on day in and day out, we’ll be a much better ballclub. We’ll be able to play much deeper into the postseason. ”