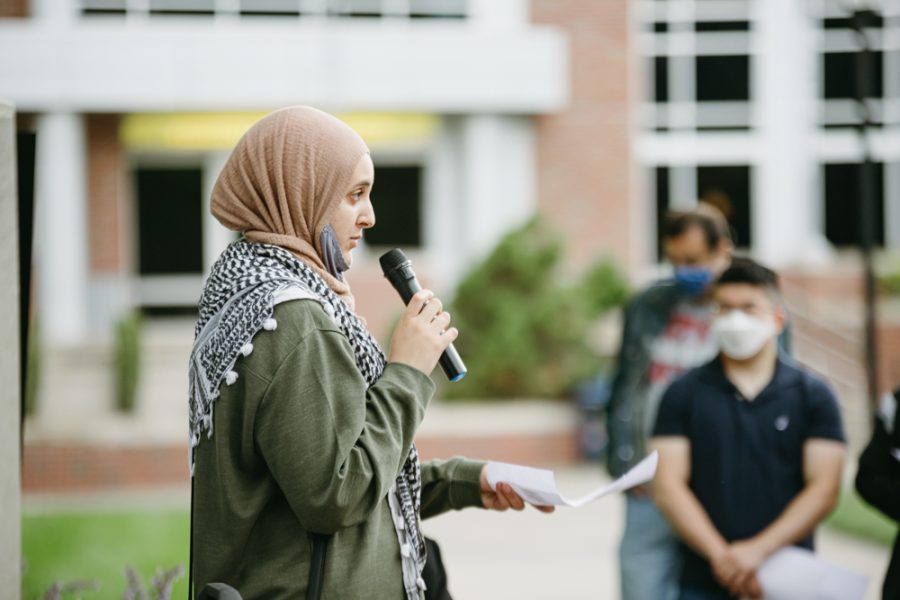 Senior Noor Abdalla speaks during the vigil honoring Palestinians on May 30.

Roughly 30 students showed up to the event, all there to show support and stand up for the hundreds of lives lost.

“I’m here obviously in support of the Palestinians,” Alia Haidar, an electrical engineering student said.  “To make awareness of what’s going on.

“The media has one way of portraying what’s going on, and what is actually going on is being hidden.”

Aram Khader, a junior majoring in management information systems and a Palestinan American, came up with the idea to hold this event and organized it with the help of other students.  Khader said she wasn’t initially planning on holding this event but was honored to have the help to put it on successfully.

“Everything that has been going on in Palestine has been so disappointing,” she said. “I’ve seen it around other cities as well, bigger cities, bigger populations of Palestinians where they decided to honor the lives of everyone lost so I decided to take initiative in my own hands since I knew no one else was doing it.”

Khader said that it is important for WSU to show solidarity with Palestine. She said that even though some people may not fully understand it, it isn’t a complicated issue.

“It’s really just a humanitarian issue about innocent Palestinian’s dying and I think that’s the only reason we are here right now, to honor the lives of innocent people as well as educate people about the consistent genocide that’s going on in Israel now, it’s been going on for 73 years,” Khader said.

“We are here to take a stand.”

The event included a reading of all the names and ages of the children who died in the attacks, speeches from the event holders, and educational resources to help people educate themselves on the current situation.

“We will never be able to compare ourselves to their sacrifice.”

Also in attendance was Student Body President Rija Khan. She said that she attended to both educate herself and take a stand against the tragedies happening in Palestine.

“I think that what is happening in Palestine is inhumane,” Khan said. “Hearing the stories of people who have experienced this firsthand, or their family members, it’s heartbreaking because no one should go through this situation.

“So the simple purpose of showing up was to learn more and support the people who need it.”

Khan said that it is clear that students who attend WSU are being directly affected by this situation and it’s important to be supportive and empathic for those who may have lost someone.