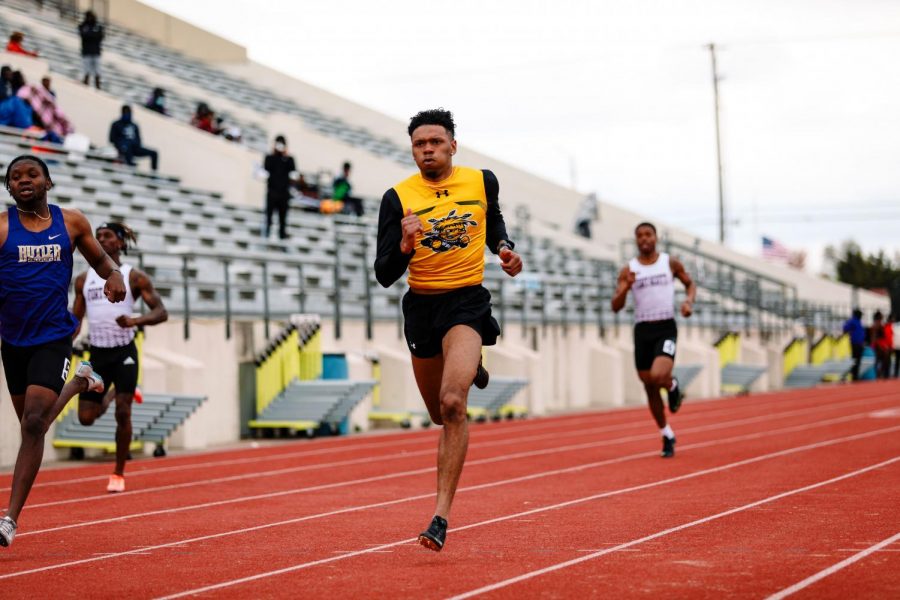 Antonio Norman and Michael Bryan both punched their tickets to the NCAA Championships last weekend after qualifying at the regional meets on the campus of Texas A&M.

Director of Track and Field Steve Rainbolt said it is special for both athletes to have the chance to compete at this championship event.

“This is a super exciting time of the year obviously and any athlete that advances to the Finals of the NCAA Championships, it’s a huge honor and a huge accomplishment,” Rainbolt said. “I’m excited to see how these guys handle it and how they do. I think they’ll both do great. They’re both accomplished athletes and they both have had great seasons.”

In Norman’s case, he advanced to the championship meet in the 100-meter hurdles. Norman ran a time of 13.63 which was third-best in his heat, earning himself an automatic qualifier to Eugene.

When Norman arrived on Wichita State’s campus last fall after transferring from Lindenwood University, the 100-meter hurdles were new to him. He had primarily ran the 400-meter hurdles but Rainbolt said he felt that Norman could have success in the higher hurdles.

“It was evident to me really quickly, man I think you can run the high hurdles,” Rainbolt said. “He was open to trying it and he was a beautiful hurdler already. It was just that he was running over 36 inch hurdles in the 400 meter hurdle. He took to it quickly, it was just a fairly easy transition for him. He’s just a really good athlete and a high quality, athletic guy.”

Norman said that it has been special to find this kind of success adjusting to the 100-meter hurdles.

“It’s really my first time doing it,” Norman said. “I’m normally a 400 meter hurdles so adjusting to that, played a big deal. It’s a big deal for me because where I come from in Saint Louis, not a lot of people make it that far in the NCAA’s. So, it’s a big thing for me.”

Despite this being Norman’s second season as a Shocker, this has been his first full outdoor campaign. Norman and the rest of the country’s season was cut short due to COVID-19.

Norman said that the work that he put in during that time has been pivotal to the success he’s having now.

“It was most definitely needed because I know some people took that time off and just sat down and chilled,” Norman said. “Coach didn’t allow us to do that, he made sure we stayed working out and sticking to the script.”

Norman said he is nervous heading into next week because it is something he has looked forward to for his entire collegiate career.

“I’m really anxious and ready for it because I’ve been training my whole career,” Norman said. “Last year messed up a whole lot of stuff because COVID and all that hit but I’m excited that they’re allowing us to do it this year so I’m ready.”

For Michael Bryan, his unbelievable season with the Shockers has continued. After walking on from Hutchinson Community College and being cut from WSU’s, he has now clinched a berth to the NCAA Championships.

Rainbolt said that Bryan’s development over the past couple years has been remarkable.

Bryan clinched his championship berth with a throw of 66.30m/217-6 in the hammer throw to earn ninth and advancing to the championships.

Bryan said that it is a special accomplishment for him to be able to qualify for the event.

“It’s really special for me because I know prelims is kind of the test and Nationals are the reward. So now, I’m just ready to reap that reward because only 24 people in all NCAA get to go to this and I just so happen to be blessed to be one of the 24.”

Heading into the meet in Eugene, Bryan said he is focused on relaxing and trying to have fun.

“My mindset is to just relax and have fun. I know if I think too much about doing or well competing hard for a podium spot, like if I try to get No. 1, I won’t get No. 1. That’s just how psychology works for me so I’m really just trying to do my best and at least have fun at this meet.”

Bryan said that he has a goal of finishing in the top-three to cap off his extraordinary season.

“Getting to that point would be extremely special because my whole family is looking forward to watching it and all my friends, I just don’t want to let them down,” Bryan said. “I know I won’t let them down but getting a top-three finish would be something extraordinary. That’d be one milestone I did not set.”

Norman and Bryan will compete in the NcAA Championships on June 9 in Eugene, Oregon on Hayward Field.