Get to know Muma: Q&A with newly-selected president 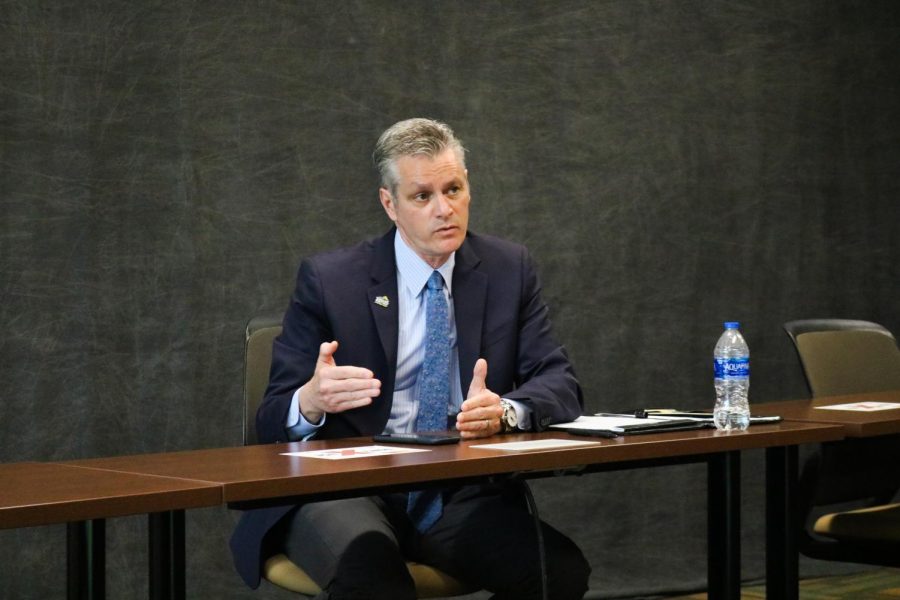 Wichita State President Dr. Richard Muma named the 15th president at Wichita State. Muma meets with The Sunflower staff to discuss next semesters goals for the University in the fall on June 10.

Rick Muma has been at Wichita State University since 1994. Now, 25 years and four presidents later, Muma is president of the university.

Muma has held different forms of the presidency multiple times. After former President John Bardo’s death in 2019, Muma held the acting president role. In 2020 after the sudden resignation of Jay Golden, Muma was once again acting president until he was selected as interim president.

The Kansas Board of Regents selected Muma in May after a months-long closed presidential search.

The Sunflower sat down with Muma on Friday, June 10 for an interview discussing Muma’s goals and vision as president of WSU.

Responses have been edited for length.

What does shared governance mean to you and how do you feel about it?

I think it’s central to what we do. This is something I’ve said as provost and will continue to talk about as president. The strictest definition of shared governance is that you’re engaging with the groups of people that are going to be affected by a decision. So in that case, in the university it’s going to be faculty staff and students, but you know sometimes we’ll be much more focused around faculty when it really involves a faculty issue.

I’ve been around long enough to know that if we are going to be successful moving forward and not be criticized every decision has to involve all people in the very early stages.

Where do donors and big business leaders come into play?

We have 13,000 donors every year so I think when people think of donors that think, you know, multi millionaires and high level individuals but we have all kinds of donors at the university.

In terms of shared governance around any particular issue, I’m not going to reach out to donors about helping make any decision, but I might reach out [to donors] on what they might think about it. (I make) sure people understand broadly in the community … what our story at the university is, what’s our vision, what are we trying to do. So in that case, I might ask an alum or a donor.

You were around during President John Bardo’s time at the university. His main vision for WSU was to expand innovation and focus on the innovation campus. Do you plan on furthering that vision? If so, how?

The short answer is yes, we are going to continue to move forward to expand our campus for the benefit of students and faculty.

My goal would be to make sure that anytime we consider any new partner on campus— particularly ones that want to be located on campus— that they’re deeply understanding our need to provide these applied learning experiences that benefit students not only in our education but help them pay for their education as well, and also help faculty with their research.

You have said in a previous press conference that it’s not unusual for a president to die and a president to resign, it’s just unusual to happen so close to each other. However, it seems unusual for a president to resign after only nine months on the job. Jay Golden was inviting donors to his installation ceremony that was months in the future the morning he resigned, so it’s clear to everyone that leaving wasn’t his idea. Does this worry you in your decision making in the future, knowing how abrupt and unexpected Golden’s departure was?

It doesn’t worry me. I just want to be really clear, I’m clear on who I am and what I’m doing here at this institution and what’s important to me to move the university forward, and understanding that not everybody will agree with that. But I’m really clear on that. And I’m not going to lose sleep over it.

What I will tell you is that I’m also someone who makes sure that I’m clearly communicating what I’m doing at the university and what we’re engaging in and making sure that the Board is aligned in that and understands that and also engaging with them to help them move their goals forward.

Your role is a tricky one. While you do work for the students and the campus community as a whole, your boss is the Kansas Board of Regents. How do you find that balance with shared governance— letting faculty, staff and students make decisions with you— and also making sure that you’re keeping up with the Board?

It is sort of a balancing act. But I also want to let you know that the Board of Regents cares deeply about higher education, so we have common interests. You all hear about things, and they get reported or you investigate on your own that sometimes might become a distraction and people start having views that may be negative toward [the Board].

But they really have the best interests of the university. It goes back to what I was telling you earlier, to have constant communication with the Board.

How has COVID changed the way that the university has done business and how will it have an everlasting impact going into the future?

I think one of the things that has been really helpful in terms of what we learned from our students is now we have a really good understanding of the mental health issues that students struggle with and other people that work here as well. And so that’s given us renewed interest around that and in some priority around some of that.

In terms of what we might continue … I think that there’s a lot of things that we’ve learned about technology. Faculty have learned new ways of teaching material I think that’s going to continue and that’s good.

We didn’t have a roadmap when the last pandemic was in 1918, 1919. But now we do, and we have documented that. StratComm has actually been documenting what we’ve done and how we’ve done it because there will be another pandemic, probably sooner than 100 years, or some other kind of infectious disease that will cause us to do something similar.

Are there any major changes that we should expect during your presidency?

I talked a little bit about us being a premier urban public research university, so I’m going to be focused on access and providing as much need-based aid to students as possible. Many students that come, many of them have some dollars available to cover some of their costs, but there’s this gap. A large number of students are Pell eligible students, so they are eligible for that Pell grant, and may be eligible for institutional aid and merit aid. But there’s still a gap, and that’s the focus that I’m going to be putting on and it’s going to be a priority across the institution.

The other thing related to that is to make sure that we have paid applied learning experiences for students … so they can use those dollars to help support their education. And the other thing is to really focus on our research. If we’re going to be a premier urban public research university we need to really shine in that area, and we have the ability to do that.

Back when the university first lifted the mask mandate they were still encouraging people to wear masks. Recently the CDC announced that fully vaccinated individuals don’t have to wear masks. What does this mean for campus— right now and in the fall?

What we’re doing right now is not requiring masks, but encouraging it if that’s what people feel comfortable doing. But what we’re really encouraging [people to do is] get a vaccine if you’re able to do that because if you do that, there’s virtually almost no risk if you’re fully vaccinated. I don’t see that changing for the fall.