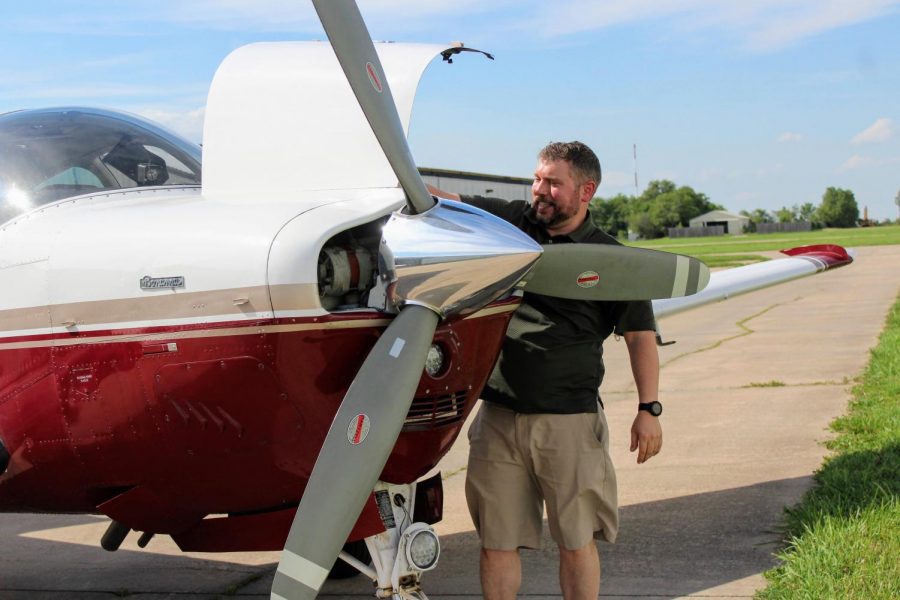 WSU alumnus John Goerzen took his first volunteering job in March as a pilot with Angel Flight – an organization that provides free medical transportation, for people that need non-emergency transport to medical appointments.

John Goerzen is a native Kansan with aviation in his blood.

The WSU alumnus takes to the skies as often as he can but it’s not all just for fun. He uses his personal plane, a Bonanza A36, to improve other’s lives – donating his flight time and personal funds to help make a difference in the lives of others.

Goerzen undertook his first volunteering job in March as a pilot with Angel Flight – an organization that provides free medical transportation, for people that need non-emergency transport to medical appointments.

Goerzen graduated in 2009 from WSU.

“I was a very non-traditional student,” he said. “I only did two and a half years of high school because I was taking so many Wichita State classes.”

Goerzen was on the fast track to a degree but put it on hold when he took a job outside of Wichita during his third year of schooling. When he returned to Wichita he completed the requirements for his degree in computer science.

Since then he’s made a career doing programming and systems administration.

Goerzen has worked for Fastly for about four years. Fastly is a company that provides hosting services for some of the largest websites on the internet.

He was the previous VP of IT and Engineering for eFolder, a cloud backup and disaster recovery company. Goerzen’s written books about programming and operating systems and he’s developed multiple programs as Free Software. He’s been a volunteer developer for the Debian GNU/Linux operating system since the late 1990s.

It’s clear that Goerzen loves connecting with people as much as he loves piloting. That’s what originally brought him to Angel Flight.

He said from the earliest days when he was pursuing a pilot’s license he wanted to find a way to use his air time to give back to others.

For his first trip as an Angel Flight pilot in March, Goerzen flew an elderly woman and her husband to Amarillo, TX after her treatment for advanced cancer at the University of Texas MD Anderson Cancer Center in Houston.

“That’s a long drive and she was quite frail,” he said.

Goerzen said the woman was clearly quite weak from the treatment. She had trouble getting into the aircraft and rode in the back. But her husband wanted to ride up front in the copilot seat. Goerzen helped him climb onto the wing and get in through the front door.

The man spoke to Goerzen about his memories of the different cities he’d lived in as they flew through the sky watching the sunset over Texas.

When they arrived at their destination Goerzen helped the woman out of the plane. There, the woman expressed to Goerzen just how much he helped her.

“It’s a good feeling to do something good,” Goerzen said. “It’s appreciated.”

While Goerzen loves doing what he does, there is a cost to this work. Goerzen doesn’t just donate his time but the wear and tear on his personal plane. The cost of fuel for these trips comes out of his own pocket.

“Since I flew all the way down to Abilene, Texas, and then to Amarillo, and then back here to Newton that was, you know, several hundred dollars,” Goerzen said.

Goerzen said the costs are not covered — they’re an additional part of volunteering.

There are a number of logistics that pilots doing outreach have to consider that the average person does not. He said that you cannot accept money for a flight, even if it’s just used to cover the cost of this philanthropy.

“Angel Flight regulations actually prohibit pilots from accepting any kind of money for the flight, which I wouldn’t anyway,” he said. “This isn’t about making money. This is about doing something for somebody else.”

Goerzen lives on an old farmstead near Goessel that once belonged to his grandparents. His wife Laura is a pastor at First Menonite Church of Christian in Moundridge. Together they’re raising three children, ages three, 11 and 14.

“I try to teach the kids that everybody has gifts, and everybody’s gifts are different. But there are people out there that are less fortunate than we are,” Goerzen said. “If we pay attention, we will find that there are ways that our gifts can be used to help others.”