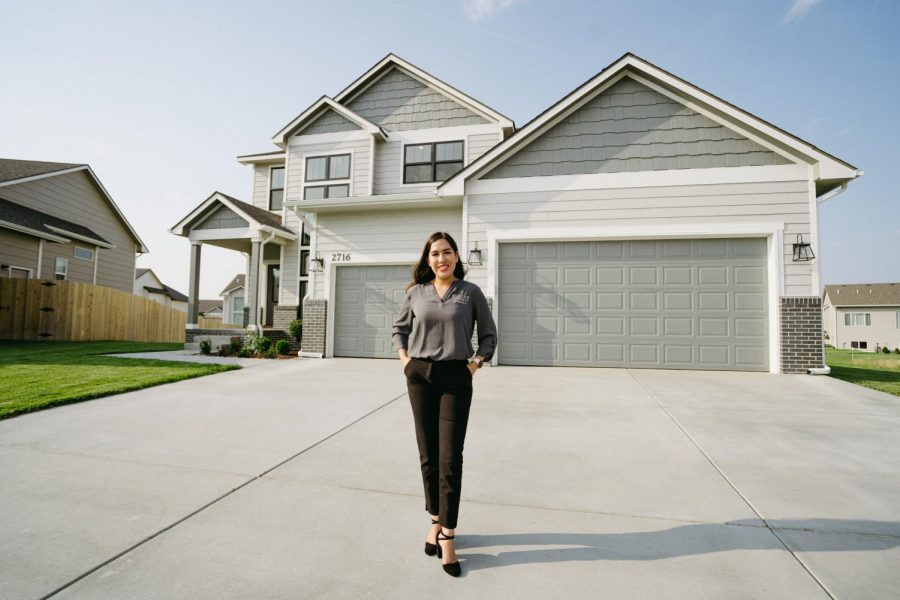 Wichita State senior Jennifer Castro poses in front of a listing from Miller Family Homes. Castro is a licensed real estate agent, and has been interning with the real estate firm since graduating high school.

Many college students spend the summer before their senior year trying to decide what they want to do after graduating. But 21-year-old Jennifer Castro launched her career while going to school.

Castro has been a licensed real estate agent for roughly a year.

“It all started when I was younger,” she said. “I would just watch the HGTV channel, and I was fascinated by the shows like Property Brothers and Love It or List It.

“My friends would come over, and they would be like ‘Jenny, what are you watching? Like, that’s for old people.”

Castro said she found it fascinating to watch property transformations on the HGTV shows.

“Seeing how the home turns from something that’s very outdated and that has a lot of damage to something that’s completely beautiful – that’s my first interest in real estate; that’s when it first caught my attention.”

Castro said she was looking for an internship around the time she graduated from Wichita East high school. One such opportunity became available at Miller Family Homes. Castro didn’t imagine that years later, she’d be employed there full time.

“First, I started off as an intern, and then I worked my way up to a leasing agent,” she said.

Gaining experience in leasing the company’s roughly 84 townhomes wasn’t just a resume builder but a stepping stone to her ongoing career.

“At one point, we had about 14 vacancies, and once I took over the position from the previous leasing agent, they were like, ‘Oh, you’re really good at this. Have you thought about getting your real estate license?’,” she said.

Castro said it was something she’d wanted to do for a while, but she had planned to wait until after graduation. Instead, she earned her real estate license last year at the encouragement of her employers.

Her primary focus is new home construction. She’s focused in a community in Park City where she’s selling homes from the upper $200,000 – the lower $300,000 price range.

While she said she enjoys the new home construction side of the business, she also hopes to get into investing in real estate eventually.

“And also flipping houses – that’s definitely another aspect that I want to get into,” she said. “That’s what I see myself doing in the next five to 10 years.”

But Castro isn’t all business all the time. She’s a member of the Kappa Delta Chi Sorority Incorporated. Earlier this year, she took part in the Miss Latina competition – hosted by the Hispanic American Leadership Organization (HALO) at Wichita State.

“It was a really awesome experience,” she said. “I felt like it was definitely something very out of my comfort zone, but it definitely gave me a chance to grow – to become more confident, and to put myself out there.”

Castro said the pageant is about more than just being pretty.

“It’s about helping out the Hispanic and Latino community, getting the word out, getting more awareness,” she said.

It’s also a scholarship pageant – the contestants can win scholarship money that helps them to afford school.

Castro said there are five categories they are judged upon. She took home multiple awards, including Miss HALO, Miss Photogenic, Miss Congeniality, Miss Cultura, and 1st Princess – that’s equivalent to second place in the most significant category for contestants.

Next year, Castro will co-chair the event instead of competing.

Castro is a first-generation college student and native Wichitan. She said she decided to go to WSU not only to be close to her family but in large part because of the internship she received with Miller Family Homes. She plans to remain in Wichita, working in the housing and real estate markets after she graduates, and she’s not wasting any time.

“This summer, I am working full time focusing more on my career and just trying to improve the most that I can and learn as much as I can to help me out in the future,” she said.