An inside look at SGA’s 64th session 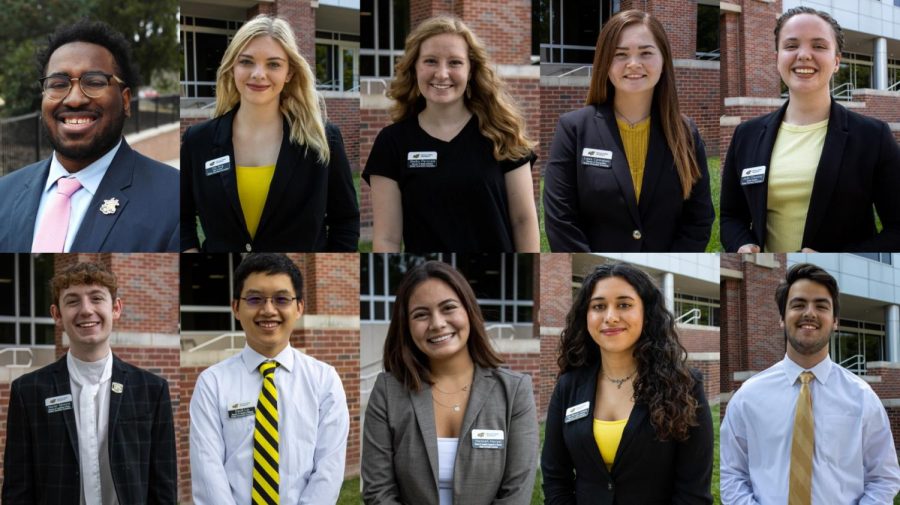 Student Body President Rija Khan’s cabinet is set for the 64th session of Student Government Association. Meet the students who will help lead the executive branch.

Zachary James is a senior double majoring in journalism and political science.  This is his second term in this position.

“When Rija told me she was going to run for president again she asked me if i wanted to be treasurer again with her and I was very, very happy,” James said.

The treasurer is responsible for allocating different scholarships, both individual and organization funding requests, and student fees.

Ella Ihrig is a senior studying Honors Baccalaureate.  This is Ihrig’s second year serving in SGA.

“I applied to this position after working with the Khan and Gumbs election campaign,” Ihrig said. “I knew the goals they had, and I wanted to be involved in making them a reality.”

Some of her responsibilities include overseeing projects that directors work on, keeping track of association records, and providing support to the president and vice president when needed.

Ihrig said that her past SGA experience, her experience working with other organizations on campus, and her passion for writing and working with legislation prepared her for this position.

Shelby Parscale is a junior majoring in communications with an emphasis in electronic media.  This is her first year holding a position on SGA.

Parscale said her responsibilities include producing creative content for SGA in order to help students better understand SGA as well as inform them about things going on within the organization.

“I accepted this position as I wanted to make a difference on campus while using what I love – videography and photography. I’m hoping to show students that SGA is not some scary organization and anyone can get involved! I also want them to feel comfortable with SGA and its missions,” Parscale said.

Parscale said that her experience in classes so far has taught her important information that has prepared her for this position on SGA.

Laura Cunningham is a junior double majoring in psychology and political science.  This is her first year holding a position on SGA as well as the first year for the position.

The director of sustainability is focused on sustainability concerns as well as trying to advance WSU’s green status at the university level.  She will often be working with the green group on campus to achieve these goals.

Cunningham said that she will be looking into the recycling program at WSU and encouraging students to use these services.  She also wants to look into solar panels and creating events that are long-lasting at the university.

Jadie Chauncey is a senior studying social work with a minor in political science. During the 63rd session, she served as director of policy development.

Chauncey works on academic, grade change, traffic, and parking appeals as well as the food for fines program.

“I know that this is a position that would’ve been really helpful for me coming in as a new student … I really love having the opportunity to be able to broaden the reach of this position and help students who don’t necessarily know how the university works, it’s something that I’m really passionate about,” Chauncey said.

Chauncey plans on working to get free legal services on campus, streamlining the appeals process, and expanding the reach of resources and helping students realize that they can come to her with questions and concerns and she will be able to point them in the right direction.  Being in social work classes and taking the information she has learned to create bigger change is what inspired her to take this role.

Hunter Minette is a sophomore double majoring in psychology and political science.  He was appointed as an At-Large senator before resigning to accept this position.

Minette said that a lot of his work is outside of the university doing government relations.  He assists the president with State Higher Education Day, does outreach with other legislative directors at other Kansas universities, and keeps up-to-date on higher education in Kansas.

Minette said that vice president Kamilah Gumbs reached out to him after working with her as a pro-temp for the diversity, empowerment and inclusion committee.  Getting practice writing minutes for the meetings and reading the by-laws for SGA and the student bill of rights has prepared Minette for this position.

“Ideally, I would love to have more collaboration with other student governments in Kansas … and have a closer working relationship with a lot of the other legislative directors,” Minette said.

David Liu is a junior studying nursing with minors in chemistry, psychology, and honors.  Liu previously held a position as the academic affairs chair.

Liu said that his major responsibilities include putting on wellness week and being a part of the health and wellness advisory board, which includes administrators at WSU.

“We meet and kinda say, ‘Hey, SGA is working on this, how will this impact students?’” Liu said.

Liu said that he wanted to continue to be involved with SGA and this role aligned more with his interests.  He plans on looking into student insurance to see how those costs can be brought down, utilizing pre-professional programs to provide cheaper medical services to students, and a needs assessment to see what students actually want and need.

Liu said that his experience in SGA has prepared him for this position, by teaching him how policy works and giving him experience working with other administrators and SGA members.

Hannah Harpel is a junior studying management information systems.  This is her second term in this position.

“My main focus is on student security, as you probably know the university is located in a food desert so one of my main goals is to combat that and come up with ways to help students, faculty and staff have access to resources,” Harpel said.

Another goal for Harpel is to build relationships with the surrounding community and get their input, especially with all of the development happening on campus.  Harpel also wants to make childcare more accessible and affordable for the WSU community.

Harpel said that even though this position doesn’t relate to her major, she enjoys helping people and how rewarding it is to see what she can do as a student leader.  Harpel said she feels like she has a good sense of direction in her second term of the position.

Itzia Barraza-Cordova is a junior studying political science.  She said that her position is responsible for making sure that people know what SGA stands behind and what their mission is.

She said if there was a crisis going on within the organization, she would be contacted to figure out what is going on and how SGA would respond.  If the president wants to make a statement, she would write up that statement for her.

“I want to help the student body familiarize themselves with SGA and feel comfortable coming to us with any problems that need to be fixed, or any other ideas they want to bring to campus, and helping people execute their ideas,” Barraza-Cordova said.

Barraza-Cordova said her experience in forensics in high school prepared her for this position.  Her internship working for a national association gave her experience with handling social media and putting out statements to the public.

Spencer Harris is a sophomore majoring in integrated marketing communications.  This is his first year holding a position on SGA as well as the first year for the position as well.

Harris said he was reached out to by a member about the position and was interested due to his social media work with different organizations in the past.  He said that the roles of this position aligned with a lot of his interests.

“Anyone running social media wants to increase engagement, so that’s one of my main goals … One of my goals and a lot of the communication team’s goal is to make it more understandable and reachable for people who aren’t directly involved with SGA,” Harris said.