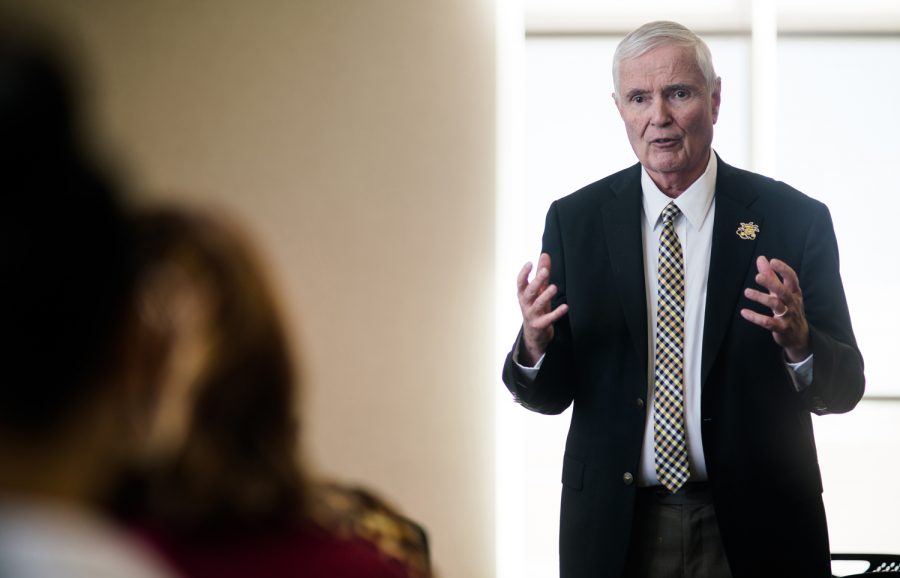 In response to uncertain state funding from year to year, Wichita State has tied faculty salaries to enrollment numbers. With the exception of rare, merit-based raises and promotions, faculty earnings have been stagnant since WSU President John Bardo’s first year, when he said he “used his honeymoon period” to increase the salaries of all faculty members to make the university more competitive at attracting talented professors.

The following year, departments were awarded a small percentage of their pool of money to award outstanding faculty within departments merit-based raises.

Since then, faculty wages have not increased, including last year when faculty members voiced frustration with not receiving an anticipated—and they say promised—2 percent pay increase.

This year’s Kansas Board of Regents tuition and fees proposal, which recommends a 5 percent tuition increase for the upcoming school year at WSU, says WSU is considering a 2 percent faculty salary increase in Spring 2017 if enrollment increases by 3.5 percent this fall compared to Fall 2015.

That means if enrollment doesn’t increase by 3.5 percent, faculty can expect to not receive an across-the-board raise to keep pace with cost of living and inflation for the third year in a row.

According to the Wichita State Strategic Enrollment Management Plan, total student headcount decreased from 15,003 students in 2014 to 14,495 in 2015. The plan forecasts student enrollment to increase by less than 1 percent this fall.

Here’s a look at some of those salaries, calculated by calendar year:

Kansas higher education will be cut by $30.7 million in fiscal year 2017, which begins July 1, 2016, according to the state budget signed by Gov. Sam Brownback in late May.

Wichita State will receive a 3.8 percent cut of $2.8 million for the upcoming school year.

In a message sent to faculty from Bardo concerning the FY 2017 budget, he instructed his vice presidents to reduce their budgets by 3 percent from 2016, and addressed the faculty concerning raises.

“As state funding diminishes, we all have strong roles to play in attracting and retaining students, seeking research funding and encouraging donor support. As enrollment increases in importance to overall budget, student credit hour growth becomes a driving factor in the availability of raises,” Bardo wrote.

“In short, let’s not waste any energy feeling sorry for ourselves,” he said.

Bardo directed faculty to look at an updated state budget FAQ at wichita.edu/statebudgetfaq, where he asks for money-saving ideas that will be shared with the appropriate individuals and departments to review the suggestions.

Bardo said the university’s initial response to the state’s funding include a freeze on non-required spending from general use funds and approval by the President’s Executive Team for contract spending above $5,000, non-faculty new hires, and university job searches and job postings.

“The three sources of funding we can affect are tuition/fees (by retaining and attracting more students); research and grants contracts; and donated funds. Faculty and staff can have a great impact in each of those areas,” Bardo said.

“It is our top priority to avoid furloughs or layoffs. I told the Unclassified Professional Staff meeting on April 14: “Everything we’re doing is to keep that (layoffs or furloughs) from happening. Let’s maintain our community . . . everything else is negotiable.”