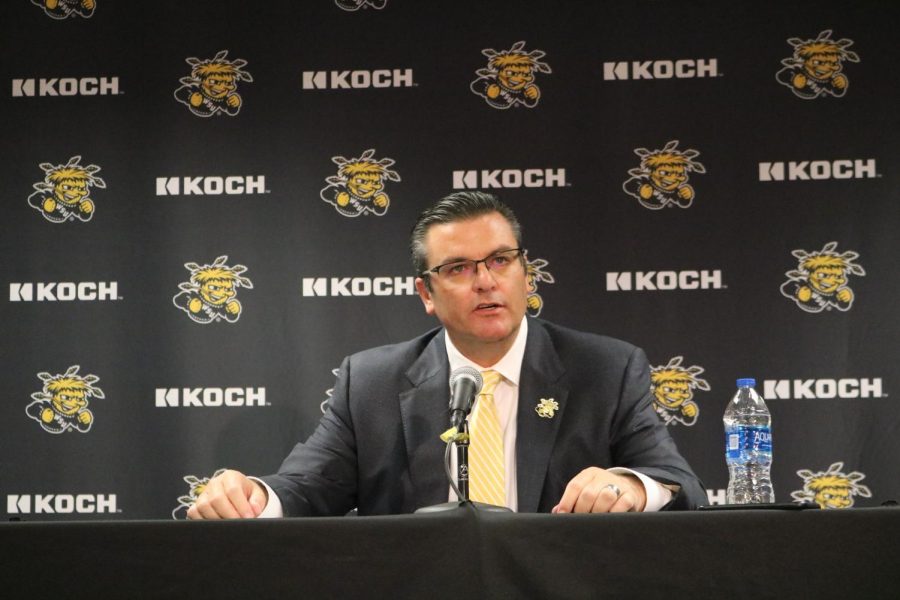 Darron Boatright explains the new NIL policy to the media at Charles Koch Arena on July 1. Boatright was promoted to athletic director in 2015 up until his firing on Wednesday.

For the first time in the history of college athletics, student-athletes were able to profit off their name, image, and likeness starting on Thursday.

Wichita State Athletic Director of Athletics Darron Boatright said they are supportive of their student-athletes beginning to profit through this new NIL policy, approved on Wednesday.

“It’s a new day in college athletics,” Boatright said. “Wichita State and the athletic department fully endorse and support our student athletes in their ability to profit off their name, image, and likeness. The university appreciates the urgency that all this is taking place and we realize that any of our policies and procedures are going to be fluid and we’ll continue to adjust over the next hours, days, weeks, months.”

The athletes will be able to profit off their NIL in some different avenues including endorsements and social media monetization.

Boatright was clear that this new introduction was not paying the athletes based on performance but rather the athletes earning money based on their brand.

“This is just your brand, your likeness, your name, things that you bring with you before you ever get to an institution,” Boatright said. “I believe that they should’ve been able to monetize that for some time now and I’m glad to see this day finally arrive.”

Since Kansas has not adopted any NIL regulations, WSU and other schools in the state are able to engage in NIL activities without violating NCAA rules. The NCAA has heavily limited those activities, which include having endorsement deals, leveraging social media for pay, and making money from coaching or signing autographs.

Boatright said he originally felt torn but ultimately feels it can have its advantages to not have a statewide law.

“I think we’re at a more advantageous situation as a state now because we didn’t pass anything,” Boatright said. “Each institution can implement policies and procedures themselves and also I’m sure there’s a time when each of the prospective conferences will weigh in so there is some consistency. I’m glad it’s not going to be completely from the university setting.”

Unlike some schools, WSU is allowing the athletes to orchestrate these deals by themselves.

Boatright said the only thing they are asking for is keep them informed.

“There will be hiccups, I’m sure there will be unintended consequences and we’ll figure those out as we go along,” Boatright said. “All we ask from our athletes is to let us know what you’re doing. We’ll help you where we can but just keep us informed on what you’re doing, no different than our staff members having to disclose outside business outside of their job-related business earning each year.”

As part of that process, WSU will not help arrange NIL opportunities for their athletes.

“We’re going to let them pursue them on their own,” Boatright said. “Based on what we know, that’s not an avenue that we want to travel down. Some may, but we’re going to be here to help them as they bring their opportunities and share them with us and help them do it the right way and hopefully avoid stepping in any potholes along the way.”

Boatright said that the athletes will be able to negotiate deals with boosters for the university but the deals must still be beneficial for the athletes.

The NCAA announced in its release that these payments can not be used as recruiting inticements.

“As long as they’re following the rules, we’re going to be as helpful and give as much support to a situation as possible,” Boatright said. “As long as it’s a legitimate business and business where they’re getting paid the same as people performing a similar task, then we’re not going to have a problem with it.”

Currently, WSU is unsure if they will allow the athletes to wear uniforms or Shocker gear in promotional material and Boatright said it will be determined at a later date.

Boatright said that due to the small nature of the athletic department, they have the chance to be more impactful with their athletics than at some bigger schools across the country.

“We have a small department and I think that’s going to allow us to work more hands on with more of our students,” Boatright said. “Where some of the larger institutions and athletic departments may not have that same relationship. I hope this allows us to be seen as a collaborative unit for our athletes.”