‘I can’t even describe it:’ Aaron Haase becomes the first Shocker to be drafted in the Eric Wedge Era 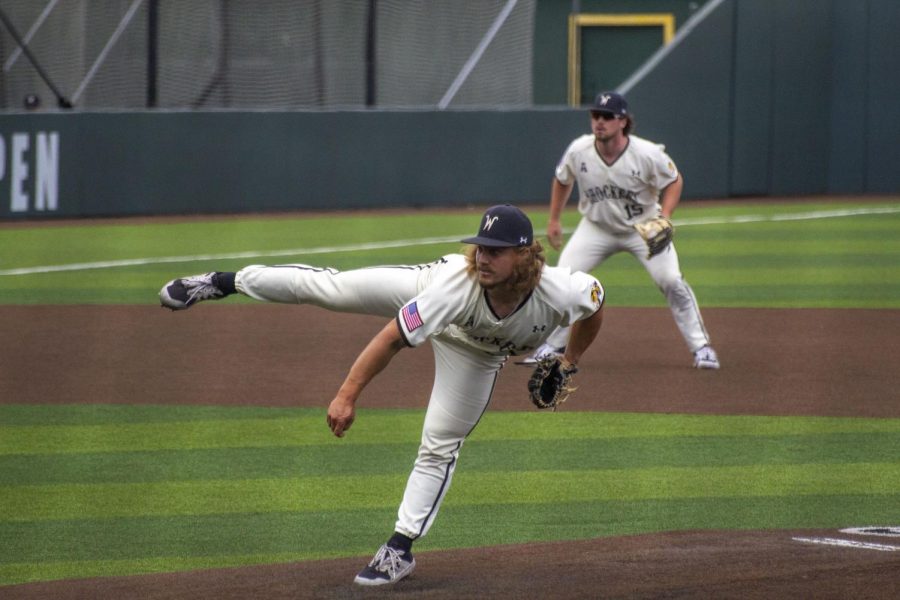 Junior Aaron Haase throws a pitch during Wichita State's game against East Carolina on May 9 inside Eck Stadium.

Wichita State sophomore pitcher Aaron Haase was drafted by the Detroit Tigers in the 17th round of the 2021 MLB Draft on Tuesday. The sophomore closer was drafted No. 495 overall on the third day of the draft.

Haase is also the first player to be drafted under head coach Eric Wedge and the 17th player from WSU to be drafted by the Tigers.

“It was really exciting,” Haase said. “I was lucky to be home for it with my family when it happened. It’s just an exciting thing, something that you dream about when you start playing. I’m not sure it’s totally set in yet.”

Haase said that his work with pitching coach Mike Pelfrey on the mental side of pitching paid dividends for him this season.

“It was a lot of mental growth and having Mike Pelfrey on the coaching staff to learn from was huge,” Haase said. “He’s so good with the mental side of the game and having him to learn from really took it to the next level.”

In Haase’s first two seasons with WSU, he struggled out of the bullpen, with his best season coming in 2019 with a 4.68 ERA. Haase then responded with a stellar 2021 campaign, while even taking on the closer role.

Haase said that his work both physically and mentally over the past year were critical in him getting selected by the Tigers.

“I think it helped a ton because I had some physical development moving into the last year as well as mental development and working with Pelfrey,” Haase said. “I think I grew a lot this past spring.”

As the first player drafted under Eric Wedge, Haase said that the pro mentality that Wedge instilled played a big part in him getting drafted.

“I think it helped a lot,” Haase said. “They know what it looks like, they have plenty of experience in the major leagues so just being able to learn from them was awesome.”

Haase was the lone Shocker drafted this year and is the first since 2019. No WSU players were selected in the abbreviated 2020 Draft.

The Amarillo, Texas native if everything goes as planned he will be signing with the Tigers.

“It’s awesome. I can’t even describe it,” Haase said. “I’m ecstatic to be able to play baseball for a living. It’s something you dream about as long as you’re playing. I’m really excited to be able to do it.”

With Haase’s WSU most likely coming to the end, he said that his fondest memories came from the close relationships he formed with his teammates.

“It was such a great group of guys to be around everyday and you’re around them a lot. I was lucky to have the group of guys that we did in the locker room.”