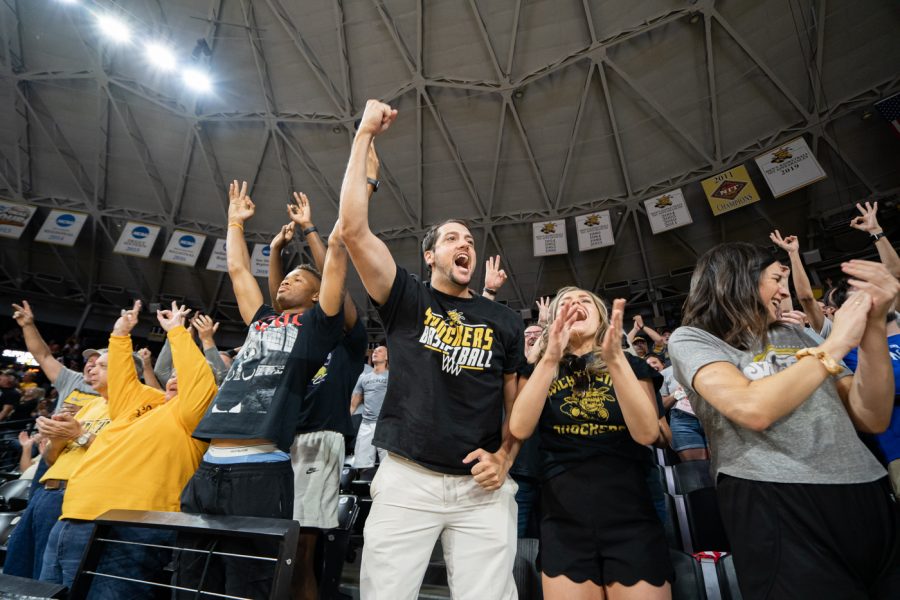 Fans go wild during the Aftershocks' game against the Ex-Pats during the TBT on Friday, July 16.

After a long wait, this past Friday was the first time Charles Koch Arena was allowed to be at full capacity since March 2019 with Wichita becoming a host site for The Basketball Tournament. Almost 8,000 fans filled in for the first two games to watch the Aftershocks, a team composed of the fanbase’s favorite Shockers.

Fans were excited to watch former Shocker players like Conner Frankamp, Rashard Kelly, Zach Brown, and Samajae Haynes-Jones make their returns to Wichita for the TBTthis past weekend. On Friday night’s game against the Ex-Pats, a few fans were excited to get an opportunity to watch some of their favorite former players for the first time in a while.

Shocker basketball fan Carol Cummings was excited to be able to come watch the Aftershocks  play after being a season ticket holder for several years. She said she saw former player Conner Frankamp right before the game which pushed her eagerness to watch even more so.

“My husband and I started in 1985 in the top row,” Cummings said. “Frankamp was standing right here just a little bit ago… hey good to see you again! By the time my husband got sick and couldn’t come anymore we were down the second row from the floor. We had season tickets all those years.”

“Well, I started buying tickets about 27 years ago, Conley said. “One of my favorite players came back to coach Randy Smithson and I’ve just been here ever since. We missed the first three or four ball games last year here, but we did get to come to the rest of them. Every year we’ve traveled to watch the team play in other places, so last year was really bad.”

Former Shocker players got to experience a similar feeling to what it was like when they played in the Roundhouse several years ago. Kelly said towards the end of the game on Friday night having the crowd on your side was an advantage to help them win their first round game in the tournament.

“I say it’s a big boost, ” Kelly said. “Think about it, crunch time, end of the game, you got the crowd on your side, everybody is booing the refs.”

Sunday night pushed the competitive spirit of Shockers fans even more so due to the AfterShocks facing the Omaha Blue Crew. The Blue Crew is made up of former Creighton University alumni players. Creighton was a rival for the Shockers in the Missouri Valley Conference. The last time the two programs competed against one another was in 2011.

“It’s been awesome and the last time the Aftershocks played was when it got loud in there… oh it brought back memories and it was wonderful,” Hepburn said.