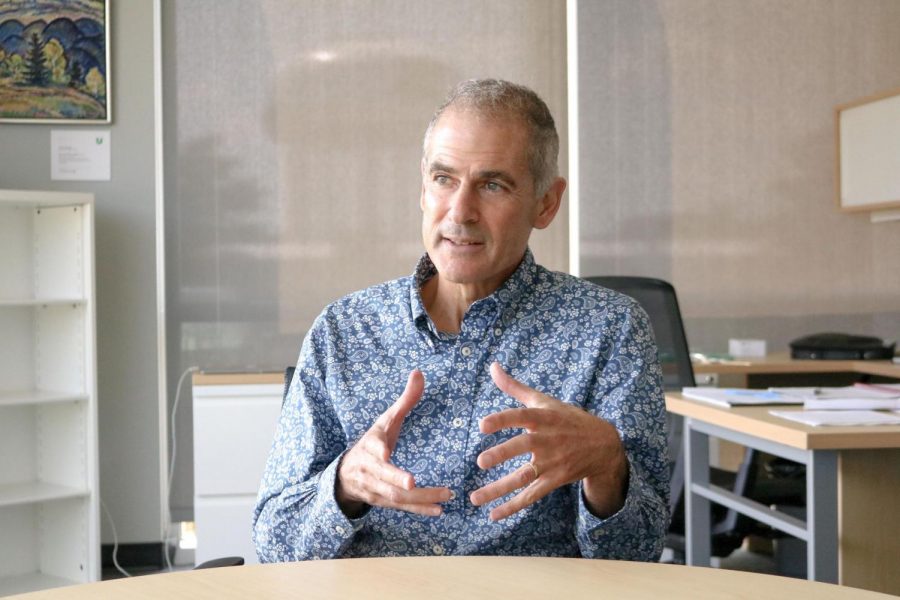 Dr. Anthony Muscat, the new College of Engineering Dean, describes his plans for the university as he settles into his new position at Wichita State on July 29.

The new College of Engineering Dean Dr. Anthony Muscat started his position barely a week ago, but is already eager to begin work at the university and connect with students.

“If I have any fear, that’s the one fear I have about this new position, is losing that connection to students,” Muscat said. “I don’t want to do it vicariously through the faculty and everyone else, but have direct interaction with students.”

Muscat was previously a chair for his department at the University of Arizona, which helped him learn how important it is to advocate on behalf of both students and faculty.  Muscat said that the energy of students is what got him into teaching and he doesn’t want to lose that.

Muscat said both the University of Arizona and WSU had a high population of first generation and low income students. He said that that inspired him to take the position at WSU.

“That’s another part that I find fulfilling, is being able to help somebody really change their economic status by going into engineering,” Muscat said.

Muscat said that the main attractor for him in this position is the hands-on learning and the depth of industrial engagement at WSU.

“A lot of universities say that they do hands-on learning, but I think here at WSU, you do it in such a great way for the students,” Muscat said. “It not only has some depth, but I think it sets a student up for their entire career, some of the hands-on learning experiences that I have seen.”

Muscat has already started working with students in the College of Engineering on helping them determine what makes them come to work everyday and what really makes them do a good job.

“My leadership style is hands-on,” he said. “I am really interested in trying to understand where the person is, what their career goals are, and seeing how what they’re passionate about overlaps with our mission … What I would love to do is be able to have each of the people working with me to define some projects that they would like to work on.”

Muscat said his goals include working with students and finding more ways for first generation and low income students to be successful.  He also wants to increase the amount of research done at the university that focuses on societal problems.

“There are a lot of societal problems that really need an engineer’s know-how and I would like to see some of our faculty tackle some of those really big challenges,” Muscat said. “The other piece is trying to educate engineers who aren’t only technically strong but also appreciate the societal part.

Muscat said he has a tendency to jump in and change things quickly, but plans on learning more about the university, students, and staff before he starts to make any changes.