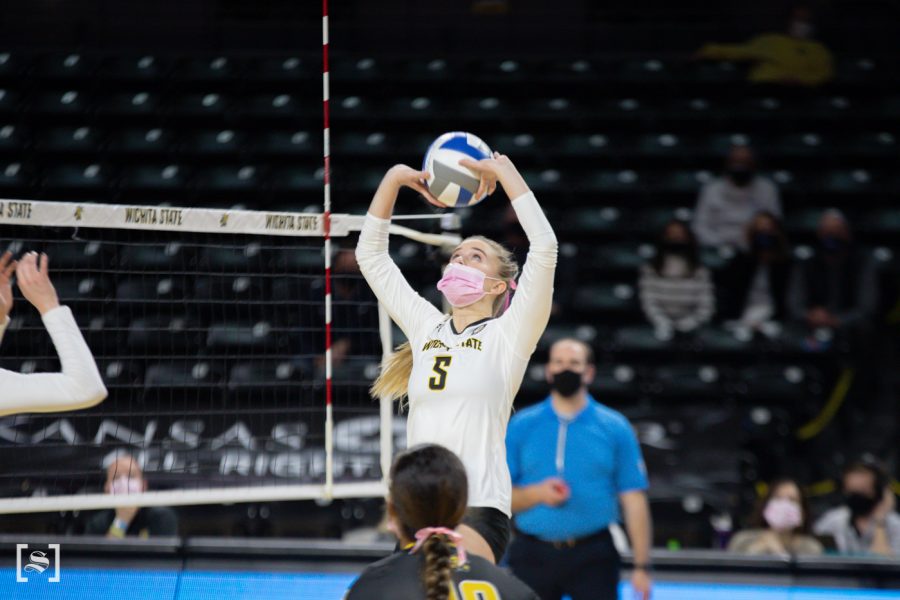 Wichita State sophomore Kayce Litzau sets the ball during the game against SMU at Charles Koch Arena on Feb. 27.

After a challenging year for college athletics, things are starting to return to normalcy heading into the 2021-22 school year. Last year’s sports season was filled with much uncertainty due to the pandemic. Unlike last year, Wichita State is slated to have fall sports on campus this fall, after volleyball and cross country had their seasons postponed last year.

Wichita State Director of Athletics Darron Boatright said that he is hopeful that collegiate athletics will be able to return to normal for next season.

“We hope that things get back to what normal is,” Boatright said. “We’ve learned over the past 18 months or so that we can adapt and we can change in ways that we’ve never thought before and to change multiple times during the course of an academic year. We have to be prepared and monitor the situations as it happens and be ready to adapt.”

The athletic department and the American Athletic Conference have continually changed the COVID-19 testing procedures, since the pandemic came into full effect in March of 2020.

Boatright said at the moment the plan is for student athletes to still be tested throughout the season.

“Our conference will still have policies that dictate the amount of testing that both in-conference teams and programs as well for the non-conference games that we participate in,” Boatright said. “Right now, we’ll be at once a week within 48 hours of the contest.”

At the major league levels, some sports are relaxing their COVID protocols to teams that reach a certain benchmark of players that are vaccinated. The NCAA put that into effect last May during the College World Series, when North Carolina State was forced to forfeit its remaining games after reaching a certain threshold of positive tests.

Boatright said instead of postponements after high positive tests, there will be forfeits, similar to what happened with NC State.

“We can’t dictate or not to a college student whether or not they have to be vaccinated,” Boatright said. “We will just have to have rules in place where, as you saw in the College Baseball World Series, there’s a certain threshold that we all know going in. If your team tests positive to that threshold a forfeit will occur.”

“I think that’s the big difference that you’re going to see this year where ‘no contests’ were decided previously and I think those will turn into forfeitures this year.”

For the first time since March 2020, a full-capacity crowd was allowed in Charles Koch Arena this summer during The Basketball Tournament. Charles Koch Arena recorded the second-largest crowd (6,510) in TBT history — second only to the AfterShocks’ debut game at Koch Arena in 2019 (7,154).

Boatright said the expectation at the moment is for no restrictions for fan attendance this season.

“That’s something that we’ll have to monitor as well as local, county and state health regulations and be ready to communicate that to our fan base what those restrictions may be,” Boatright said. “Right now, there are no restrictions.”

Boatright said that the increased fan attendance this year will make up for some of the lost revenue last year.

“Tremendously. Not only is it ticket sales but its concessions, apparel, pride which leads to donations, getting prospective students on our campus. When we put on an event it showcases the entire university and the changes that we’ve been through over the past several years, a lot of folks see those as a result of athletic events.”

The athletic department formed the Shocker Pride Fund, due to a loss of fan revenue last year which helped offset some of those losses. The fund allowed fans and boosters to donate to Shocker athletics to help them offset those costs.

Boatright said that this was key in helping them stay afloat during a trying year, financially.

“It was impactful and that’s not something that we can do routinely,” Boatright said. “We were able to survive this past year. I think our department has done a good job over the years initially when we had made some money by putting it into a reserve. That was pretty much depleted as a result of last year. We were able to survive it once but I’m not sure that’s anything that we’re trying to do moving forward.”

Boatright said that his biggest takeaway from last season’s challenges was the trust that developed within the department.

“It was a lot,” Boatright said. “You just learn to rely on and trust people to conduct their roles and you realize the professionalism that they have. There’s so many changes and adaptations going on that once person such as an athletic director can’t monitor everything. You have trust that people are good at their position and are capable and let them do it.”

Despite all outside distractions that the athletes dealt with last year, WSU turned in one of its best seasons in recent years, with three different teams making it to the NCAA Tournament.

Boatright said it was impressive to see that amount of success with all the outside distractions.

“To say it was expected would be misleading,” Boatright said. “We had a great year athletically and competitively and even academically. I’m very proud of our programs and our students that were able to eliminate distractions and when it came gametime to focus in on the task at hand and have a lot of success.”