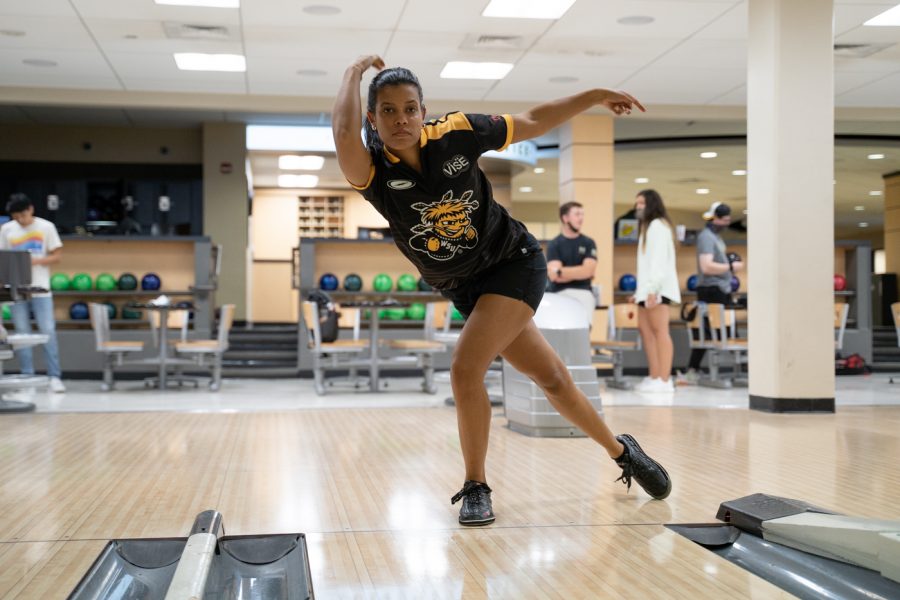 Wichita State senior Madison Janack bowls inside the Rhatigan Student Center on Monday, Aug. 17. Janack is coming off a successful junior season where she won the Most Valuable Player and helped lead the Shockers to a National Championship.

The sport of bowling has always been in Madison Janack’s blood. Janack, a senior member of the Wichita State bowling team, grew up around the sport and said that she felt it was her destiny.

“My family was a whole bunch of bowlers so it was kind of just destined for me,” Janack said. “The success that I’ve had is something indescribable and I give it to my parents for all support.”

Even with her family’s connection, Janack considers herself a late bloomer. She first picked up a bowling ball when she was nine at a birthday party. That sparked some interest for Janack and she entered competitive tournaments soon after that. Janack went on to become a nine-time champion and was a member of Jr. Team USA in 2018.

It was an easy decision for Janack to join the team.

“Wichita State is the best bowling program in the world and I want to be the best of the best in the future and I thought I’d have the most success here,” she said.

Janack’s success carried over to WSU early on in her career. In her first ever tournament, she collected a fourth place finish and finished off her freshman year with two more top-10 finishes. In Janack’s sophomore season, she ended with two Top-five, two top-10, and three top-25 placements.

Some adversity hit during the end of Janack’s sophomore season was canceled due to COVID, the program faced more setbacks the following season. The bowling season was delayed to the spring and practices limited to groups which Janack said was difficult.

“Last year was undeniably the most stressful year with COVID and it kind of just fueled a fire for me,” Janack said. “I just thought in my mind, ‘what do I have to lose, I should just go all out right now’.”

Fueled by that motivation, Janack put together her best year yet during the 2021 season. Janack earned the National Collegiate Bowling Coaches Association Most Valuable Player, after placing in the top-25 in every tournament, including a first-place finish at the Mid-States Championships.

“It was really special just watching her just be great,” women’s head bowling coach Holly Harris said. “The first two years she was here, she was still great but it felt like everything clicked last year. She was free to play and free to be great and it was fun to watch that happen and to know that it wasn’t happening for herself, she wanted it so bad for her teammates.”

Harris said that Janack isn’t fully aware of last year’s accomplishments because of how important the team results were for her.

Harris said that Janack’s work ethic has stood out to her, ever since she stepped on campus.

“I haven’t seen anyone work harder than her,” Harris said. “She’s in here all the time, the last two summers she’s been here the whole time practicing. She loves to learn and she loves the process of getting better. It’s fun to watch her get to do that.”

Janack said that her career to this point at WSU has been special, well beyond her bowling career here.

“I don’t think words can be formed on how it is here,” Janack said. “My past three years have been indescribable with the friends I’ve made on the team, the coaches’ relationship, and how they support me during my collegiate years and in the future as well.”

As Janack heads into her last season at WSU, she said her goal is to repeat as national champions.