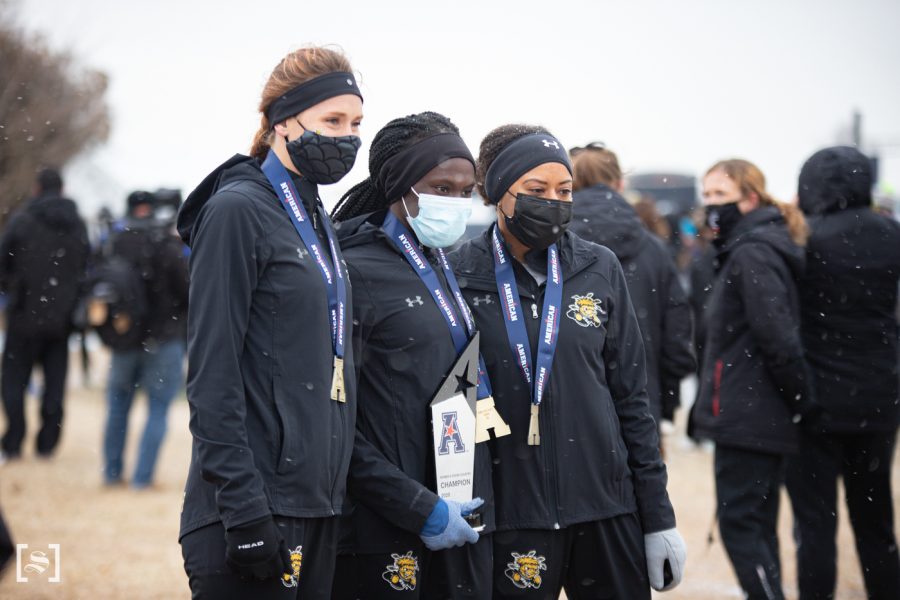 The women’s team lost top runner Winny Koskei to graduation. Koskei is a three time conference champion for the Shockers
in the 6K. Wright finished fifth last year in the AAC. Wright said she would personally like to finish higher in conference than she did last year and make all-region due to the opportunity to get to run in a regional meet this season.

Head Coach Kirk Hunter said that losing runners like Koskei will be hard for the women to overcome, but a championship in conference is still possible.

“We were losing people left and right in terms of graduation so the young people really have to step
it up, and in this league it’s going to be really tough to you know get up to that level but last year they didn’t think our girls could get second and they did,” Hunter said.“I like the fact that the girls like to prove people wrong and hopefully they’ll do it again this year.”

The women’s team has finished second place as a team at conference the past two seasons.

“So we’ve gotten top two the past two years and I think everyone would definitely like to work for a first place finish,” Wright said. “So far I feel like the chemistry has been really good and I feel like we’ll work well together.”

On the men’s side, Helker finished 14th overall last season in the conference champiosnhips. He said his goal is to place in the top five or ten in the AAC. As a team, Helker said the men hope to have more runners finish towards the top 15, and second overall as a team. The men finished fourth as a team in the conference last season.

“With our team I think it was kind of a winter cross country season last year so having a little more of a build up and training process we will be a lot more fit,” Helker said. “If we could get top three that would be great, shooting for runner up or if we could upset Tulsa that would be great because they’re ranked top 10 in the nation.”

Hunter said both teams haven’t had a lot of workouts yet but that runners from both sides have started to stand out.

“The one workout we did and that doesn’t tell us a lot about the season; have to say Yazmine defi- nitely stood out on the women,” Hunter said.”She came back incredibly fit. Jed Helker, Adam Moore, and Shadrack Chumba were really good also.”

However, not everyone is back yet so Hunter said it is still too soon to tell where everyone is at.

“The fact is we haven’t got everybody together yet so we don’t know 100% where everybody stands but I was excited to see how they came back from the summer,”

Hunter said. “Those upperclassmen and then were really excited about all of our freshmen. Men and women. They are going to be big contributors for our team.”

The men and women will start their season out with the JK Gold Classic in Augusta, KS on Saturday, Sept 4 at 8:30 a.m.