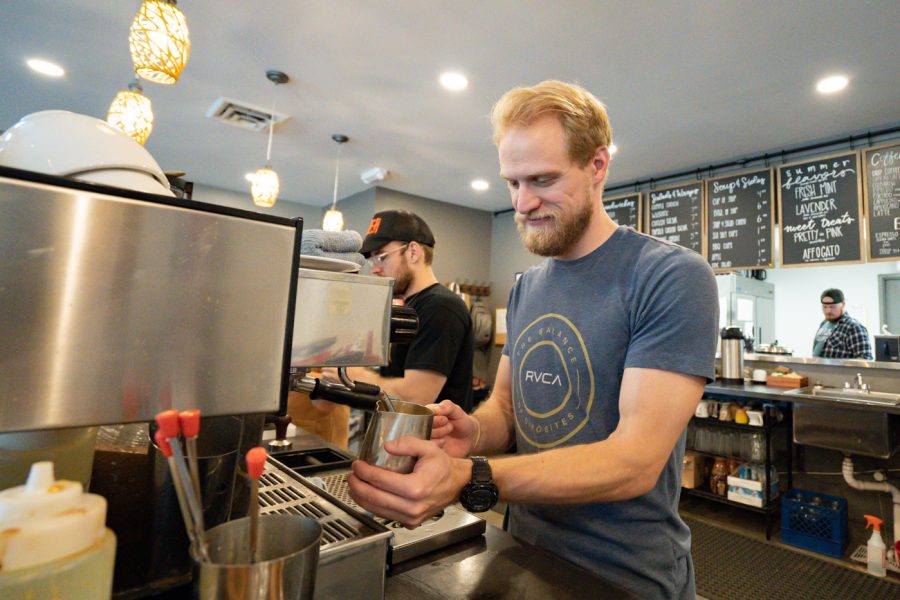 Various conversations around the coffee shop have turned into distant, background chatter as Lucas Lash mixes honey and cinnamon into a latte for a customer.

Fairmount Coffee, located on seventeenth street just across from campus, is a common hang out and study spot for Wichita State students. The welcoming atmosphere and coffee scent is a nice getaway from the busy Rhatigan Student Center.

Lash is the assistant manager. He enjoys working with coffee, playing the drums, and appreciates the arts. His main focus, however, is his faith.

“God is a huge part of my life. So I try to, I don’t know, pretty much every, everything that I do kind of flows from my relationship with God,” Lash said. “I got really connected at that church and that’s actually where I started playing drums, and getting involved at church and learning more about God.”

After graduating in 2012, he attended Butler Community College on and off. Lash is now celebrating two years at Fairmount Coffee.

Lash worked with a non-demonation church— Pathway Church.  He participated in musical worship as the drum player.

Luckily, the church still reached out to the community and found ways to virtually practice during a time where COVID-19 cases peaked. From videos to miscellaneous tasks, the youth programs were able to connect with weekly videos.

However, Lash eventually left Pathway and searched for a new location to connect with the community, God, and a great place to work. He felt that wasn’t the church he “was supposed to be a part of.”

After a short time of exploring the area for a new house of worship, he was invited to try a new church a short drive from his job and home.

“I got invited from a friend, because he was going to go there for the first time and he just asked me if I wanted to go and I said ‘sure, let’s go,’” Lash said. “We started going and we both really enjoyed it … it’s not really a big, big production type deal, which I enjoy. So it’s been good, it’s nice and small and I know the people they’re super nice, so it’s been good. I just really like closeness and community.”

A year and a half since COVID-19 swept the world, Lash said it affected him and his faith. But altogether, he became a stronger person because of it.

“[COVID] pushed me more towards being independent with God, which has been good,” Lash said.

In rough and hard times, he often thinks of the story of Peter walking on water with Jesus. The specific chapter from the Bible reminds Lash to keep trekking through.

“It’s popular, I guess, but it’s the story where Peter walks on the water,” Lash said. “He wasn’t worried about the storm and the waves around him…that was what was able to get him to get through that storm…It’s just that reliance and dependence on God.”

Lash said that working at Fairmount has helped him meet a lot of people he otherwise wouldn’t have— Like his co-workers, friends, pastors in the area, and even Wichita State University students.

At 27 years-old, Lash says for students of all ages to “seek the truth and to do it with an open mind and open heart, really just look at everything, and don’t base your decision on what you feel, or what you want.” to be true.”