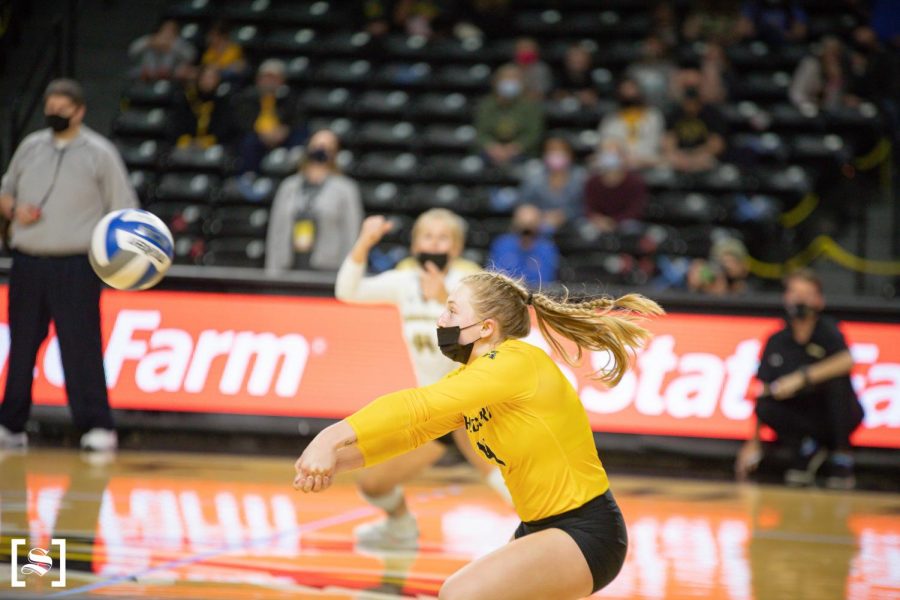 The Wichita State volleyball team opened up its season this weekend, competing in the A-State Invitational in Jonesboro, Arkansas. The Shockers finished the season-opening tournament with a 3-0 record across the two days.

The Shockers collected a sweep of Missouri State (25-22, 26-24, 25-16) in its season-opener on Friday. Sophomore Brylee Kelly led the way offensively, with a career-high 16 kills in the match. She committed just two errors and hit .500 in the match.

Sophomore libero Lily Liekweg led the way for the Shockers defensively with 16 digs. WSU outhit the Bears .257 to .192 in the victory.

The Shockers won its fifth straight season-opener, while also improving to 15-7 in season-openers under Chris Lamb.

The Shockers collected their second sweep on Friday evening, defeating the Nighthawks in three sets, 25-16, 25-15, 25-22. Brylee Kelly once again led the charge offensively, tallying 12 kills with no hitting errors. Kelly also hit .400 for the match.

The Wichita State volleyball team rallied from a 2-1 to defeat host Arkansas State in five sets (17-25, 25-19, 19-25, 25-18, 15-8) during the final match of the A-State Invite. The fifth set was tied at 8-8 but WSU finished the match on a 7-0 run to stay unbeaten after one weekend of play. Natalie Foster was pivotal down the stretch tallying a solo block and two kills, including the game-winner.

Kailin Newsome posted her first double-double as a Shocker with 17 kills and 10 digs. Sophia Rohling and Brylee Kelly each reach double figures for WSU, adding 13 and 10 kills, respectively.

The Shockers take the A-State Invitational finale over Arkansas State with a 7-0 run to close out the fifth set.

Lily Liekweg tallied a team-high 17 digs, while sophomore setter Kayce Litzau made her season debut in the second set and finished with 40 assists and 13 digs. Lauren Phillips played in three of the five sets and tallied eight assists and six digs.

WSU returns to action Sep. 3-4, at the SDSU Invite in Brookings, S.D. The Shockers open Friday against California Baptist (1 p.m.) and Montana (5 p.m.) then take on host South Dakota State at 1 p.m. on Saturday.

Liekweg was awarded the MVP for the tournament, after tallying 57 digs throughout the three games. Newsome and Kelly led the way for the Shockers offensively throughout the weekend, combing for 74 kills.

WSU returns to action Sep. 3-4, at the SDSU Invite in Brookings, S.D.

The Shockers will play two games on Friday against California Baptist (1 p.m.) and Montana (5 p.m.) then take on host South Dakota State at 1 p.m. on Saturday.