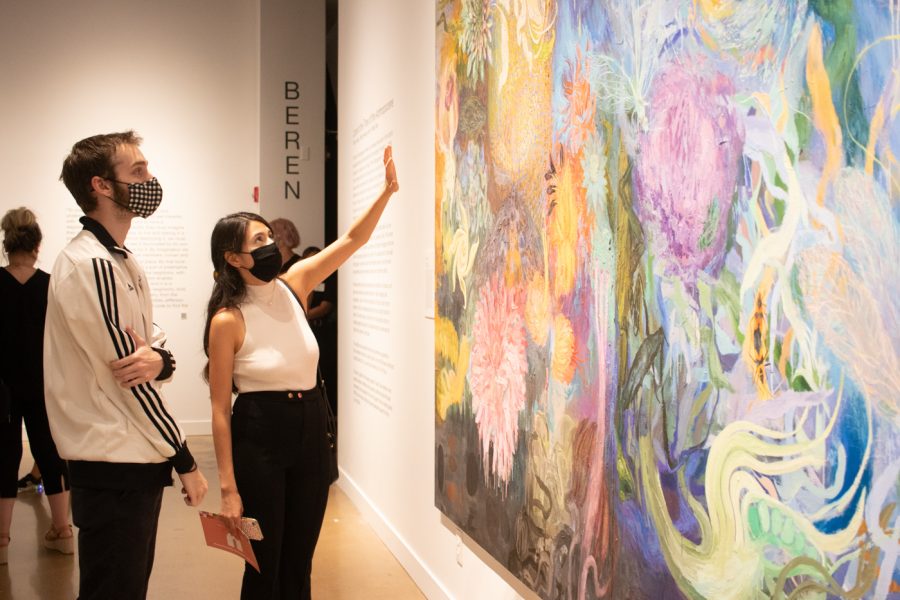 Guests view the complex mural of A. Mary Kay at the Ulrich's fall exhibit opening Aug. 26.

The exhibits— “Love in the Time of the Anthropocene” and “Look, it’s daybreak, dear, time to sing”— were a vivid display of paintings and photographs of the Kansas prairie. The central theme described how humans have become the most powerful force, and how a relationship symbiotic with nature should be our guide.

Climate change, greenhouse gases, rise of ocean levels, habitat loss, and species extinction are the concerns of the current world.

Mary Kay, painter of the “Love in the Time of the Anthropocene” described how painting has given her the ability to express what she can’t say with words. She said that we have lost contact with the natural world, abusing it, which disconnects us from wildlife and nature.

She described her painting as having “the fullness of the day,” an “orgasmic natural scene, that points to the vitality of life.” That ultimately when we die our lives will be swallowed by eternity, so it is important to form symbiotic relationships with the natural world.

Students seemed to be in awe of all that was being portrayed. A connection between the natural world, drawing to a bigger picture of human life and its impact on the environment.

Even though some of the students were required to come for classes, they described it as “an interesting illustration of agriculture.”

In “Look, it’s daybreak dear, time to sing” there were videos of the environment and how it is quickly changing. Showing how animals and humans interact and are very similar. Students described the videos displayed as “calming and reassuring.”

The new exhibits will be on display through Dec. 4 , with the museum being open from 11 am to 5 pm on Mondays-Saturdays.

EDITOR’S NOTE: A previous version of this story falsely stated that the exhibits were open through this month, the correct date is through Dec. 4. This version has also been edited to correct misspellings.