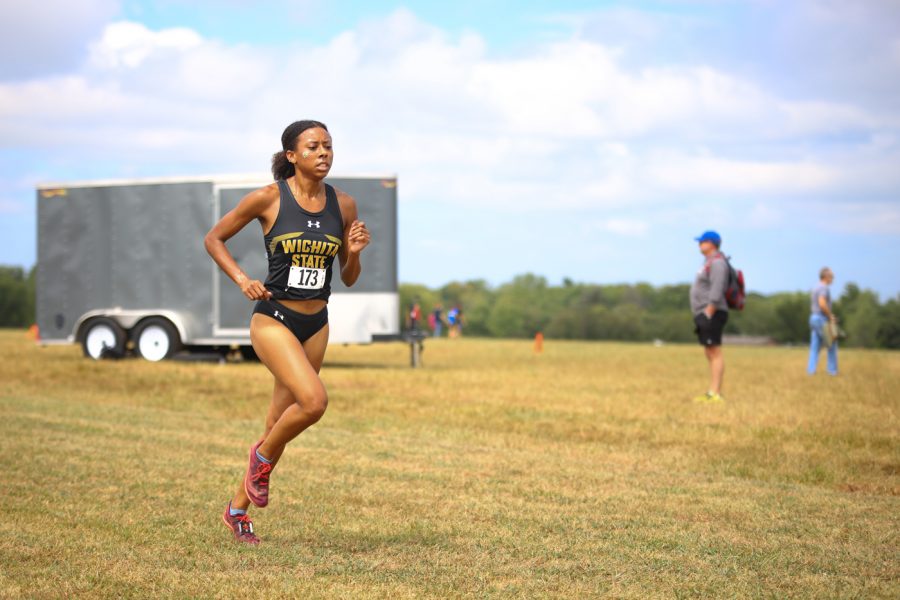 The Wichita State Cross Country program returned to action on Saturday, with its annual home meet, the JK Gold Classic. Both the men’s and women’s programs earned second place finishes in the meet.

In the women’s 5K race, the Shockers had four different athletes finish in the top-10– Yazmine Wright, Danielle Rinn, Lubna Suied, and Abeda Sullivan. Wright recorded her first ever Cross Country victory, finishing with a time of 17:34.10. Wright’s time was 39 seconds ahead of the second-place finisher in the race.

“It’s my first ever cross country win in college so that’s exciting,” Wright said. “I’m pumped to race some more.”

“Obviously, Yazmine was amazing,” Cross Country head coach Kirk Hunter said. “That was an amazing effort by herself out here to run that time. It was getting warmer then and she still managed to hold on and do that good of a race by herself. I don’t even know how to explain it.”

The Shockers had six different runners finish in the top-15 during the men’s 6K race, with four athletes placing in the top-10. Clayton Duchatschek had the highest finish for WSU, placing fifth with a personal record of 18:26.63.

“It was really nice,” Duchatschek said. “I got COVID during the summer and I wasn’t sure how the built back was going to be. I’m just happy these workouts are coming together for me, I’m feeling in better shape every week. It feels good to have a good start like that.”

Hunter said that the men’s aggressive racing out of the start proved costly as Colorado Christian took the team title by 15 points.

“I thought there was some aggressive racing off of some of them at the start of it but it didn’t paid off,” Hunter said. “They were aggressive enough where they weren’t able to hold it over the course of the race. I’m sure the guys are disappointed, they got it handed to us but I’m really glad Colorado Christan showed up and gave us a race like they did.”

Duchatschek said that the JK Gold can be impactful, especially for athletes who most recently ran track this past spring.

“I think it’s good because it’s not an 8K, which helps coming from track season where we’re running shorter distances most of the time,” Duchatschek said. “It’s just great work our way back to the longer stuff, we’ve got 8 or 10Ks the rest of the season. I just think it’s a good starting point for us.”

Hunter said that this meet can be helpful for athletes to earn a spot in the team.

“It’s great to have a home meet because it gives us the opportunity to run some unattached kids,” Hunter said. “Some of our girls and guys were not in uniform today, found out we’re going to put some in uniform because they ran so well. It’s great to start off here. They know the course, they know the atmosphere.”

The start of the meet was delayed by five hours due to substantial rainfall. The races were initally scheduled to start around 8:30 a.m. but were pushed back to 1:00 p.m. due to the weather condintions.

“We figured if it rained hard enough, it would just roll off the hills, and that’s what it did,” Hunter said. “This course holds water well. It’s solid. It’s good. It was a great place for everybody to race today.

The Shockers will next return to action on Sept. 18 with the Greeno/Dirksen Invitational in Lincoln, Nebraska.