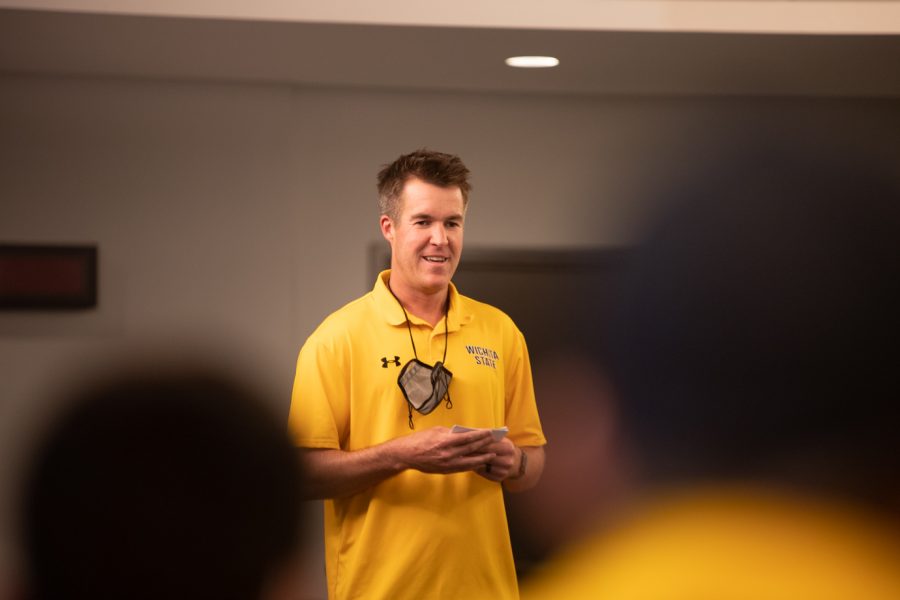 Head coach Danny Bryan talks to his team after the Division I Men's Tennis Championship selection announcements on May 3, 2021.

On Monday, July 19 Head Coach Danny Bryan announced the hire of Brett Froman as the Assistant Coach for the program. Before coming to Wichita State, Forman was an assistant coach at the University of Wisconsin. He was also a volunteer assistant for Princeton University and Michigan State.

Forman played his collegiate tennis career at MichiganState, where he was named Team MVP four times. He also had more than 100 victories in singles during his time there.

Forman said he has wanted to coach tennis since he ended his playing career at Michigan State. His competitive nature is what helped spark an interest in coaching.

“I also had when I was playing a lot of my coaches had a great impact on me,”Forman said. “Not just from a time standpoint but from a personal development standpoint so I want to be able to help do that for the kids coming up as well.”

Forman said Wichita State stood out to him in terms of start- ing a coaching career because of the strong presence that program has shown.

“There’s been a noticeable shift in the last couple of years since Danny’s come here and I thought it was a great opportunity for me to jump on the train and toot it, keep it going,” Forman said.

Bryan said he got in touch with Forman through mutual friend Billy Pate who is the head men’s tennis coach at Princeton. Pate recommended Forman to Bryant for the position.

“I also was impressed with in a short period in his coaching career he hasn’t had a lot of different experiences and has learned from a lot of coaches that I respect,” Bryan said. “I felt like that was going to benefit us moving forward.”

Barbieri played collegiately at William Woods and Bethany College. He was ranked No.1 in the nation while at Bethany and made it to the quarterfinals at the NAIA national tournament.

“I felt like I had to give back and of course once you’re off the court the only way to help other guys or mentor is coaching and by getting better,”Barbieri said. “I was looking for new challenges and new programs.”

Barbieri is originally from Argentina and after moving to Wichita, he started a job at Genesis Health Clubs. However, after noticing the high level the tennis program was at Wichita State, he wanted to give coaching another chance.

“Well since being from another country and now being here, Wichita State has been growing year after year and now that I moved here to Wichita the program has been top level and I wanted to see what continues there with my experience and a chance to help the program reach new high levels,” Barbieri said.

Barbieri said that he has noticed a change from the transition of player to coach.

Bryan said he heard about Barbieri for the coaching position from his doubles partner in college. Bryan’s doubles partner was the former head coach for the Missouri State Women’s tennis program.

“He wanted to stay in college tennis and you know basically with David we are just really fortunate to have him in that position,” Bryan said. “Sometimes we don’t find a quality candidate to fill that position so this year we are really lucky to have him.”