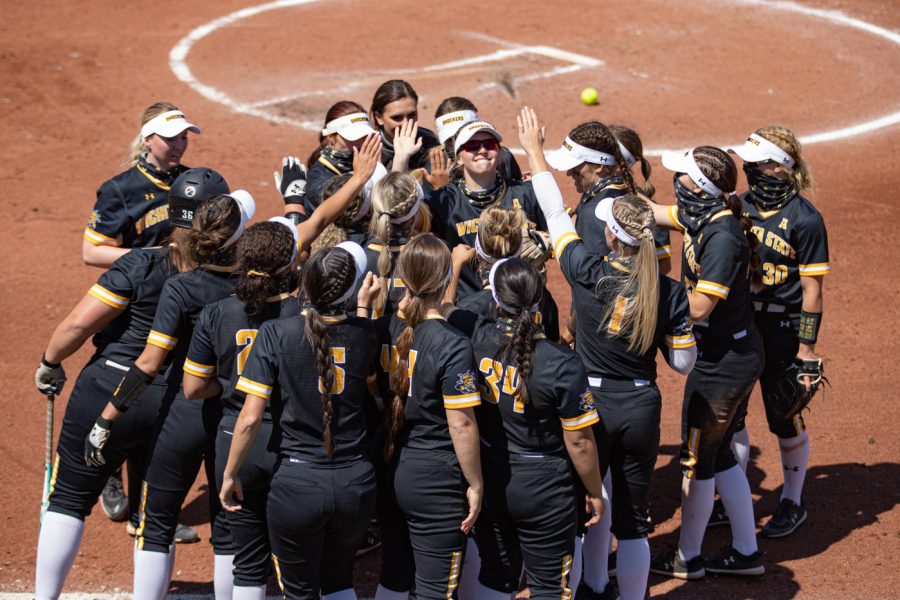 Wichita State freshman Bailey Urban celebrates with her teammates after hitting a homerun during the game against South Florida at Wilkins Stadium on April 24.

The Wichita State Softball Program will have a 2021 fall season of normalcy. Due to the circumstances of COVID -19 last season, the Shockers only had a few scrimmages. They will now play a schedule of eight games for the fall season, which will all be played at Wilkins Stadium.

Head Coach Kristi Bredbenner said that the program’s fall schedule will be helpful for incoming players, and returning players.

“It gives them, especially our new kids the opportunity to get some of those jitters out, see what the pace of the game is like, really kind of see where we are at as a team what we need to kind of do to get ourselves you know on the right path to being able to compete at that level,” Bredbenner said.

The Shockers have only done individual work in practice these past two weeks, but will be moving into full team practices soon. Bredbenner said that team practice will be a little more of an easier process this fall.

“I think that just feeling a little bit more back to normal and you know maybe understanding that most of our kids are vaccinated and were not necessarily having the issues that hopefully in the past with people having to quarantine things like that is a positive,” Bredbenner said.

The softball program lost six seniors, with five of those players consistently in the starting lineup. The seniors from last year also stood out because of their leadership on the field. Bredbenner mentioned a few players that have been stepping up into that leadership role.

“Sydney McKinney definitely stepped up quite a bit, Neleigh Herring, Caitlin Bingham, Erin McDonald [and] Wylie Glover,”Bredbenner said. “Are returners that are all juniors and seniors doing a great job of, you know, showing the girls the ropes, communicating with them, kind of keeping them accountable and really taking over a little bit for that group that graduated last year. There is always a year that you have to pass the torch to a pretty big group and I think they’ve done a great job of transitioning into great leaders.”

“Alison Cooper and Kenzie Schopfer, Jordan Pipkin who redshirted last year as another great option for us in the bullpen,” Bredbenner said “You know Krystin Nelson, Caroline Tallent they’re both coming in and working really hard. They’re both getting acclimated to the ways we do things, and the pace.”

A position in the lineup that will need to be replaced is  at catcher. This role was previously filled by Madison Perrigan who was named First Team All-Conference in the American Athletic Conference last season. Bredbenner said sophomores Jessica Garcia and Laniee Brown have both been competing for Perrigan’s former role.

Due to the fall season being an opportunity for the players in the program to grow individually and as a team, there is definitely competition and opportunity for other players to fill in a role in the starting lineup. However, with the 2022 regular spring season being several months away, Bredbenner said nothing is being decided yet.

“We try to create as much competition as possible and I think more than anything what were noticing early in the season is a definite desire to play,” Bredbenner said.”Maybe a little more nerves because there is some more competition and so we’ve kind of got to slow them down a little bit and make them realize the season is a long time away from now and that they just need to kind of relax, take it all in, do their best and continue to keep improving every day.”

The Shockers will begin their fall season at Wilkins Stadium on Sunday, Sept. 19 against Pittsburg State University.