Straying from his original plan, WSU alumnus comes back to WSU to teach violin 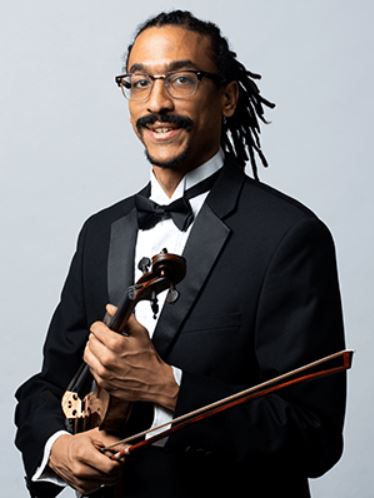 When attending school at a university you might feel like you’re just another number in a classroom.  Instead of a professor knowing your face and personality, they just see a room full of students as a part of their job. For music teacher Timothy Jones, he never wants this to be the case.

Jones said he enjoys the one-on-one time he has with his students and the bond that he gets to form with them.

“What I love about teaching is that you really get to help people,” Jones said. “I think that was always my inspiration for being an educator.”

A Wichita Native and WSU alumnus, Jones has had the passion for teaching since he was ten years old. His dream was to teach middle schoolers — but when the position opened at WSU, he said he couldn’t pass the opportunity.

“I really wanted to teach middle school, that was my dream for a long time, even through college my goal was to be a middle school teacher,” Jones said. “I really think that when you want something, truly and you’re committed to it, it’s very likely to happen. The question is how and when it will happen.”

Teaching middle school was a seed he had planted throughout school that was destined to bear fruit, but by the time he had finished his doctorate he had bigger plans to teach higher education. After teaching middle school for a year, he pursued an open position at the college.

“I was actually prepared to continue doing [teaching middle school], but it happened that the violin professor had resigned at that moment,” Jones said. “It just made sense, it was a natural decision to seek this position.”

If someone had told him 15 years ago that he would be teaching at the school where he received his first two degrees, he would have been a little shocked.

“I love being here, it’s really an honor and a joy to be in the place where I also earned my first two degrees, teaching in the studio where I once had lessons as a student,” Jones said. “It’s powerful and I’m really happy about it.”

After attending WSU, he went to Brazil to further his education and pursue his doctorate degree, looking for a chance to get away from home.

“I can’t even tell you how happy I was,” Jones said

Jones spent almost five years in Brazil where he met his husband.

Moving back to the states after Brazil served as a culture shock for Jones., He said he still misses the friendliness of the communities there.

“The people are so receptive, coming back to the states was almost more of a cultural shock than going to Brazil,” Jones said. “I think I was so ready at that moment in my mid-twenties, just so ready for just any type of new experience and then when I came back to the states, I was almost 30 … Brazilian’s are such warm people”

Jones said that teaching through COVID-19 offered a unique challenge for the music department.

“I was complicated for everyone, but the unique aspect for us is that we spend thousands of hours alone in a room with our instrument to eventually present something to the public,” Jones said. “Without that presentation, our work loses a lot of its meaning you know.”

Even throughout the uncertain and troubling times, Jones said that he certainly didn’t see his students unmotivated.

“I would not say unmotivated, I really wouldn’t, I saw the students working hard but it was difficult to practice and stay motivated without having some kind of public presentation to look forward to,” Jones said. “So this was a challenge, obviously we live-streamed concerts and recorded concerts, but not unlike sports, so much of the experience and the energy has to do with being seen.”

Jones said that with live concerts back this semester, he is excited to see the hard work of his students and put their talent on display.