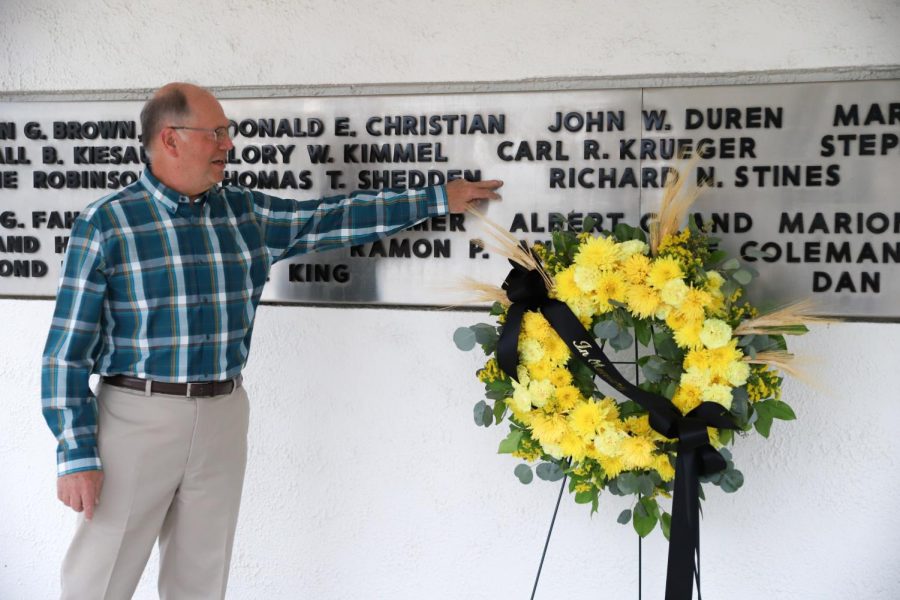 They come to remember and honor but the heavy and eerie feeling never really goes away for players and staff on the anniversary of the October 2, 1971 plane crash of the Wichita State University Football Team. Amongst them were saddened community members, family, and friends.

On Saturday, Oct. 2, Wichita State hosted a ceremony for the 51st anniversary of the plane crash at the Rhatigan Student Center. The event held several speakers including Wichita State President Richard Muma. The current Wichita State baseball team was also in attendance.

The day started off like any other day for members of the WSU football team. Two planes named the “Gold Plane” and  the “Black Plane” departed from the Denver airport, to head to Logan, Utah where they would play Utah State University. However, the gold plane never made it back home after crashing into Mount Trelease near Silver Plume, Colorado. The “Black Plane” landed safely in Logan, Utah.

Former Wichita State football player Allen Young said the memorial anniversary is significant to him and other players because it brings them all together. He said the football program went 40 years before losing their first teammate from the 70’s.

“We’ve lost brothers and sisters, aunts, and uncles,” Young said. “When you’re 17, 18 years old and you go through a tragedy like this it stays with you forever. I think the early years after and since we went our own ways we might not be able to forget but as you grow older you grow closer together now because we are family.”

The program lost 31 people in the plane crash.  Among those who lost their lives that day were 14 players, 14 staff and boosters, and three crew members. Among the passengers in the plane, only nine of them survived the crash. Eight of them were players and one of them was the co-pilot.

Several players from “the Black Plane” were in attendance at the ceremony. One of them was Bill Glasco. Glasco is from Independence, Missouri and said he did not consider himself to be a great football player but that he was a great student and WSU gave him a scholarship to play football. He graduated Wichita State with a math degree.

He said he lost many of his best friends in the crash, and felt fortunate to have been on the “black plane” but was deeply saddened to experience loss at a young age.

The Shockers continued their season which was known as “the second season” on Saturday, Oct. 24 against the University of Arkansas at War Memorial Stadium. The plane crash memorial can be found at 18th and Hillside on the Wichita State campus.