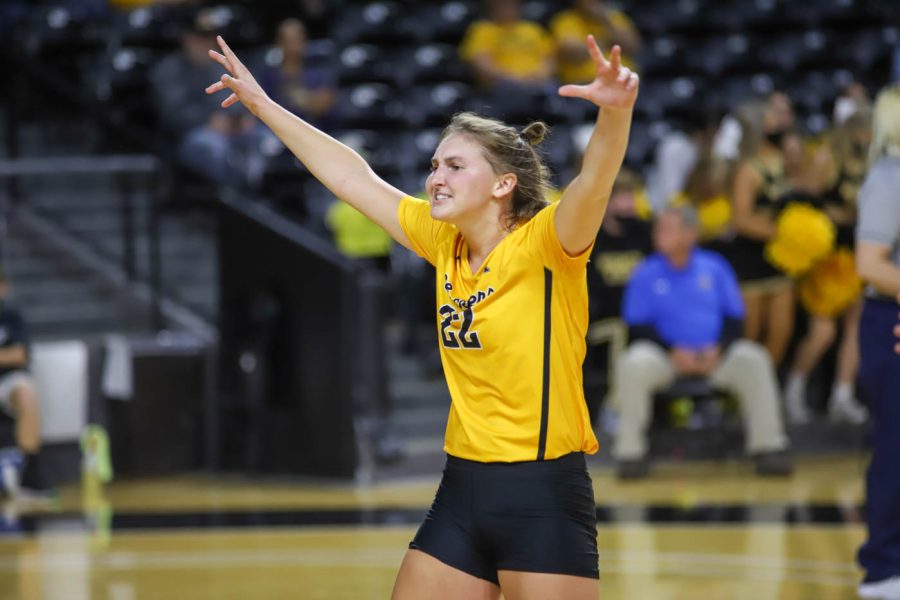 Wichita State freshman Morgan Weber celebrates after a point during WSU's match against UCF on Oct. 1 inside Charles Koch Arena.

For the first time in over a month, Wichita State freshman Morgan Weber made her return to the court this past weekend, after being sidelined due to COVID-19 protocols.

During that time, Weber only practiced a couple times after seeing some action in the Shockers’ season-opening tournament.

“It was pretty hard just not having the equipment and not being able to actually play volleyball. The first couple days back I was definitely a little winded but we’re able to come back and try to find a way.”

Weber tallied a combined 20 kills and 20 digs in her two games back, despite the limited practice ahead of time.

“Mentally it was a struggle but with the help of my teammates, my family, all that they helped me get through it,” Weber said. “You’ve just got to fight through and like this weekend back out and play again. It feels good.”

Weber’s presence on the court has been felt in more ways than one. Shocker teammates and coaches said that they missed Weber’s energy both in games and in practice.

“Morgan has a charisma about her,” head coach Chris Lamb said. “She will always be one of the most fun people to play with. She just laughs at herself, she says funny things but you always see her fighting. It’s a neat gift and it means a lot to her teammates.”

Weber said that she has focused on being lighthearted on and off the court, ever since she started playing volleyball in the fourth grade.

“I just try to lighten the mood a little bit,” Weber said. “If someone’s having a bad day, make them laugh, even through practice try to push them along, encourage them, help them get through it.”

Weber’s energy was felt in her return to the lineup over the weekend, with the Shockers taking Central Florida to five sets and winning their first conference game of the season over South Florida.

“I want to get better, I want to see my team win whatever that means,” Weber said. “I just feel that showing that energy and encouraging people helps both ways, in life and in volleyball too.”

During volleyball games, Weber is noticeably excited after a big kill or point. Weber said that energy is something that’s always followed her volleyball career.

“I feel like I’m an energetic person, it’s not a switch that has to be turned on there, it’s ready,” Weber said. “Being as competitive as I am, it’s just I want to be able to encourage my teammates when they do good things and they get excited when I do good things. It’s both ways.”

Redshirt sophomore Brylee Kelly said that Weber’s presence was felt when she was reinserted back into the lineup this past weekend, especially with her energy.

“Her presence brings the extra step that we need to win and to be better,” Weber said. “To have her back is one step closer to being a great Shocker team.”

Weber said that a key reason to the passion she shows on the court is the close connections everyone has on the team.

“I feel like we can do some pretty great things,” Weber said. “We have a lot of energy. We’ve been a lot closer and getting to know each other has been a fun time, just getting closer, playing with each other, encouraging each other, cheering each other on, doing what we’ve got to do.”