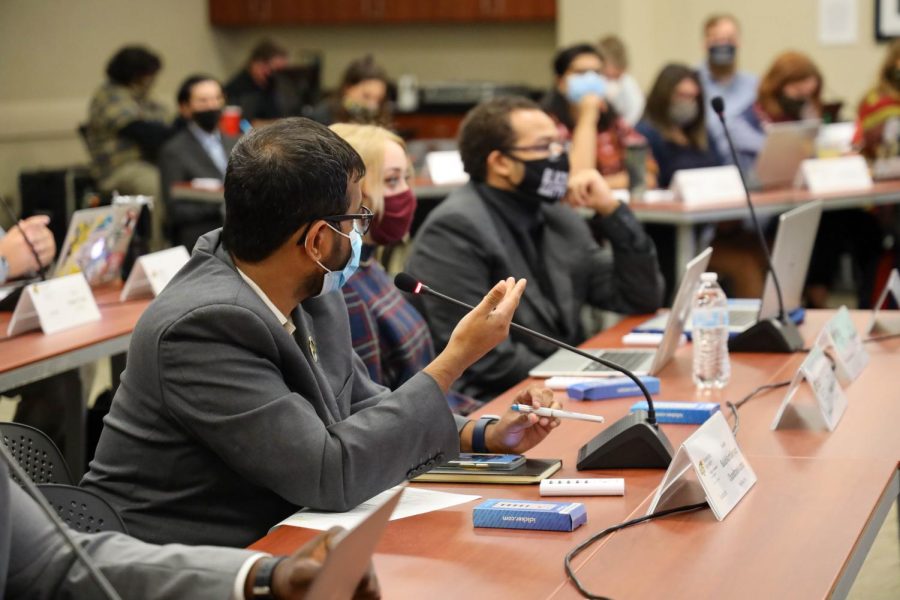 Senators discuss legislation during their meeting on Oct. 13, 2021.

The student senate passed an updated version of the Student Government Association’s code of ethics and conduct at Wednesday’s meeting.

This week was the second read of the bill. During the first read, a number of student senators voiced freedom of speech concerns regarding a section of the bill stating that no member of SGA can make any public or private statements that are “false and disparaging” of the association.

Senator Dalton Dicks was the first to make a motion concerning the bill, moving to strike the paragraph in its entirety.

After much deliberation, the senators did not vote to strike it, but instead to change the wording to be more specific. The updated wording states:  “no SGA official shall make, directly, any oral or written public statements that are false, proven through objective evidence, of the Student Government Association, any of its present officers, or its Constitution, Bylaws, Codes, procedures, and regulations.”

According to the bill, members of SGA can report another member for making false claims. When reported, the person who filed the complaint would be responsible for providing evidence to back up their claim. After that, the Senate Review Board would review the case and decide whether it was valid enough to be taken in front of the senate.

“The likelihood of a he said, she said case making it past the SRB is extremely unlikely,” Speaker of the Senate Jacob Tubach said at last week’s meeting.

Senator Sam Mccrory was one of the senators against this section of the bill. He sparked controversy in April for wearing a ‘white lives matter’ mask at a swearing-in event. Since then, he’s worn that same mask at the majority of senate meetings and mainly asks questions surrounding freedom of speech.

He argued that the bill could be used to target “outspoken minorities.”

“I would also like to point out, let’s say for instance, that I was on the SRB,” Mccrory said. “Would you feel comfortable with me determining whether or not you’re being abusive?”

While multiple senators spoke against the bill for similar reasons, some said that it was vital to targeting misinformation.

“I do think misinformation … poses a real threat,” Majors said. “I think it’s something we should do our best to prevent.

“If people are transparent in a way that’s a lie, then it’s not really benefiting the student government at all.”

The bill passed with 31 in favor and six against.