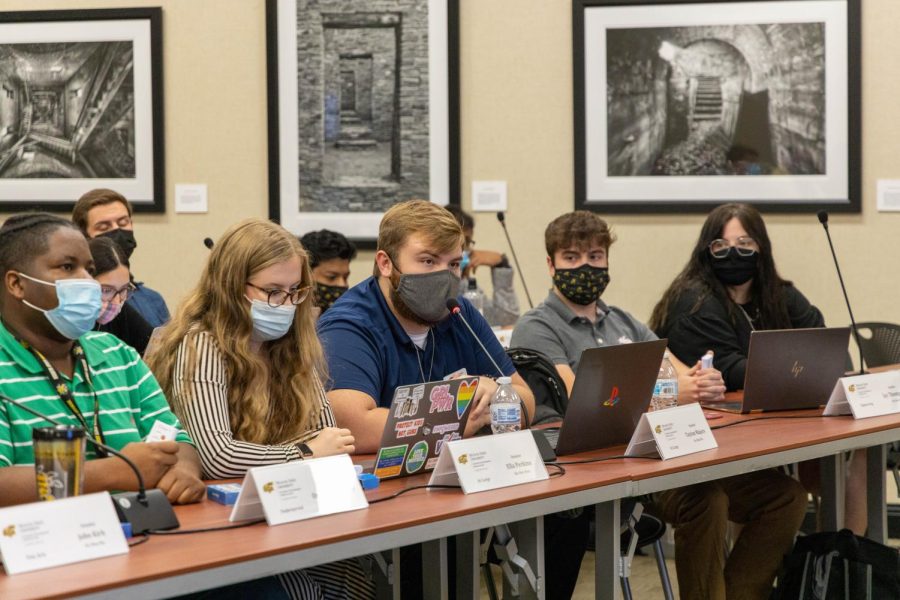 Senators discuss legislation at their meeting on Oct. 13.

“My motion to table had to do with wanting legal clarification on, ‘Is it legal to vote no if you feel that is best representing your constituents?’” Perkins said. “I kind of want that question answered for the senate at large and I think that can pose a broader question of what we are allowed to do with our process.”

Before she motioned to table the bill, she encouraged senators to “abstain” from voting instead of voting yes to avoid possible legalities.

Perkins said this decision came after talking to her constituents, who she said voiced discomfort over the organization.

On a national level, the group has faced significant controversy. In 2019, a leaked video showed a chapter leader shouting “white power” and other offensive phrases. The organization then fired the individual shortly after.

“I’ve talked to hundreds of students … regarding the concerns of the presence of the student group on campus, and I think those concerns are valid enough that as an at-large senator, I didn’t necessarily feel comfortable voting in affirmation of a student group that most of my constituents don’t agree with and I was obviously elected to represent them,” Perkins said.

“I think there is just clearly a legal question here of whether they clearly have the right to freedom of speech under the first amendment of the constitution, but I think there are also valid concerns of students.”

Gallegos stated that the group’s goal is to “promote the principles of freedom, free markets, and limited government. Turning Point USA believes that every young person can be enlightened to true free market value.”

In response to worries from senators, she told senate that the group adhered to university policies concerning non-discrimination.

Tayton Majors, who chairs the committee that sees registered student organizations, said that any RSO has oversight to make sure they follow all university rules and regulations.