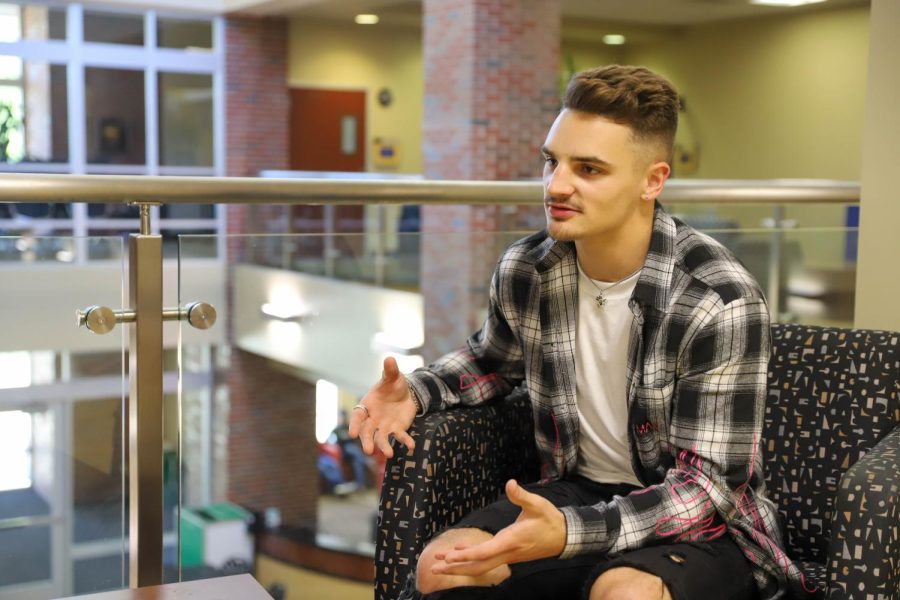 Aaron Tollefson, a sophomore in Sport Management, describes his first year at Wichita during COVID-19.

Aaron Tollefson, a sophomore majoring in Sport Management, said he didn’t want to waste his freshman year during COVID-19 doing nothing.  Instead, he reached out to all of the professors in his department and arranged a meeting to discuss what the program would look like and what he could do as a freshman to excel.

“I think just establishing that connection with professors was worthwhile for me, because I have really good connections with them, they know me, I know them, I’ve been to tons of events with them,” Tollefson said.  “It allowed me to really dive in, and that’s what I wanted to do.  I didn’t want to wait until my junior year or senior year to start doing things around campus and meeting professors.”

While Tollefson said he didn’t have a normal freshman year, he said it was to his advantage because not a lot of people were trying to get involved on campus and he was able to have more opportunities.

Tollefson said his passion for sport management came from playing sports since he was a little kid.  He knew he wasn’t good enough to play professionally but still wanted to be involved in sports.

“I am a firm believer in doing things that you want to do and not just doing it for money,” Tollefson said.  “Life should be something meaningful, and I felt like sports was my calling and I felt like I could make a difference … The first step was just finding which college would be the right fit for me and that was Wichita State.”

Tollefson said that WSU feels like a big and small university at the same time, because there are so many opportunities but he doesn’t just feel like another number.

Tollefson joined CHAMPS during his freshman year when the organization was first created as a scouting director.  The organization is focused on diversity, equity, and inclusion within sports, and Tollefson is currently the Vice President of the group.

“It is a very white male driven industry,” Tollefson said.  “So I think being a part of an organization like that allows me to be more aware of those things that are happening because there is not going to be a change unless the person who is the dominant in it makes a change and is more aware of that.

“I think the organization allowed me to meet people in the sports industry as well as allowed me to be more aware of the industry that I am going into.”

Tollefson said that last year, they did many virtual panels but are hoping to have more events on campus this year and make the student body more aware of the social issues within the sports industry. He said he hopes that the organization evolves by his senior year into a place to mentor students and help put them in places to be successful.

“I think allowing me to be in CHANCE, it allows me to meet new people but also make an impact on other people,” Tollefson said.  “So I think just a lasting impact would be cool on Wichita State, so I think that’s partly why I am so involved on campus.”

Tollefson works in the box office for the Wichita Wind Surge and is also a college ambassador for the OKC Thunder, doing mainly social media.  Tollefson said that he plans to spend his time at WSU exploring different areas in Sports Management to see what career would be the best for him.

“I know in the sports industry you are going to have to start out small, just doing small jobs,” Tollefson said.  “It’s not going to be the job that you want right away.  I think it is just important for me to get in those jobs right now so when I graduate I already have been at those levels, I’ve made those connections and I can just jump into whatever I would like to do.”

Tollefson said his advice to an incoming freshman is to find something that you are truly passionate about, and to try out different areas and positions within the field while you have the chance.  He also said to reach out to professors because they want to help you.

“As far as my experiences, they wanted to give me opportunities and wanted to put me in places for me to be successful,” Tollefson said.  “So I think Wichita State University is a great university, you just have to put yourself out there.”