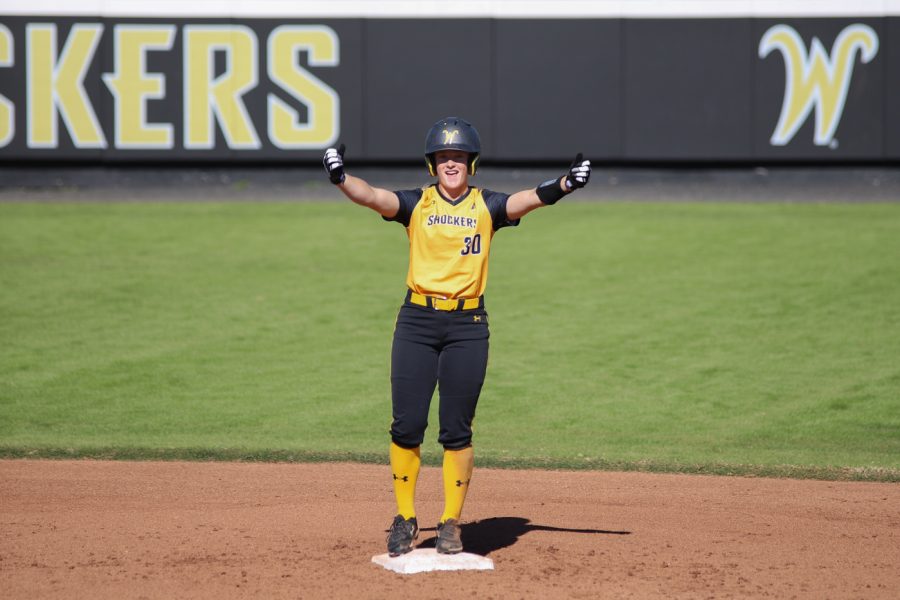 Sophomore Addison Barnard celebrates after hitting a double against Fort Hays on Oct. 17 in Wilkins Stadium.

The Wichita State softball program played their final home game of the fall season on Sunday, with a 13-2 victory over Fort Hay State, for their seventh straight win.

The Shockers started strong with two back-to-back home runs in the bottom of the second inning. At the top of the sixth inning, they allowed 2 runs. They needed to communicate with each other quickly.

Defensively, the Shockers excelled. With more communication, the Shockers were making big plays. Wylie Glover made two back to back catches at the top of the fourth inning, which excited her team up and gave her teammates hope.

The outcome of their game was 13-2, however, the Shockers felt defeated. Their batting was not up to par, and they have a hard couple of days to face their biggest opponent of the fall season, Oklahoma State University.

“The girls are going to play to the level of their opponent,” said Head Coach Bredbenner. “They will probably play well on Wednesday.”

OSU has many returning players offensively and five of their pitchers were able to travel and play in last spring season’s world series. For their fall season, OSU has played four division I colleges, whereas, the Shockers have only played one.

“We’re going to have to elevate our team,” said Coach Bredbenner.

Last season, OSU made it to the world series, but Wichita State did not make it easy for them. The Shockers beat the Cowboys two out of the three times they played them.

“Communication gets repetitive,” McKinney said. “Like Coach B says, ‘It might be the one time you say something to the left field that they didn’t remember, and then the ball is hit at them.”

To communicate with the infield, the outfielders need to pay attention to signals and speak loud and proud.

“On the field we’re the talkers,” Glover said. “We always yell ‘hey, you got me’ or ‘be here for my cut.’ We are always talking because we have loud voices.”

The Shockers will be traveling to Stillwater, Oklahoma this Wednesday to face OSU in the Cowgirl Stadium. First pitch is set for 5 p.m.