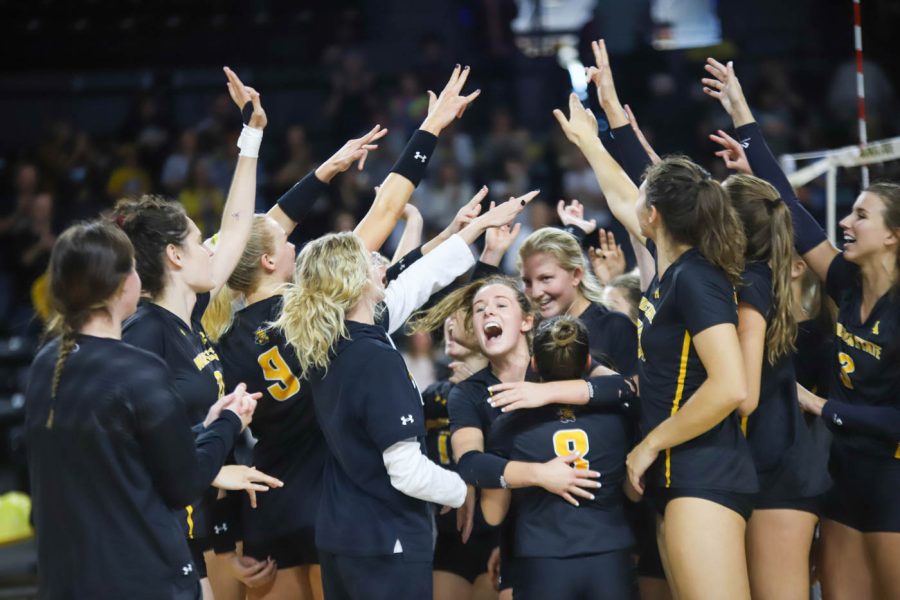 The Shocker volleyball team celebrates their come-from-behind win against Cincinnati on Oct. 17 inside Charles Koch Arena.

Wichita State volleyball knocked off first-place Cincinnati in five sets, for their fifth straight victory on Sunday afternoon. WSU’s victory over the Bearcats is their first since 2017.

The Shockers took the opening set, 25-23, but dropped sets two and three, similarly to Friday’s contest against East Carolina. The Shockers found themselves trailing by nine points in the third set, but cut the deficit to three points. The Bearcats hung on for a 25-21 victory but the late charge helped swing the momentum in the match.

“We were really fighting, getting closer,” head coach Chris Lamb said. “The other night, we rolled a team and for the next 40 minutes we’re looking at the better team on the other side of the net. You just never know what 0-0 is going to do to anybody. We get to 0-0 to start the fourth and we take off.”

The fourth set remained close throughout, with the largest advantage being three points for either side. Kayce Litzau delivered several crucial plays for WSU, providing five kills, eight assists and three digs in the set to lead the Shockers offense. Her kill ultimately won the set 25-23 to force a fifth and final set.

The Shockers jumped out to an early 4-0 lead, after a pair of Lily Liekweg aces, and the advantage grew to 9-2 with two Sophie Childs kills. The Bearcats clawed their way back in it, cutting the Shocker lead to four points but WSU closed out the upset victory, 15-10.

“I think we just really wanted it,” freshman Sophie Childs said. “Even though we had the let down in sets two and three like we had the other night, we all knew we could get out of it just like we did the other night. Even though Cincinnati’s ranked No. 1 it doesn’t really matter. I think all of us wanted to keep this winning streak going and prove ourselves.”

Freshman Sophie Childs tallied a team-high 14 kills in the match and combined for 23 kills this weekend as the team’s starting right-side. Lamb said that he’s impressed with Childs’ growth over the course of the season.

“The Sophie Childs that I met had some self doubt as a volleyball player,” Lamb said. “She would seem frustrated, just coaching her, giving her feedback. As she’s grown so has her confidence and her volleyball. She’s got some physical talent, she’s got the tools and she’s a fast learner.”

Freshman outside hitter Morgan Weber struggled offensively the past two matches, tallying only eight kills over the weekend but still made an impact. Weber’s infectious personality is felt by her teammates and Lamb said her energy and defense were critical to the victory.

“Even though we’ve had two nice wins this weekend without being able to get Morgan Weber anywhere near the scoreboard, she’s part of a winning solution,” Lamb said. “She passes, she plays defense, she serves tough, she’s also someone the other girls like having around. What you don’t see in the stats, there’s just some magic touch that Morgan Weber has on her end.”

The Shockers have now won five straight matches, their longest winning streak since an 8-0 start to the 2020 season.

Childs said that the team’s success has given them more motivation to keep it going.

“I feel like we’re all on the same page on what we want out of the season and we all want to win,” Childs said. “So, I think getting those wins more and more, we don’t want to stop. Keep it alive and everybody wants to win.”

The Shockers will play the next four matches on the road, beginning on Wednesday night at Tulsa. First serve is scheduled for 6 p.m. and can be streamed live on ESPN+.