‘I had a lot of work to do:’ Jed Helker’s development from freshman redshirt to all-conference honoree 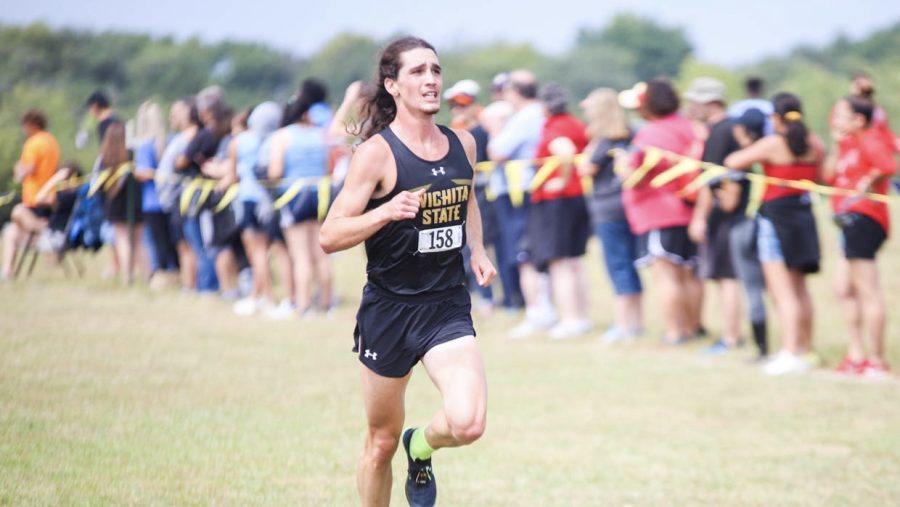 When Jed Helker first arrived on Wichita State’s campus, many around the cross country program felt he wasn’t ready for the Division-I level. So, the Shockers decided it would be best to redshirt him.

Helker joined the Shockers after running at Edmond Senior High School, but races at the high school level were only 6k long. Once he arrived in Wichita, he had to make the adjustment to an 8k or 10k race and was given his first year to adapt to the increased distance.

“Especially cross country, I had a lot of work to do,” Helker said. “The freshmen now are probably 40-50 seconds better than my PR was. Adding on more miles in training and in the races was tough but it was comforting to know that every guy here has gone through that same process. I knew that would take time, just being patient through that freshman year.”

Helker had the ability to sit back and watch that season, getting stronger as the season went on. He competed unattached in four meets, tallying two top-35 finishes, including a 14th place finish at the JK Gold Classic.

As he looks back on it now, Helker said that redshirt season was crucial in getting back to speed while dealing with some health issues at the time.

“I’ve had breathing issues on and off and it was pretty bad that season, I think it would’ve been even tougher to go into a race and my confidence get knocked down,” Helker said. “To be able to just train and work my way up was just a weight off my shoulders and it made me hungry, it made me really excited for the next year.”

Helker competed at five meets for WSU the following season and scored in all five. He was the fourth Shocker across the line at the AAC Championships as well as the Midwest Regional.

“I did come in ready that following year, almost too ready and I kind of just plateaued,” Helker said. “So now, it’s just each year finding a balance of how to go into the season and how you’re maximizing your fitness at conference, regionals, and hopefully nationals, rather than the first part of the year.”

Helker has continued that success the past two seasons, picking up all-conference honors last year and his first ever individual collegiate title this fall.

Helker said that his story is helpful for some of the younger athletes on the team and helps keep the winning culture going.

“Part of the reason I came here was because I saw what Hunter had done with the older guys when I was young and they helped carry that culture and I wanted to be a part of that,” Helker said. “Just to see the success after I graduate would be super special and I think we’re set up pretty well for that right now.”

Cross Country head coach Kirk Hunter said that he’s been impressed with Helker’s transformation as a runner since he first became a Shocker.

“His first season of cross country, we redshirted him because he wasn’t quite ready for jumping up to 8k or 10k distance,” Hunter said. “Now, he’s really bought into everything that we’ve done and because of that he’s developed. I think his confidence level has just increased as time went on.”

With Helker’s quick rise within the program, he has also taken upon a leadership which he said comes naturally to him. Helker has played a pivotal role in WSU’s two team championships this fall, which he said are more important than any individual success.

“I just have a passion for sports but just that drives me to want everyone else to be the best,” Helker said. “I’ve experienced great team moments and that’s even more special than any individual moments. That’s the culture of our team of being each other’s biggest supporters, having fun with it no matter what.”

Helker is slated to graduate from WSU in the spring with a degree in exercise science, but is planning to stay more years to compete and earn his master’s degree. Helker said he’s interested in continuing to run and start coaching soon after that.

“I would love to run professionally,” Helker said. “Even if I don’t get a contract, I still want to train as long as my body is capable of it. After that, I would love to coach at any level but mainly I’d love to do college.”