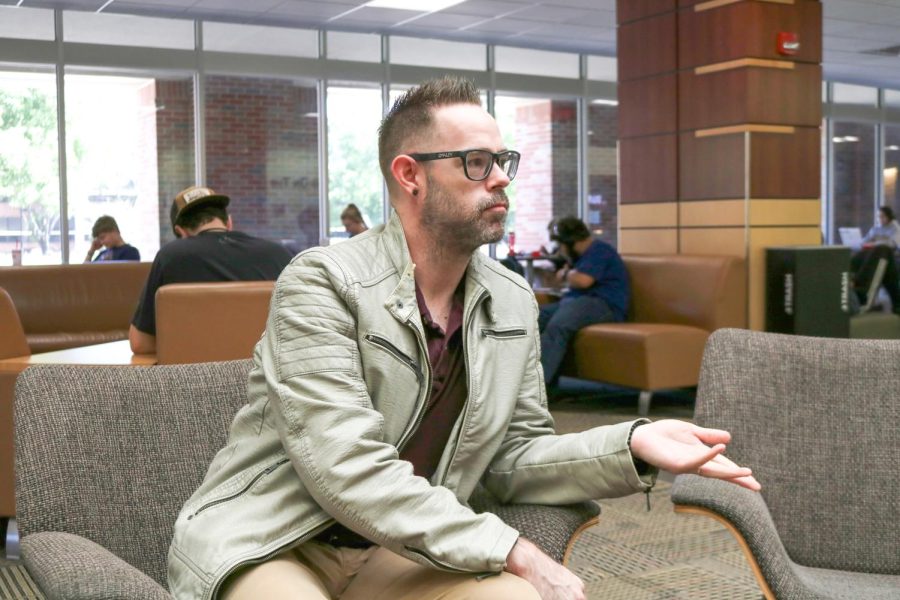 J.W Webster is Wichita State University’s first ever indigenous language instructor, and he has made it a lifelong mission to preserve the language he could speak before he could speak English. He has been teaching Cherokee at Wichita State for less than three months, and is one of only 1,200 people who can fluently speak, write, and read Cherokee.

Webster’s background in Cherokee comes from being raised by his great aunt in Tahlequah, Oklahoma, a Cherokee nation. Webster said it was customary to speak Cherokee at home. However, he also said it did not bother him to learn to speak English due to other relatives speaking it to him and around him.

When Webster was around the age of 13 or 14 he started his mission to preserve the Cherokee language and culture due to noticing that after elders passed away, their family was not speaking Cherokee anymore. He began interviewing elders and writing everything down. He said that if the Cherokee language is completely lost then the culture will be too due to it being a tonal language.

When Webster turned 17, he became a certified language instructor in Cherokee, and has taught language classes for over 20 years in adult education classes and community classes.

“Not that we see men as less than women but it’s because our respect for women is higher than our opinions of men and our respect of men’s opinions because they do carry on life, they create life, they are everything we need to be a complete being,” Webster said. “That’s the number one aspect of our culture that I don’t see in many other cultures. Especially in, you know, contemporary American culture. They think that women are just disrespected and treated very poorly. That goes completely against our own belief.”

Webster lives Cherokee culture in his personal life with his family. He speaks it to his kids and his wife. He said that over the course of him and his wife’s 13 years of marriage, he has spoken Cherokee to her almost everyday of their marriage in those 13 years. Webster said he and his family have a traditional Cherokee prayer they do before dinner.

“When I make dinner we have a communal plate and the very first bite from everyone in the family goes on that plate and then it’s taken outside as a prayer is offered to give back to the Earth before we even partake in the meal,” Webster said.

When it comes to his role in teaching an indigenous language at Wichita State, Webster said that he commends the university for recommending an indigenous component in the linguistics program.

“I believe that Dr. Menon’s [Director of Wichita State Linguistics Program] main goal was to show that Wichita State University goes above and beyond to reach out to every member of their community,” Webster said. “They are also helping bridge a gap in language loss, and they are helping to rekindle lessons that are actually giving back to the Cherokee people in this area, their culture and language that they would not have access to in any other way.”