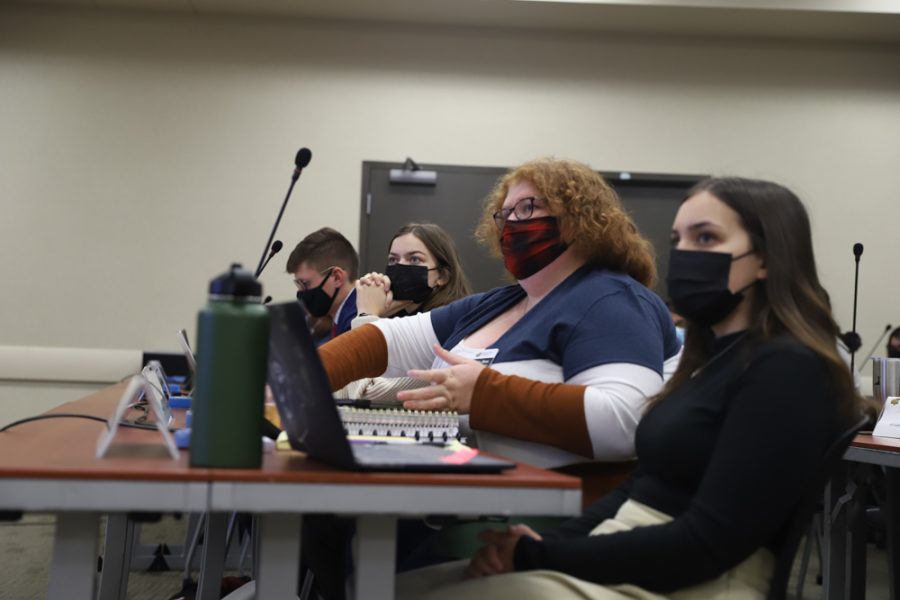 Senators discuss legislation during their meeting on Oct. 20

The Student Senate voted against a bill yesterday that would recognize the right-wing organization Turning Point USA as a registered student organization.

“All of us should be worried about the safety of our constituents,” Senator Victoria Owens said. “It should absolutely be a priority that all students feel safe, and I do understand that promoting groups to have a voice is incredibly important, however you can not have a voice if you are unsafe.”

Senator Kathlynn Short urged students to think about the consequences of the organization, no matter which way they voted.

“I encourage everyone in this organization … to deeply consider the consequences of the type of white nationalism this organization is encouraging,” Short said. “I love America. I am frequently proud to be an American, but it is important to recognize and celebrate the myriad of cultures and identities that come from other great nations, especially those that are represented on our campus.”

The bill was supposed to receive a vote during last week’s meeting but was tabled due to free speech questions from senators.

The Foundation for Individual Rights in Education (FIRE) wrote a letter to the student government on Tuesday, urging the senate to approve recognition to the TPUSA chapter.

“As a public university bound by The First Amendment, WSU and its student government may not deny recognition to a student group based on its views or speech,” the letter reads. “Because this TPUSA chapter satisfies the SGA’s criteria for recognition, the Senate’s denial of recognition would violate the group’s well-established rights under the first amendment.”

This is not the first time the Student Senate has received attention from FIRE. In spring of 2017, SGA denied recognition to Young Americans for Liberty, citing that the free speech group promoted hate speech. In response, FIRE wrote a letter to then-President John Bardo asking to reverse the decision. The Student Supreme Court ultimately overturned the senate’s decision and the group received RSO status.

Senator Ella Perkins encouraged students to vote without legal concerns in the way.

“I don’t appreciate the pressure being put on senators to vote a certain way, I believe you’re all elected or appointed as senators to represent our constituents and it is our responsibility to vote to represent [them],” she said. “Everyone gets to come to their own conclusion on what that is.”

Both SGA advisor Gabriel Fonseca and Student Body Vice President Kamilah Gumbs recommended the students to vote in favor of the resolution.

“As your advisor, I always try to give you the honest truth and honest advice … and [you need] to understand the ramifications of the decision,” Fonseca said. “I want to make it very clear that the senate vote to grant recognition is not an endorsement of the organization, but is recognition that the organization has met the criteria laid out by you in the statutes.”

“I do not fully endorse the message of this organization of course, but it is our responsibility as a student senate to give them the right to be recognized on our campus regardless,” Gumbs said.