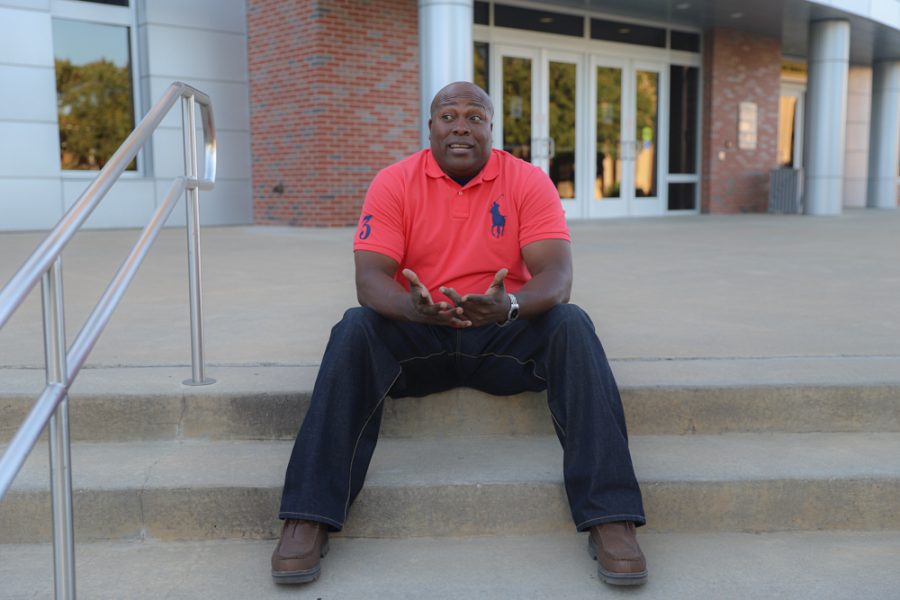 King Sanders, a master's student, describes his passion for shaping the next generation and the path he took to get there.

King Sanders, a student currently earning his Master’s degree in Special Education- High Incidence Alternative Certification, has walked multiple different paths in life that led him to the decision to go back to school while also having a full time job at Eisenhower Middle School.

Sanders first received his Bachelor’s degree in strategic leadership from Southwestern College, and when he didn’t want to do that any longer, he knew he wanted to go into education and heard from other within this program that this would be his best option to get his Master’s degree while also doing something he was interested in.

“I went back to college after 20 years in the military,” Sanders said.  “Most people would say, ‘Ah, it’s too late,’ but no, it’s never too late.  If you have your mind set on something, continue and I furthered my education and within a couple of months, next year some time, I’ll have my master’s degree.”

Sanders said that this is not the path he saw his life going.  He said his father wanted him to be a doctor and he decided to join the military, just like his father who was in the air force during World War Two, and he ended up staying there for 20 years.

“I always thought I would do four years in the military, that would have been enough, and then get my education but I enjoyed my time in the military and it helped me grow,” Sanders said.  “Once I got out and I thought maybe I want to further my education, I was mature enough to take on that task.  Hopefully within the next couple of months I can achieve that goal.”

While also working full-time at Eisenhower Middle School in Goddard, KS, Sanders is also a father to a sixteen year old and a nineteen year old who is also currently attending college.

“Hopefully I am sending them the message that, you know, get your education and try to do your best, anything that you put your mind to.  If my daughters didn’t want to get their college degrees, whatever it is, do your best at it and things will work out in your favor.”

Sanders decided to pursue his second degree at WSU because of the availability of online classes.  He said he has learned many valuable tools from professors that he implements in his own classroom.

“I teach full time and I have a full time household, so you know that can be trying at times,” Sanders said.  “A lot of the professors are understanding, they still will hold you accountable but they are understanding and will work with you, especially if you advocate for yourself.  That is big, so I learned a lot from the different professors and the different courses that I have taken.”

Sanders said his passion for education lies in wanting to connect with the future generation of leaders and shape them to be the best they can be.

“I have two daughters of my own and I want to see them do well,” Sanders said.  “Going into the 21st century, I want to see our country develop well and what better way to do that than to reach out to the younger generation, those that will be a part of that generation when I am gone, why not reach out to them and give them guidance and streamline things that we could do better going into our future.”

Sanders said as a teacher, he thinks it is important to not just focus on the curriculum, but the social and emotional aspects of students, especially after experiencing COVID-19.

“We overlook that because we expect kids to be able to take on whatever we put in front of them, but that is daunting,” Sanders said.  “I have never been a part of a pandemic … I think we have a very very bright future, even you guys as young adults, I think you are so mentallly tough.  Forget about what the naysayers say out there about, you know, they need to do things like we did in the past.

Once he finishes his degree, Sanders plans on continuing to teach in his current position and hopes to eventually move up to the highschool level.  He is also considering and has been told to consider working in administration.

Sanders, who is originally from Brooklyn, New York, said that he encourages others to experience and understand other cultures other than your own.  He said he believes that most people are naturally and inherently good and want to do good things.

“Nobody is going nowhere, we are going to have to learn to live together,” Sanders said.  “We have already integrated as a country, so we need to take that on and move forward as a society.”