More than an athlete: Tyson Etienne gives back to charity with photography exhibit 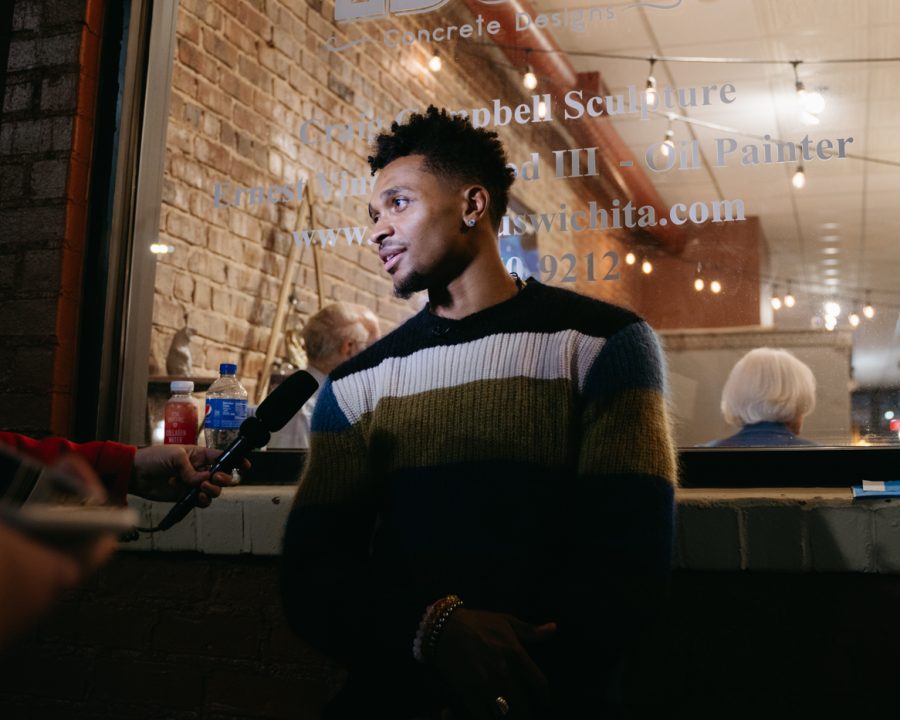 Sophomore Tyson Etienne talks to the media during his photography exhibition on Oct 23 in downtown Wichita.

The exhibition titled, “What do you see?” showed Etienne’s photographs of New York City at the height of the COVID-19 pandemic. The event was hosted by Mud Haus and featured live and silent auctions, and a gift raffle.

“Everybody here is mostly from Wichita, Kansas and they only see New York in the movies and in the pictures and stuff. I wanted to give my own interpretations of the environments. What they see in the frame and in the lens is what they depict from it.”

The proceeds from select photographs will go towards Starkey, a local organization that serves people with disabilities. Choosing an organization like Starkey was important for Etienne.

“That’s the biggest thing for me is trying to give back,” Etienne said. “At the end of the day, I play basketball with the intention and intensity that I have ultimately to inspire people on a global scale. You’ve got to start somewhere so to be able to give back to Starkey is something huge for me.

“People with disabilities are something close to my heart, obviously I lost a family member to it. Just to be able to give back and give people a night on the town is something that I value.”

Etienne initially started a passion for photography during his freshman year of high school after suffering an ankle injury. Since he couldn’t train or work out, his mother suggested photography and he soon found a passion.

“My mom was like ‘you need to take the camera and go somewhere and get out of the house’,” Etienne said. “From that point, I remember going down to that river and taking pictures of the city and I just loved the feeling of it and ever since it’s been a hobby of mine.”

The sophomore guard is coming off his best season as a Shocker, winning co-AAC Player of the Year and leading WSU to a NCAA Tournament berth. Etienne is back in Wichita for his third season of college basketball after testing the NBA Draft waters this past offseason.

Etienne said it was important for him to host the first part of his exhibit in Wichita, after the past three years.

“I wanted to have the first part in Wichita, it’s been important to me for the past three years of my life,” Etienne said. “I’ve grown so much as a person and a player obviously but I wanted to do something to give back to the city.”

Etienne’s teammates were in attendance at the event, which he said their support away from the basketball court is important to him.

“Just to have my teammates have my back on something that’s not on the court, I’m appreciative of it but it also shows me the impact I have on my teammates,” Etienne said. “The fact that my teammates come and stay makes me really appreciative. I’m glad to go to war with those guys and for the season that we’ll have.”