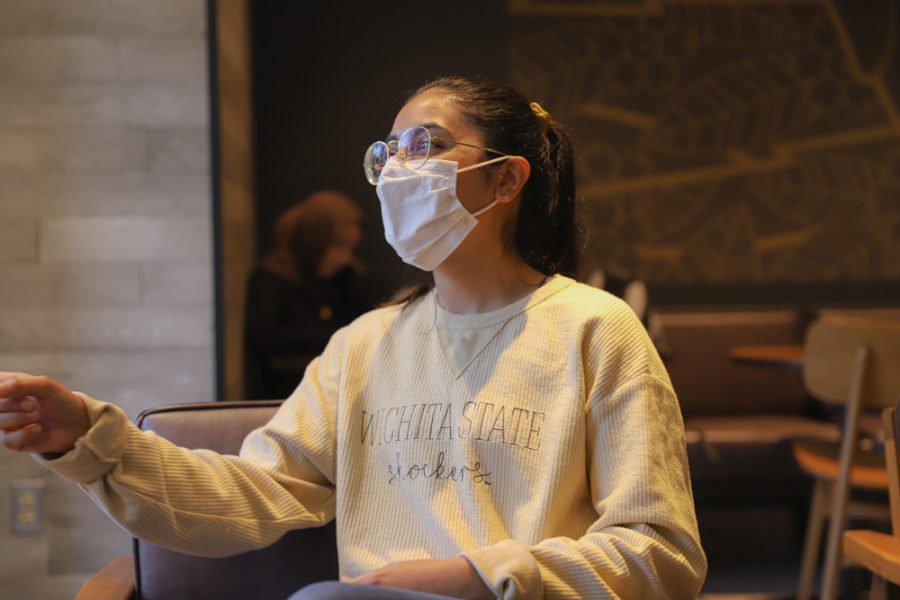 Rija Khan talks about the work she has done during her second year as student president on Oct. 20 in the RSC.

Criminal justice senior Rija Khan is currently serving in her second term as student body president with a new sense of reality.

“I think folks like myself go into the role with so much passion, ready to just do everything,” Khan said. “But then the reality hits that you have to be understanding of the system around you, you have to be strategic with how you approach so there’s a cleaner process not just for you but everyone involved. Also taking input requires a lot of patience.”

Through her role as SGA president, Khan has learned that she wants to go into politics one day and impact and improve the lives of people on a bigger scale.

Khan is originally from Karachi, Pakistan and for her family, her role is still a big shock to them.

“There are times where I still forget that I am the Student Body President so I just do whatever and then I’m like, ‘Wait, no I hold a position where I have to behave a certain way, cannot do certain things,’ but it’s always been an honor,” Khan said.  “Coming from Karachi, Pakistan, a third world country where the lifestyle is different there, no one expected me to come to college at WSU and become the student body president twice.

Khan’s uncle is a graduate of WSU. She said that this made it even more special when she got elected twice.

Khan said that her cabinet has been focused on diversity and inclusion, with the implementation of Diversity Week.  They are also hoping to get the Diversity and Inclusion Senate finalized during this session.

In terms of sustainability efforts, they have been focused on working with The Green Group and their community garden as well as trying to tackle food insecurity by bringing an ICT community pantry to campus for 24/7 access to food.

Khan said that they will hopefully soon be putting out a Shocker Support Locker five-year plan and are also wanting to bring a grocery story on or near campus.

“The decisions that I make reflect the past, present and affect the future,” Khan said. “This position is more than me … I have to be really careful and strategic on how it affects the future of our student body.”

Khan said that while the position is a difficult one, she has learned to lean on those around her.

Khan said that she wants to leave a lasting impact on those around her.

“If people were to remember me, I hope they would remember the passion and the work ethic, and I guess my morals that I brought to this role and how it impacted the student body positively,” Khan said.  “And if that’s not the case, that’s alright because I did everything to the best of my ability to make sure that they were the right things for our students, and hopefully time shows that.”

Khan is graduating with her bachelor’s degree this upcoming May. She said that she is both excited and dreading leaving Wichita State University.

“I am excited for the next phase, because the hope is that I get into a really good law school,” Khan said.  “But I’m also really really sad because I have such good relationships on campus with students, staff and faculty. This feels like home now, I’ve been doing it for the past year and a half now.  It will be really sad to leave the Wichita State University family behind.”