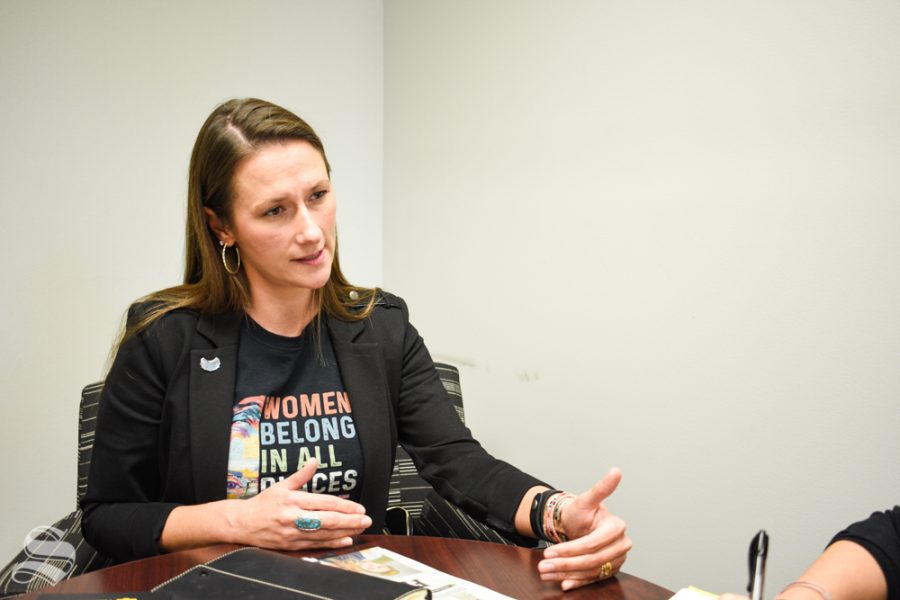 Associate Professor and Director of the Center for Combating Human Trafficing Karen Countryman-Roswurm speaks to a writer from The Sunflower in 2019 about the importance of giving students the opportunity to work with victims directly during an interview in Lindquist Hall.

The Founder of the Center for Combatting Human Trafficking, Karen Countryman-Roswurm, filed a federal lawsuit Monday

The 115-page lawsuit details allegations of male colleagues in the department of social work spreading falsehoods that she traded sexual favors for advancement in the university, and of administrators failing to follow university policy regarding discrimination and harrassment. The lawsuit also claims she received negative statements regarding her Native American heritage and faced retaliation from the university when the instances were reported, among other allegations.

When asked about the lawsuit Wednesday afternoon, President Rick Muma had no comment.

Countryman-Roswurm, associate professor of social work, talked about her experiences in January 2020 during her opening remarks at a local conference on combatting human trafficking. The harassment allegedly started in 2013, when she was an assistant professor, and continued through present time.

The lawsuit accuses Fred Besthorn, professor of social work, of defamation of character, alleging that false statements made by him caused Countryman-Roswurm harm, including her termination as the executive director of the Center for Combatting Human Trafficking.

Besthorn allegedly suggested that Countryman-Roswurm had sex with dean-level administrators to advance in the school, saying that “Native women are known for trading sex to get what they want.”

The lawsuit details that Countryman-Roswurm frequently reported the harassment to then-Dean of Liberal Arts and Sciences Ron Matson, who suggested she not report the cases as it could affect her job and application for tenure.

Countryman-Roswurm has individually sued University President Rick Muma, Liberal Arts and Sciences Dean Andrew Hippisley, Director of the School of Social Work Kyoung Lee and Vice President for Strategic Engagement and Planning Kaye Monk-Morgan. The lawsuit says all parties had knowledge of the discimination, harassment and retaliation, but failed to take any actions, citing “evil motive or reckless indifference.”

Andrew Hippisley allegedly told Countryman-Roswurm in 2018 that she was lucky to have her job and salary “as a woman” and that she should stop complaining about the discrimination and harassment.

The lawsuit also claims that Muma, who was the provost at the time, encouraged Countryman-Roswurm to not pursue any of her complaints. He allegedly told her that it would be better for her to “let go of it.”

Countryman-Roswurm has worked at the university since 2010.

“Wichita State University recently learned of the lawsuit filed by current employee Karen Countryman-Roswurm,” a university spokesperson said in an email to The Sunflower. “The university is committed to preventing and eliminating misconduct, including all forms of discrimination, harassment and retaliation, within the university community. In support of this commitment, the university maintains and relies on a robust system of resources, policies and procedures.

“We are reviewing the allegations and preparing to defend the case vigorously.”