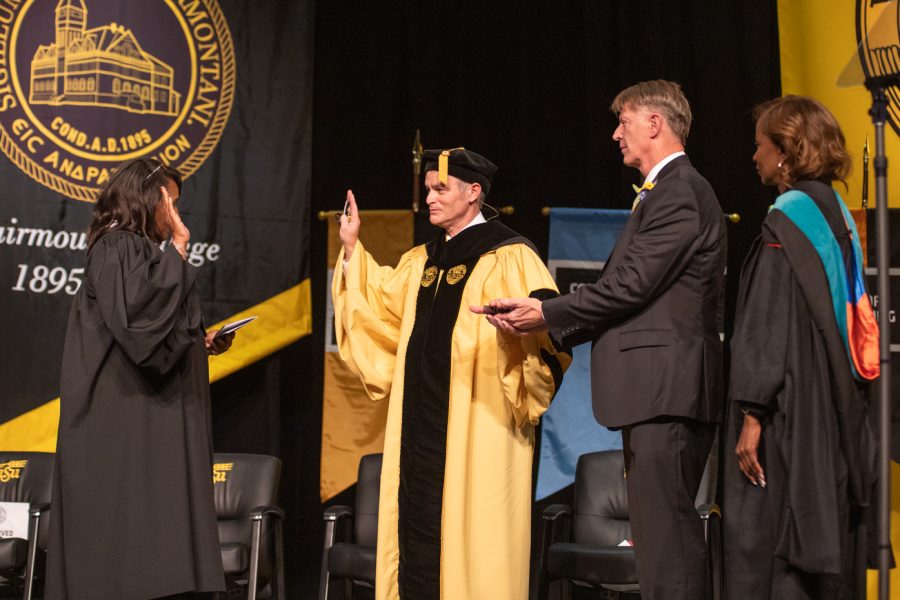 Rick Muma was inaugurated as the 15th president of Wichita State University Friday, roughly six months after the Kansas Board of Regents hired him.

“Every day for the past 25 years, I’ve considered myself lucky to be a part of Shocker nation — as a person, as an educator and a leader — because of the people and opportunities that I’ve found here,” Muma said in his remarks.

“I promise to work hard every day to be deserving of this honor.”

“We have the unique privilege of not just celebrating the new president, but we are recognizing the meaningful contributions he’s already made in this position,” Kelly said.

“I know that President Muma is dead set on creating even more opportunities like the ones available at the innovation campus for students at Wichita State.”

Amy Drassen-Ham from the college of health professions gave the inaugural speech. Drassen-Ham has known Muma for over a decade, and said that she was honored he chose her to give the speech instead of someone who held a higher office in the university.

“I concluded that asking me to speak is a direct representation of who President Muma is,” Drassen-Ham said. “He finds value through the everyday and the common, through authentic experiences and long friendships.

“He’s sincere, conscientious and utterly dedicated to the success of Wichita State.”

Muma started at the university in 1994 as a Physician’s Assistant Program professor. In 2016, he became the associate vice president for strategic enrollment and management and was promoted to provost and executive vice president in 2018.

Muma served as acting president in 2019 after former President John Bardo’s death and again as both acting and interim president in 2020 following the sudden resignation of Jay Golden.

Muma shared his pride that WSU is the only urban public research university in Kansas.

“There are two purposes for this type of institution,” Muma said. “[To] create opportunities for our families and communities so they can have access to affordable education and help our communities solve problems, research, creative activities and service initiatives.”

Muma shared three priorities he wanted to focus on during his time as president. The first is to make higher education affordable and accessible.

“These two words, affordable and accessible, can give a high school graduate encouragement to be the first in her family to attend college … Far too often a person’s dreams are dashed because higher education seems out of reach,” Muma said.

The two others are to support Kansas businesses with a talent pipeline and increasing economic prosperity with higher education.

Muma took some time in his speech to address the topic of freedom of speech.

“It’s the common thread that holds everything together,” Muma said. “All of our priorities, our goals, our initiatives and the foundation of Wichita State, and without that thread, the fabric of our institution will unravel in our classrooms, lecture halls and offices through our campus.”

Across the street from the event, roughly a dozen community members were protesting for accountability from both Muma and WSU administration following news that a professor filed a lawsuit against the university citing “years of harassment, discrimination, and retaliation.”