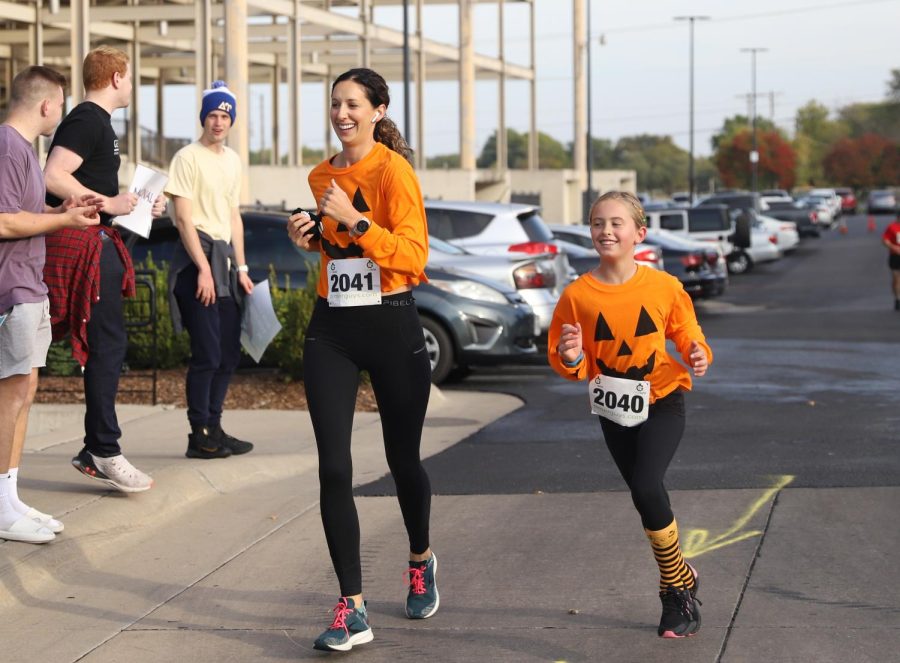 It was a brisk and lively morning as runners prepared for the annual 5k Pumpkin Run across campus. There was a various assortment of people, young children, high school students, Wichita State students, alumni, and small families that attended.

A big blow-up Finish line banner waved in the wind as few people started to show up, stretching out, and doing small sprints to get their joints warmed up. Smiling families embraced and talked as their excited children were jumping around in anticipation for the race to start.

Registration started within Shocker Hall, as registered runners got their numbers and began to get ready, drinking their energy and power drinks. There was excitement in the air, with many people jumping on their social media to take a quick snapshot of their running attire for all their friends to see.

Wu Shock and the Pumpkin Man – a guy wearing a gigantic pumpkin suit – were running around posing for photos with children before the start of the race, as the music sounded loud from the speakers near the starting line, and more people began to show up.

As the racers got to the starting line there was a long line that stretched far back from Hubbard Hall to the dining area at the end of Shocker Hall. There was an assortment of serious runners that were trying to catch a PR, with all their fancy running gear, and also fathers and daughters, hands clutched together running for the memories.

The race was led by a man on a bike that would show the rest of the runners the way, with yellow arrows on the ground showing the direction they were to travel across campus on their journey to the finish line (which was the same as where they started). When the countdown started runners got in their positions and then took off in the direction of Charles Koch Arena.

Volunteers prepared at the Finish Line with drinks, and snacks, with craft tables full of Halloween-themed crafts. There was even a pumpkin painting station for the children to engage in when they got done running the race.

This was not the only race going on, later on, there was a 1k that was packed with small children in costumes, many of who had never participated in a race before. Overall, the event brought in everyone, creating a lively community and fun opportunity to get some exercise in, before Halloween.